Semyon Varlamov Back Where He Belongs

What a week for the Caps. And what a season for DC’s two Boys in the Pipes- Semyon Varlamov and Michael Neuvirth. 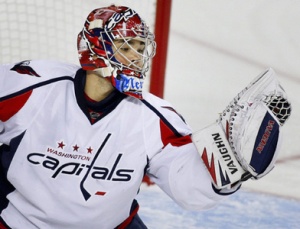 First Neuvirth, our 22-year-old Czech import, was called up from the Hershey Bears to fill for an injured Varlamov – and he doesn’t just excel, he wins October Rookie of the Month.  It’s been a thrill watching this kid respond to some of the shellings he’s received and rarely get psyched out of his cup. And we confess, we’ve always had a certain fondness for various Czech imports.  We’re talking about the beer, Marys.

And now today the other half of our Net team, Semyon Varlamov is named the NHL’s first Star of the Week…this less than two weeks after more or less returning to the ice following what may by a Neuvirth injury.  It’s been a hell of a holiday season for the big Russian (though no less of a kid than Neuvirth) with one shut-out against Montreal, followed of course by his star-making performance at Heinz Field.

Everyone on the team is crucial – we’ve seen what lapsed defense can mean for the score.  But the goalies have it extra…and these two guys have had moments where they’re dazzling.  Whatever your leg workout regimen boys, keep it up.

And we just can’t pass by another shot at Russian-hater Don Cherry.  He may turn up his nose, but in our eyes the Caps European delegation has more than shown their value.  (Now if we can just get Sasha on the board again…)

This entry was posted in Uncategorized, Washington Capitals and tagged Don Cherry is an ass, goalies, Michael Neuvirth, Semyon Varlamov. Bookmark the permalink.