40’s the New 20: We’re really wishing Dwayne Roloson would have stayed on Long Island where he belonged.  The 40+ year old newly acquired goalie apparently has a thing for the Caps, with his second victory – and his second shutout – in as many go-arounds.

Rolie Oldie Goalie is nothing if not consistent.  He even got that Islanders s–t off his helmet, but clearly hasn’t had time to find an airbrush artist in south Florida yet.  Wearing an unpainted mask that RMNB described in a game time tweet as looking like it came off the rack @ Sports Authority. Maybe its time for him to visit Earl Sheib or maaco for a quickie.

Gagne With a Stick: Our boys seemed to pick up the pace in the second, skating on their toes, not heels and it looked like we had a shot to get back into the game. The confidence soon dissolved when Simon Gagne broke away and drilled one past Varly.  3-0.

Same As It Ever Was: Stop us if you’ve heard this before.  Or just stop us.  The Caps performance in the first stanza was flat and the tempo slow, leading to a first intermission no doubt featuring Couch B. yet again singing solo from the “Get Yer F#*kin Heads Outta Yer &*@kin’ Asses” songbook.  Perhaps we need a new songbook.  Or playbook.  But with someone like Roloson in the net, we can’t just rely on those come-back-Caps to win it. 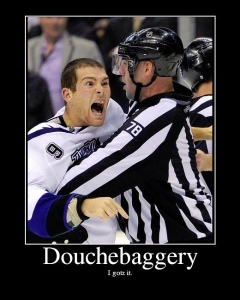 Thug Life: I’m not sure even Clarence Darrow could convince me it was the right for that   common criminal Steve Downie to only get two minutes for his 2nd period fight with relative pacifist Scott Hannan, while the latter wound up with a four minute sit in the sin bin. On cue, Coach Boudreau exploded on the bench during that episode to protest.  We’re starting to get much better at reading his lips.  It’s actually pretty easy since his game night vocabulary seems pretty limited to just a handful of words.  In this case, we agree w/Coach B’s assessment of the zebra’s call.

It’s Not Over Till the Fat…Oh Nevermind: Midway through the third it seemed pretty apparent that we were done, done, done.  Turning on a spit and ready to be served.  Our boys may have still be skating out there, but it seemed mentally they were already taxiing on the runway for the flight home.  Head in the game, guys!  And remember – like you should need anyone to remind you – Tampa now has a 2-point lead in our division, and we still have to play those rat-bastards twice.  I predict revenge.

Freaky Friday: It’s Vancouver on home ice Friday night @ 7p. The Canucks play the Rangers tonight and let’s hope the New Yorkers really take the starch out of them.

Sunday Pucky Sunday – It’s PuckBuddys Day @ Verizon for the 3pm matinee with the Senators!  Sorta.  At least we’ll be there with some pals.  Come find us in section 406 – we’re easy to spot in our pressurized high altitude suits. Maybe the Red Knockers Rockers will send a t-shit our way…or Slapshot will hit us with the burrito cannon.  If he’s not too busy giving free food away to the people in the expensive seats.

This entry was posted in Uncategorized and tagged can we please get a powerplay?, Dwayne Roloson, Scott Hannan, Simon Gagne, Slapshot Over Here!, Steve Downie. Bookmark the permalink.