OK, we’re feeling good today. Good and rested.  Sure, the last few games were nearly as enjoyable as being trapped in a coffin hearing rainwater seep through the cracks.

But it’s a new day!  The Caps are home in familiar settings with warm-ups at Kettler, a sea of Red in the stands, and a post-game round of drinks at RFD tonight for Carlson’s bday.  The Canucks, meanwhile, are tired and cranky, coming off a loss last night in NYC, and no doubt training it down to DC in all the comfort that Acela Express entails (“enjoy the journey!”) 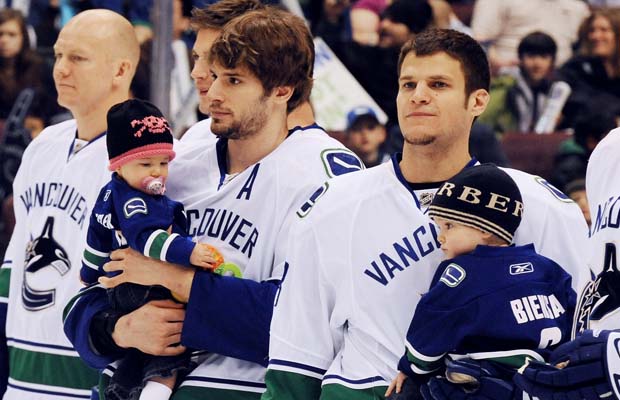 As we’re feeling so good, we’re passing on all the whiffle of what the Caps have to do or should do or aren’t doing or need to do tonight.  Blah.  Instead, we’ve got a quick scouting report on Vancouver’s squad. 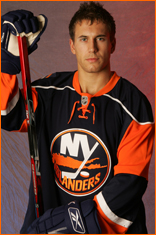 First up we’ll be keeping a sharp eye out for Jeff Tambellini, the 26-year-old winger from nearby Calgary.  They do grow ’em big up there…although truth is that Tambellini, seen here from his stint with the Islanders, is more mite than monster, topping out at only 5’11”.

Kevin Bieksa and Ryan Kessler are next up.  Both are assistant team captains, and appear to have a genuine friendship. 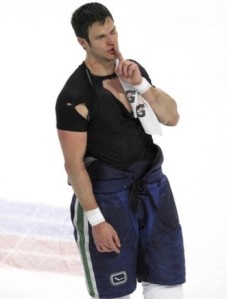 What is it you want us to keep quiet about Kevin?

If this whole hockey thing doesn’t work out, we could see them teaming up as some tedious but hot crime-solving duo of tormented brothers marketed to little girls (and big boys) on a craptacular basic cable network.  Don’t hold your breath; both are pretty damn good on the ice.  And judging rom these photos, even better off.

As always there are others Robert “Long Bob” Luongo – if it’s too easy, we’re simply not going to touch it – and Jannik Hansen among them who merit a little wallpaper.  But we had to note the special friendship between Mason Raymond and Alexandre Burrows.  (Wait, Alexandre?)

“Him and Burrows have their own little thing goin’ on.  Like, movies together, room service…they get one king bed for the room and just sleep on different ends of it.”  Said Raymond, “…ya have to have a good room-mate.  It’s key.”

Oh…OK.  Since we’re in a such a good mood, here’s one slab of cheesecake.  Enjoy the journey!