It’s a three-day weekend, we slept in, and hope that no one got up early just read this game summary.

We paid for 60 minutes of hockey yesterday afternoon (not a lot, $80/seat for section 406), but ended up witnessing only 15 minutes of truly satisfying play.

Ok, it was a win, but it was another one of those wins.

During the first 40 minutes, an uneasy feeling hung over Verizon and the sense of Sens dread was noticeable, despite us owning them so far this season. Horn guy and Loud Goat dude were uncharacteristically restrained; the crowd muted, concerned.  Were we going to drop a home game to a team that should be our doormat?

A Senators goal at 1:12 into the first was followed by a nearly 45 minutes wait to see the Caps get in gear.  An example of the crowd’s restlessness was provided by a guy several rows behind us – in even worse seats. Midway through the second frame he boomed, “Will somebody turn the Caps Game on?!?”

Meet the New Boss(es): Maybe it’s time to end the frustrating vigil waiting for our big boys to start scoring again.  Time after time, it’s the Caps’ lesser magnitude stars that make it happen and bail our asses out.

Brooks Laich made it happen and tallied his first goal since December 15.

Nicky Nineteen may still be goalish slumpish, but that faceoff win setting up John Carlson’s gunshot, proves he’s still the man. Does he lose a faceoff?  Backstrom may still be snakebit when it comes to the net, scoreless in 20 games, but he works hard, plays hard and makes plays and goals happen.

And maybe it’s time to consider John Carlson in the top flight of superstar Caps, not just a hot rookie.

We know he has a sizable fanbase out there – judged by the throngs of women pressed up against the glass during warm-ups, all swooning, all cheering as he zipped by section 120. 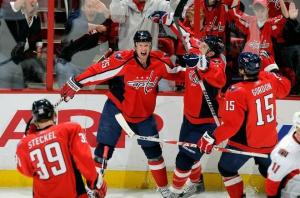 The worst kept secret in DC is that we love us some Jason Chimera.  Getting his pocket picked/poked in the Canucks game, which set up a goal by one of the creepy twins the other night, must’ve been disheartening for the guy.  Whatever – he shrugged it off and was loaded for bear in yesterday’s matinée, and racked up his first goal since December 21.

Chimera’s game sealing goal in the third, the carom shot off Sens goalie Brian Elliot was a perfect lesson in geometry – the angle of incidence equals the something something.  Dunno, we flunked geometry, too.

The Silver Lining:  We don’t know what proved to be the spark in the third – Karl Alzner getting slammed into the boards which led to that PP, or Coach Boudreau’s 2nd intermission shriekfest. We’re tied again with the Bolts for first place in the division.  We stemmed the three game losing slide.  The PP finally showed some signs of life – the first one to hit in 11 opportunities.  The last 16 minutes of the game proved to be a textbook example of efficiency: 3 goals on 9 shots.

The Road Ahead:  You don’t need to sit through that well-worn Hadeed TV spot again to know that the week-long roadtrip ahead is going to be a long haul. The filthy Flyers tomorrow night may be the biggest challenge but the irksome Islanders on Thursday and the Leafs/Laughs on Saturday – teams we should beat – could be crapshoots because of our continuing inconsistent efforts.

Undisclosed Location: The news of Sasha landing on the IR from his LBI hit us hard.  We want to see him back on the ice first, then of course, back to his scoring ways.  We wish him the speediest of recoveries.  And we leaned that Mike Green’s absence on the ice @ Kettler today was due to a case of the sniffles, and nothing more serious. Phew!

Should Old Acquaintance(s) Be Forgot: It was team day yesterday @ Verizon for PuckBuddy Craig.  An ad hoc high school reunion of five pals from the Dazed and Confused years was put together at the last minute.

Among the attendees were three guys he was lucky enough to play football with for four years.  Under the tutelage of the late and mostly great, Coach Barney Sullivan (from the Jim Thorpe School of Football, minus the leather helmets), we grew into men, forged lifetime bonds, and became family many, many years ago.  Nearly 20 years after his passing, we still speak of Coach Sullivan in hushed tones and with reverance. We’re not convinced that he can’t rise from the dead and brutalize us one more time.

Escorted by class president Mr. Pink, Baron gridders Chuckwagon, Texas Tommy and JT turned out to root, root, root for the home team, the very first NHL game for the latter two. They loved the show that both the team and Verizon put on and we’re glad they got to witness a (mostly) great effort and a much needed win. But they had to wait 45 minutes for it to happen.

“Better late than later,” was a saying our JV coach, the remarkable Vito Costanza used many times.  It still rings true.  “Don’t rest on your laurels,” were more of his words of wisdom.  We seriously hope that the Caps take that one to heart.