Recap: Blown on the Range(rs)

“Well since our Varly got injured, it happened to Neuvy as well, our boy at the end of the lonely crease set up Holtby Hotel…”

Still Hot B: Hats and helmets off to our boy Braden Holtby. 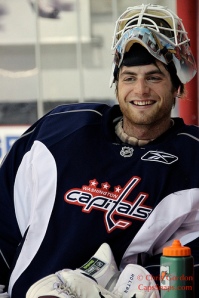 He rode a nice little streak going into last night’s game – stopping 87 of the 90 shots he’s faced since his return from Hershey and the January 20 start against the Islanders.

The guy was working it last night, the Toronto-reviewed Gaborik goal that made it in, looked like a fluke.

Braden’s shootout failings were attributed to his not having similar, high pressure experiences at the NHL level, and possibly his lack of practice defending those rifle blasts on a clean sheet of ice.  Coach Boudreau described Braden’s shootout performance, his first in the NHL, as “overly aggressive.”

Commenting on his young net-minder’s overall night, he said Holtby was “really good, and that with the Gaborik goal, “The Rangers didn’t even know they scored.”

Out Gunned: If blame is to be placed anywhere last night, it has to lay on the doorstep of the offensive effort. 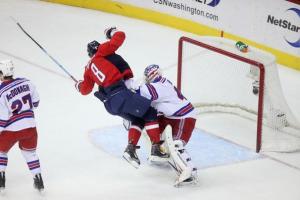 Can you hear me knocking? Photo: Jay Westcott

The Caps were outshot in each of the periods and after regulation, the margin was 27 for the Rangers and 17 for us.  We looked like we played a solid sixty minutes – razzle, dazzle and hustle from Alex, Hendy again the stud, and some feisty D, but if the puck doesn’t go near the net, the puck won’t go in the net, right? 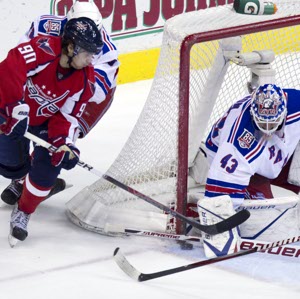 MoJo on a wraparound Photo: AP

PuckPuppy Jay Beagle looked strong, Nicky seemed to put in a strong effort and Mojo looked like he was in the thick of things most of the evening.

Great Scott:  Veteran D-man, the studly Scott Hannan racked up his 799th game last night and got his first point in Caps gear, an assist along with Mojo on the Hendricks goal.

The Kiss of Death: Matt Hendricks, the go-to guy, really lit the place up in the shootout last night.  Good call, Coach.  And Nicky – WOW!  So smooth. You made that goal look effortless. 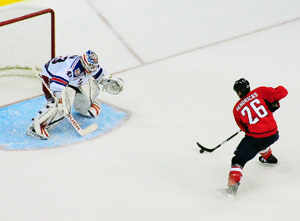 But ouch, we needed more.

The Caps’ OT performance has been so dismal lately – zero for the last seven games, nine of the last ten, and the shootout numbers are even worse; we’ve dropped eight of the last nine of those match-ups.

The Road Ahead:  Tomorrow night finds us in Atlanta in a contest with the struggling Thrashers.

The ASG break and game follows, then we host the Habs on Monday evening, February 1. 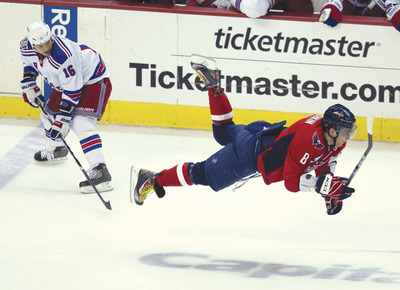 Because we love aviation photos:

“Fasten your seatbets and place your seats and tray tables in the upright position.” 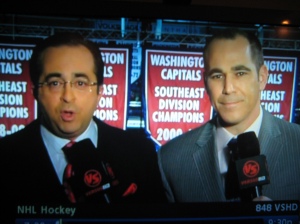 Losses are better with Locker!

Proudly serving gay hockey fans and players since 2010
View all posts by Craig →
This entry was posted in Uncategorized. Bookmark the permalink.