Tonight it gets serious. But first we need to take what may be a painful look back at why many Caps fans dreaded a Ranger first round matchup.  The Number 1 seed facing Number 8; what’s the big deal, right?

November 9 saw us manhandle the Rangers 5-3 in the (dark in the daytime) Garden. The December 12 game was an outright bitch slap and they crushed us 7-0, again at MSG. January 24 saw minor redemption in a 2-1  shootout loss, perhaps proving that the previous game was a fluke.

The previous game was not a fluke – a month and a day later, the filthy fucking Rangers humiliated us on home ice, 6-0, a game that we’ll forever remember as “The Baggy Pants Farce” or “The Friday Night Follies.”

Caps fans have been haunted by those two thrashings ever since the playoff lineup started to gel a few weeks ago.  Saying novenas, praying for the Sabres, hoping NYR got edged out so we could take on the Canes.  All to no avail – we were destined to play this mob of hooligans, who despite their gay-friendly fashionista winger, are emblematic of what many detest about New York City; coarse, obnoxious, smug and an inflated sense of self-importance.

So be it.  We’ll shake off any sense of dread we may have and put our faith in the Boys in Red.  Ahead of puck drop tonight, we hereby exorcise any demons that may linger at Verizon.  And we know just the man to help us out with that gruesome yet necessary task.

We met Geoff Burke on that fateful February Friday evening a few minutes ahead of the Ranger beat-down.  Geoff is a crackerjack photographer for Getty Images and US Presswire, who often makes the trip from his home in Richmond to shoot DC sporting events.  He was on assignment that  night and we’d long admired his work – killer hockey shots in print and online in some of the nation’s top outlets.

We got to chat for a few and pitched him then on the idea of a 5v5 feature (five questions, an overtime and a shootout). He readily agreed, and as typical for us, we got distracted.

We reached back out to Geoff this week thinking that a photographic trip down Ranger Misery Memory Lane might be just the kind of shock treatment we need to once again face those rag-tag ruffians.

PBs: You cover a lot of sporting events as diverse as the NFL and NASCAR.  What special or unique challenges does hockey pose as a professional photographer?

GB: “I am fortunate enough to cover pro and college sports all across North America (just about every sport there is, it seems!), but hockey does pose a few unique opportunities and challenges. It’s one of the few sports where you are a little more limited in where you can position yourself (at least at ice level) and especially what your range of view is from a given location; unless you have a position in a hole in a corner of the ice, there’s no way to see the majority of the playing surface, which obviously limits your opportunities to get really good stuff.

That being said, there are also some pretty creative things that can be done with what you have to work with on the ice. Of course, going to a higher level makes things a bit easier – and sometimes the frames are even a little cleaner, especially when the action is in the center of the rink (remotes are a whole different matter!).

With regard to light, we’re lucky that at Verizon, the light is actually very good, so it’s possible to get proper exposures without sacrificing shutter speeds, so we can still freeze the action and have good, crisp, sharp images. 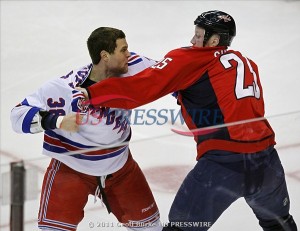 As with any sport, the key to getting good action is to be ready for it…you have to anticipate what may happen in a given situation. If you try and react to something as it happens, chances are you’re going to get a really good frame of absolutely nothing, because it just happened.

You’ll be chasing the entire game and not get anything impactful. Knowing the sport, the players, teams, tendencies, strengths and weaknesses, etc. all can be helpful in trying to anticipate what may happen in a given situation. With hockey, the game moves so fast you really have to be aware all the time.”

PBs: Over the course of your career you’ve shot on film and have made the transition to digital. Digital has its obvious advantages, including the quick turnaround on tight deadline, but what if anything, do you miss about film?  Are there instances in which you still use it?

GB: “It’s funny, sometimes we get to talking about the good old film days, how good Fujichrome Velvia film was for certain things, some of the old bodies and lenses we used (and in some cases still have). 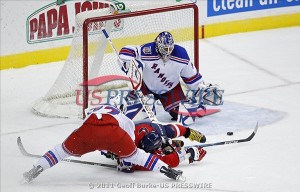 Digital SLR’s have come such a long way, we really have pretty good quality for most shooting situations, but for specific things, there are still shooters who try and use medium format whenever possible.

To be honest, I have not loaded a roll of film in about four years, but I’m pretty sure I could still figure it out.”

PBs: What is it like working for a photo agency that differs from working for a specific outlet?  And can you speak to the pecking order @ Verizon on game night – like what happens when SI is in the house?

GB: “Working for multiple agencies actually has its advantages, the biggest being the opportunity to choose a schedule a little more than some. 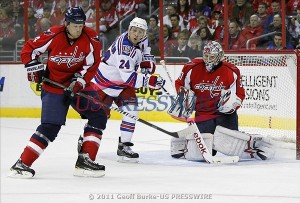 As far as having spots assigned on game night, we’re pretty fortunate to have someone like the Capitals team photographer, Mitchell Layton, running the show; he’s always been able to juggle everyone’s needs about as well as can be done; matter of fact, the entire off ice Capitals staff really does a fantastic job game in and game out.

When an outlet like SI sends their shooter (normally hockey shooter Lou Cappozola), or Getty (since they are NHL) obviously the team needs to make sure that their needs are met. It’s always a balancing act, and everyone works together really well here, so it always works out.”

PBs: Using this shot of Ovechkin and Crosby at the Winter Classic as an example, published USA Today and the LA Times respectively, they were cropped differently. After a game you upload your shots to HQ.  Is that where your job ends or do you have any say over the layout? Do you ever shake your head after seeing you work in print, or are you ever pleasantly surprised?

There are so many things to take into consideration when looking for a good frame (composition, focus, exposure, background, etc) and you don’t have a ton of time to analyze each frame you take, so you look for the best examples of what’s happening in the game and crop them in a way that lends itself to that frame – you never know how an outlet might use a particular frame, so you just try to get it as right and as clean as you can and hope that it doesn’t get chopped up when it’s used! 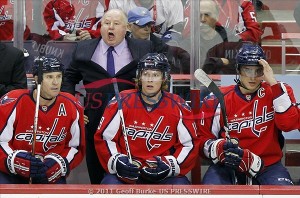 But photographers always know better than editors how an image should be edited, right?

Whenever I see something used and it’s been altered somehow (whether it’s tones or crop), I know there’s a reason it was done that way…nothing more to do about it; at least it was an image of mine that got chopped!”

PBs: There are scores of iconic sports photos like the ones below.  What are some of  your favorites and who do you consider among the best shooters?

GB: “There are so many iconic images, it’s hard to pick a few, but for me one the most memorable images is Heinz Kluetmeier’s Miracle on Ice jubilation shot.

Few images say as much without a word – as a matter of fact, I believe it is still the only Sports Illustrated cover image that had no words on the cover.

And actually, you guys are pretty fortunate to have some of the most talented sports shooters in the country right in your backyard, Simon Bruty, Mitchell Layton, John McDonnell – and others – from the Post, to name just a few.”

PBs: Overtime: What advice do you offer for someone wanting to get into your line of work?

GB: “For anyone interested in photography, whether it’s sports or something else, learn as much as you can about light; photography is ultimately all about light.

Geoff Burke: Another day at the office

For someone who wants to take good sports pictures, once you get proper exposures, focus on trying to anticipate the action, get to know the sport a bit, and don’t forget about the emotional side of athletics.

Sometimes the best images from an event have nothing to do with the action on the playing surface.

Above all, just have fun with it – it’ll show if you don’t.

PBs: Shootout: If you could go back in time to cover one historic sporting event, which one would it be?

GB: “The Miracle on Ice, hands down.”

Thanks Geoff.  Keep up the great work.  And good luck Caps. Do some great shooting yourselves tonight.