Why We Love Our Russians, Even if Others Don’t

So first off – what an f-ing game!  Almost everything you could ask for: great work in the net by Neuvy,

terrific effort up and down the lines, Good Sasha, and a big fat win.  Some may groan about it being such a low-scoring affair, but we say frack off.  That first power play?  Didn’t yield anything except a reminder of how much we heart John Erskine.  The Backstrom slapper to Lundqvist?  How about an order of Swedish Special sauce on that?  In all, our Caps played with pepper throughout, stuck to the plan, and gave Coach Boudreau the best excuse yet to spill jelly on his tie.  Boyd Gordon?  Totally shelled Lundqvist.  And how good was it to see Green back on skates? 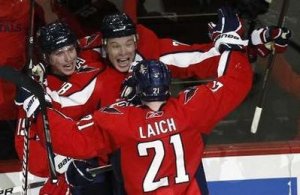 Another thing – from where we were sitting (in the man-cave) it seemed the crowd never waivered.  Each blocked shot, each moment of disappointment, they came roaring back louder than before (even though the towels idea smells a bit much of Pittsburgh.)  If you don’t want your guys to tire, you better not give up in the stands, and they didn’t.

The parade continued this morning when we were checking headlines online and found this from the Washington Post:

Sadly, someone tipped them off and they’ve scrubbed any references of “Semin” and “blast” from their site.

Best of all, we get to say: “Don Cherry, eat it!”  When our Russians weren’t busy scoring, they were setting up someone else to do so – or at least try really hard.  Ovi’s Sabre dance has now been replaced by his victory thump – as in when he playfully threw Sasha to the ice (as if he doesn’t spend enough time there anyway.)

In short: we love our Russians.  And we assumed Russians did, too.  But maybe not so much.

For a while we’ve been kicking around an idea of interviewing someone from VOA’s Russian service about how they’re covering the playoffs – and their homies forming the core of the Caps.  (Yes, PuckBuddy Doug also works at VOA, but we thought they might be better than, say, RT because VOA’s audience is strictly Russian.)

So we noted this story yesterday on VOA’s Russian site, and it raised some questions.  (Last parenthetic: VOA Russian now only exists online following Pootie-Poot‘s decision to scrub Russian airwaves of anything VOA.) 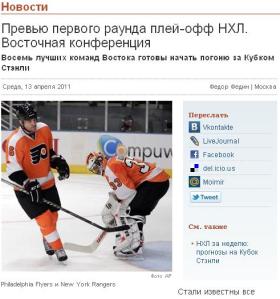 OK, we don’t read Cyrillic either, but Google does. Well…kinda.  The lede – “Became known to all the teams that will participate in the NHL playoffs” – reads more like a Yakov Smirnov set-up.   And the subhead – “Washington Capitals (the first number of seed) vs. New York Rangers (eighth edition of planting)” – gives off  a slightly smelly-hippie whiff.  Thanks for that, Google!

But here’s our questions.  One, this – and just about every other NHL story on the site – was written from Moscow.  Moscow? Wouldn’t someone a little…closer…to the actual games get a little more of the feel of what’s happening?

And two, there was an odd omission in the section on the Caps.  See what you think:

“Despite the status of the favorite, analysts did not rush to give the victory of “Capital”, which lost to Rangers’ three games in a row with a total score of 1:15.  Big factor in the outcome of the series will play Rangers goalie Henrik “King” Lundqvist – whether a star Rangers play at the highest level in several games after tiring of a series of 26 matches in the starting lineup and arduous struggle for getting into the playoffs?  Also important is whether “Capital” ready to play in the playoffs under new defensive system imposed by the club’s coach Bruce Boudreau in the course of the season?”

Yes, a lot of eyes were on Lundqvist, duh.  But an equal amount of scrutiny fell on Russian sons Ovechkin and Semin (and no doubt Varly too, had he played.)  Arguably even before the game, they were the deal-makers or breakers.  Beside – they’re Russian!  Wouldn’t Russian hockey fans in Russia be interested in Russian hockey players in America?

Whatever.  We just want to say “Thanks, Russia!” for sending a few of your treasures our way.

UPDATE: Apparently, we’re NOT alone.  Check out this coverage of Sasha’s OTGWG by a Russian sportscaster.  We can make out: “Vaushinkton Cahpitahls”, “Gooal” and “Seymin.”