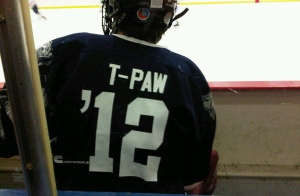 To hear the current crop of GOP 2012 hopefuls tell it, the first two years of the Obama administration have been an abject failure on both domestic and foreign policy (notwithstanding the bin Laden scalp).  Ask DC hockey fans about Obama failures, and Democrats, Republicans and Independents alike are in complete agreement on one singular shortcoming – that despite an aggressive advocacy campaign, he has failed to attend a Caps game at the Booth.

The field set to run against Obama is starting to both gel and winnow at the same time – Newt Gingrich is already on life support, Trump, once known as the “short fingered vulgarian” (if you’re old enough to remember Spy Magazine), declined a run, as did Mike Huckabee, and just yesterday another hopeful candidate bowed out, Indiana Governor Mitch Daniels.

For those of you keeping score at home, the highly regarded Daniels was thought to be the franchise player that could get Team GOP into Cup contention; a brainy, fiscal conservative, with a deep resume who also hoped to declare a “truce” in the culture wars.  That remark in and of itself caused heartburn on the right side of the party, because when they say “culture wars,” it’s usually a thinly veiled euphemism for bashing teh gays. Whatevs, bring it on. 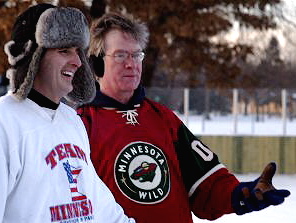 The field of Republican candidates grows by one today with the official announcement of a guy who has spent some time on the ice; former Minnesota Governor Tim Pawlenty is tossing his  puck onto the ice, and he could be the candidate which the much sought-after hockey voting bloc may be looking for.  Known in some circles (mostly Beltway headline writers) as TPaw, Pawlenty played for his high school JV team, the South Saint Paul Packers. 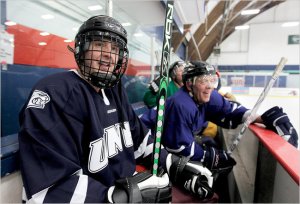 Pawlenty who counts Gretzky and Gordie Howe (“He was not just a finesse player, he was a scrapper and a fighter.”) as the best players ever, works hard to establish his blue-collar bona fides saying that he’s “pro-beer and pro-hockey.”   He’d been known to use a certain hockey metaphor in his speeches since his first term as governor, that he credits Gretzky with:

Hockey has been a consistent theme during the first baby steps of his presidential campaign. In March, he was part of a pick up game in Concord, New Hampshire, and according to press reports logged a goal from “about an hour” ToI. He sported a dark blue UNH sweater with “T-Paw” across the back and wore the number ’12. According to the Politico, Pawlenty likes to watch the brawls, too:

“The just-out-of-office Minnesota governor confesses a love in his new book for “watching two guys, gloves down, helmets off, pounding each other while the ref stands back and lets it happen.”

He acknowledges that fighting “seems barbaric” to outsiders, but he says that he’s “learned lessons that have applied, surprisingly, to my career in politics.”  “Occasionally, if I really need a good mental break and I can’t get out on the ice for one of those old-timers’ games, I’ll sit at the computer when I’m home at night and pop over to hockeyfights.com to watch a few of the latest videos.”

In Pawlenty’s 2012 exploratory committee announcement video, his voice-over intones, “We the people of the United States will take back our government, this is our country…” as gauzy, feel-good images of him skating with a bunch of mites are intercut with cliche shots of flags, families, farms… and Ronald Reagan, of course. Inspirational music swells up underneath.

We’ll see if Pawlenty is really the hot prospect his handlers and supporters make him out to be. He could very well have the hockey vote sewn up. That depends of course on whether this key voting bloc digs any further into his use of that Gretzky metaphor.

It seems there’s some controversy on both its origin and whether or not it’s simply a smart hockey strategy.  And TPaw wasn’t alone as it turns out in misattributing the quote.   From the Fast Company Consultant Debunking Unit we learn about the true author of the phrase, The Great One’s father, Walter, said it, and it was none other than “Mr. Hockey,” Gordie Howe, who set the record straight.  Howe also expanded on just how crappy the advice to “skate to where the puck is going,” actually can be:

“It’s not really the greatest piece of advice I’ve ever heard,” he says. “Besides, sometimes you don’t want to be where the puck is going. One time, I was anticipating a pass from [Ted] ‘Teeder’ Kennedy and was leaning over to get in the way of it, when Kennedy, following through, swung his stick in my eye. I had double vision for two months and had to sit out the rest of the season.”

Also weighing in on the Pawlenty strategy is 198o US Hockey team coach, Herb Brooks: 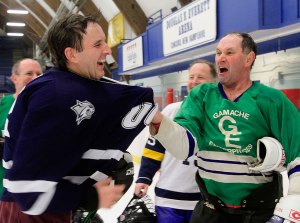 There you have it – perhaps the first crisis of the Pawlenty candidacy, “Gretzky Gate.”

TPaw’s announcement tour takes him to Iowa, Florida then DC on Wednesday where an aggressive press horde will demand clarification and answers on this controversy.  We hope to be on hand at his press conference with questions of our own.

We want to hear his thoughts on other key substantive issues: the trap, the trapezoid, Russian relations (Ovechkin, Semin, Varlamov and Kuznetsov ) and if he has any clue at all on how to fix the Caps power play. If he can answer the last question to our satisfaction, he may very well have a shot at our vote, culture wars aside.

Proudly serving gay hockey fans and players since 2010
View all posts by Craig →
This entry was posted in Uncategorized, Washington Capitals and tagged 2012, I-Team Investigation, Road to the White House, Tim Pawlenty. Bookmark the permalink.