Patrick Burke: In His Own Words

Patrick Burke has a job to do. Not his day job as scout for the Flyers.  But it does relate to hockey, and to his best friend and brother Brendan.

It’s January, and Patrick Burke is hosting the GForce Hockey Invisible Athlete Speaker Forum, held at the University of Denver. The panel got some coverage earlier this year, but now we’re able to share the tape of it.

Watching Patrick moderate it, you get the sense he’d rather be listening than talking. But Burke has something to say:

Homophobia has no place in sports.  The anti-gay slurs in the locker-room must end.

He’s joined on stage by three athletes – David Farber, former captain of the University of Pennsylvania hockey team, Brandy Ranshaw, a former pro with the US Ski Team, and Andrew Goldstein, the first American male team-sport professional athlete to be openly gay during his playing career.  All of them know what it’s like to be part of what Farber calls “a second family” – a team.  And, like Goldstein, they all know what it’s like to be what he calls “that kid in the corner, the quiet one.”

The one with a secret.

“You’re always in the locker room, you’re on bus rides, at away games,” says Goldstein, these days working on his doctorate in microbiology.

“Those are your buddies, those are your best friends, as Farber said they’re like your second family.  And it sort of kills you not to be able to share a part of you with them.  But you hear words in the locker room that make you feel a little bit less.  It just sort of wears on you.”

It wears harder on some than others.  For Ranshaw, it almost killed her.  “I just wasn’t OK with who I was…I was definitely trying to kill myself on the slopes.”  Ranshaw was a pro – but behaving like an amateur.  She was partying hard; closeted on the slopes but openly lesbian at the clubs, and drinking hard.  “When I was out at the bars, it was all loose.  It was awful.” The closet was taking its toll, and it came to an end when Ranshaw had an accident while driving drunk.  She spent the next 2 1/2 years in jail.

Clearly, life wasn’t that hard for Brendan Burke, but it had its moments.  Born into a hockey family, living in Boston with his mother, he played goalie in high school – and liked it.  He was crazy about hockey, and tried out for the Xavieran Brothers High School varsity team – older brother Patrick had played for the same squad – and Brendan made the team.

But Brendan didn’t play hockey his senior year.  He quit because he was too worried his team-mates would find out what he couldn’t hide behind his goalie mask and pads – he was gay.  He just couldn’t spend another year in a locker-room filled with smirking comments about ‘fags’ or ‘cocksuckers.’

“If there was ever a 17-year-old kid who should have felt safe on a hockey team, it was Brendan,” says brother Patrick.  “And yet he still felt uncomfortable enough that he gave it up.”

Soon after, Burke came out to his family, friends, and his team – which was pretty much the same thing as family and friends.  He discovered what Farber, Goldstein and Ranshaw learned – current and former team-mates were, without exception, supportive.  Says Patrick about Brendan: “His team-mates at the University of Miami loved him and universally accepted him.”

Farber’s team-mates were so accepting they made the star player their captain – his proudest moment.  And the locker-room slurs stopped.  “The fact that you say ‘gay’ or ‘fag’, or people use these terms and the don’t think very much of it: they’re not trying to be hurtful or mean,” says Farber:

“It still can really take a psychological toll on your team-mates.  And I think the real thing is that a lot of people say ‘Saying gay or fag, that’s not really that bad, it’s not like using a racial slur.’  But you would never use a racial slur to somebody on your team.  You would never use other hurtful language to someone that you’re playing with – who’s your team mate, your friend.  And so people don’t really take into account that these words really hurt a lot and they can really have a huge effect on someone that you’re playing with.”

Of course, things don’t always work out for the best.  Pro athletes aren’t always welcoming.  The public can be mean.  Brandy offers the example of her friend, Martina Navratilova:

“She’s at the level of world champion – 8, 9, 12 times at Wimbledon – and you know what?  It still wasn’t even all that easy.  The jokes were being made about her, people were talking bad about her.  You talk to her about her experiences – she was at the top of her game but everybody was still talking about her behind her back.”

Farber – then a college athlete – and Goldstein – a pro – both admit they came out to their teams in part because they were having great seasons.  “What were they going to do?” jokes Goldstein.  Coming out can be hard enough.  Coming out as a team athlete…well, there’s a reason Brian Burke called his son a trail-blazer. 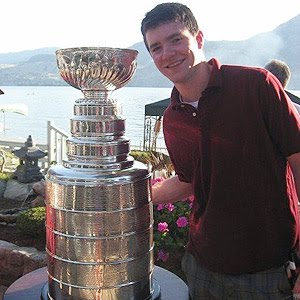 Brian, Patrick, and the rest of the Burke family now wield the axe first picked up by Brendan.  They do it in countless ways.  And they’re making progress.

But until then, until gay and lesbian athletes can both play hard and live out, until it’s not news that a pro is gay, until that kid in the corner doesn’t have to endure the ‘fag’ slurs, Patrick Burke has a job to do.

That was January.  This is May.  Headlines have caught up with Patrick Burke.

“Yes, Joakim Noah Did Yell ‘Fuck You, Faggot‘ at AA Arena Fan” blares the headline in the Miami New Times Tuesday.  Granted: it was a tense game, and a tense moment.  But frankly: hardly an excuse.  “I apologize,” said Noah.  “The fan said something to me that I thought was disrespectful, and I got caught up in the moment, and I said some things that I shouldn’t have said. I was frustrated and I don’t mean no disrespect to anybody. I just got caught up.”

So here we are.  Again.  Another excuse from a pro-baller about the f-word.  You might get disappointed.  But not Patrick Burke. “In the past year alone we’ve had Grant Hill, Jared Dudley, Steve Nash, Charles Barkley, Brendan Ayanbadejo, Donte Stallworth, and Scott Fujita all speak out publicly for gay equality,” Burke tells us:

“I think the continued stereotype that athletes are barbarians who hate gay people does tremendous harm to the cause of equality. We need to give athletes more credit for their openness and tolerance. Is it perfect? No. Are there intolerant athletes out there? Absolutely. But every time in the past 5 years (that I am aware of) when a gay athlete has publicly come out to his teammates, he has been accepted and welcomed. The stereotype that athletes are homophobic scares gay athletes into staying in the closet, and it scares straight athletes into thinking they will be ostracized if they step up as an ally. What the majority of people believe is happening in the sports world is, in fact, not what is actually happening in the sports world. 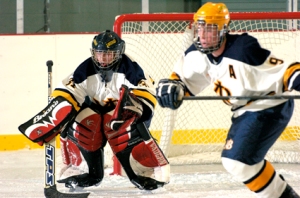 Tomorrow, or the next day or the day after that, the headlines will fade and we’ll turn our attention back to the sport moment of choice.  The NHL.  The NBA.  The PGA.  Baseball.  Soccer.  Tennis.  [Fill In Your Sport Here].

That said…Patrick Burke has a job to do.  “In my brothers own words,” he says:

‘Imagine if I was in the opposite situation, with a family that wouldn’t accept me, working for a sports team where I knew I couldn’t come out because I’d be fired or ostracized.  People in that situation deserve to know that they can feel safe, that sports isn’t all homophobic, and that there are plenty of people in sports who accept people for who they are. ‘”

“I love my job, and being a fairly vocal Ally hasn’t changed it in the least,” Burkie tells us:

“No one treats me differently in the scouting world. My life outside the rink is obviously very different, but life inside the rink remains, thankfully, the same. I think it goes to show what I said above- you can be a vocal ally in the sports world without any sort of consequences.”

Lastly, as out, loud, and proud members of the Caps family, we asked Patrick if he was cool with us not being Flyers fans.  “Maybe you guys just lack the style to pull off ‘orange and black’?” he prods us. He might be right.

If anyone knows hockey, it’s the Burke family.  Things are changing.  Change isn’t easy.  But nothing worthwhile is.

This entry was posted in Heroes and tagged Brendan Burke, can we stop this, H8, Patrick Burke, please?. Bookmark the permalink.

3 Responses to “Why We Do What We Do”