Do the Caps Need a New Captain?

“A captain is a person chosen to represent and lead that team. It is an honor and responsibility which is special and should not be taken lightly. As a captain, you are
following the footsteps of a very select group of people.” – Rosemount Hockey Captain’s Manual.

It can’t be easy to sport the “C”.  Just ask Steve Yzerman – one of the youngest-ever captains of an NHL team and still the longest-serving.  Yzerman played in 1,514 regular-season games, scoring 692 goals and racking up 1,755 points – sixth most in NHL history – and all of them in Detroit.  He was a player’s player.  And perhaps that’s what made him the player’s captain. “He’s been a great Red Wing.  He’s been a humble Red Wing.  He’s been a leader by example,” said Wing great (and Hall of Famer) Ted Lindsay of his former team-mate.

It may be the thing to lay down hate on the Wings…but no doubt that’s got something to do with their talent.  The Red Wings have rarely been bad.  Mostly they’ve lived  somewhere between good and great, and from Gordie Howe to present day they’ve attracted some of the best to ever hit the ice.

So it might be hard to remember that for years the Wings were the too-talented-but-can’t-clinch-the-big-game crew, the team that choked.  The “Dead Wings.” The squad with the explosive style that just couldn’t pull it together when it really counted.  (Sound familiar?)   By 1982, it was obvious to their new owner, pizza-baron Mike Ilitch, that the Wings needed a serious rebuild.

Soon after, in 1983, Steve Yzerman first laced up in the Motor City. There was no doubt the young Canadian had skills – and Yzerman wasn’t the only one.  Coach Scotty Bowman had been brought in by owner and pizza-baron Mike Ilitch to figure out a way to translate those skills into wins.  Part of his solution: make Yzerman team captain.

Three years later, in 1986, Yzerman first donned the C.  It took ten more years before he and his teammates hoisted the Stanley Cup overhead at the Joe.  Then they did it again.  And again.  In Detroit, everyone knew exactly who “The Captain” was.

Take it now back home.  Bruce Boudreau becomes Capitals coach in late 2007.  Alex Ovechkin makes captain in January, 2010.  The third-youngest current NHL captain, and the first born in Europe for the Caps.

What can Hockey Capital learn from Hockeytown?  Let’s see: team loaded with star players, but can’t seal the deal when it counts.  New(ish) owner decides it’s time for a re-build.  New coach brought in to re-jigger play.  New captain named – a young, foreign-born superstar – who has (so far) played all of his NHL games for the same team, and just several years into his tenure.

“If I need to say something, I will say something,” Ovechkin said. “But I will show what I can do on the ice. It’s a big honor for me. I’m going to do my best, but I don’t want to concentrate on having a ‘C’ on my heart. I’m just going to play the same.” 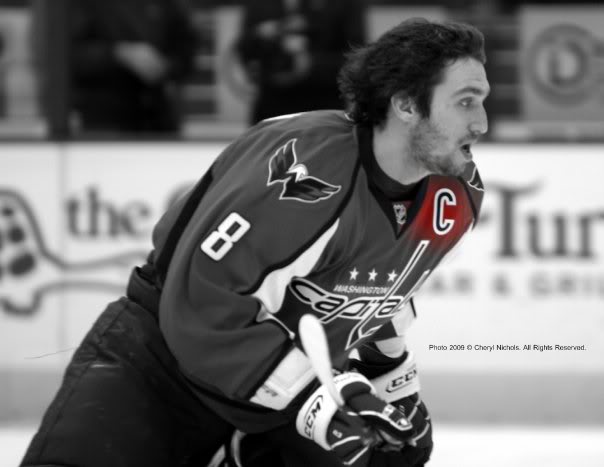 There’s been a lot of discussion lately about what the Capitals need to bring the Cup to DC.  A new coach.  A new player lineup.  A new style of play.  But maybe, just maybe, they need a new captain?

“Ovechkin is a respected player in the locker room and lets his play do the talking,” writes Ben Ashun in the BleacherReport.  “But he hasn’t been able to motivate his team to turn on their best games when it matters most (see last year’s playoff implosion). Ovechkin is still a great player and a good captain, but he has to be able to motivate his team to play better hockey.”

Unlike most other sports, the hockey captain isn’t just a ceremonial post.  Sure, it’s a nod from the front office to someone special, but captains have to perform in order to get the team to perform.  Captains don’t get extra money, extra time or extra anything – except responsibility. Capitals Director of Media Relations Sergey Kocharov makes it clear to us that being captain is NOT any part of Ovechkin’s contract.  Rather, he says, like many (but not all) NHL teams it’s the GM’s decision – and in this case, only after consulting with Coach Boudreau and with some input from the players.

Technically, captains are the only ones permitted to talk with the refs on the ice – hence the rule that captain’s can’t also be goalies (Luongo not withstanding.)  More than just a leader in the locker room, captains are the go betweens of management and players.  If there’s a problem somewhere on the team – on or off the ice – it’s expected the captain will try to do something about it.

Different captains have different styles.  Some are loud while others are lead-by-example types.  Asked to compare the style of the previous Caps captain Chris Clark, Coach Boudreau responded:

“Ovie is taking care of the ice. That’s what Ovie is going to do.”

For Boudreau, and several of his teammates, there was no other choice but Ovechkin.  But that was 2007 – is there really no other choice today?  Alex earned the right to first wear the “C”, but has he earned the right to keep it? There’s no doubting Ovechkin is still a serious draw.  #8 is a large reason the Caps are on their sellout streak.  Just look at the stands – we defy you notto see an Ovechkin sweater.

And he’s still the guy “taking care of the ice.”  As the sharpies over at RMNB recently noted, 2011 clearly wasn’t Ovie’s best year:  “No Hart nomination. No Lindsay, Art Ross, or Richard trophies either — none of the individual accolades we are used to seeing from the game’s most dynamic player,” writes Neil Greenberg.  That said, he remains one of the NHL’s best, the Cap’s central pillar, and is still capable of greatness.

But should he remain captain?  Even before the humiliation by Tampa was complete, Ed Frankovic waded into this swamp when he wrote:

“Alexander Ovechkin is the team captain but he has pretty much admitted he also relies on veterans Mike Knuble, Jason Arnott, and Scott Hannan to help him in the leadership department. How that trio gets a still very young hockey team to settle down and not panic will be crucial to the rest of this series…

“This team has been through a great deal together this season and they must rely on their past ability to get through those tough times and overcome yet another obstacle. That is why the leadership is so important at this stage, because players can’t single handily try to win the game with their skill and talent, it takes everyone on the roster working together and sticking to the game plan in order to get the desired victory. We’ll soon find out if the leadership on this current Capitals roster has what it takes to get things turned around for Washington.”

Once the Caps were swept from playoffs, Kings of Leonsis spoke for many when they advanced this conversation further:

“Boudreau’s captain has not taken accountability for a lackluster effort put forth by the entire team and a lot of the blame should be shouldered by Alex Ovechkin.

“Ovechkin is 25 years old. He’s not a kid anymore and the Capitals have made this his team. Rather than embrace his role as a leader, he has shirked some of the responsibilities he has as captain, leaving the heavy lifting for Brooks Laich, Knuble and even new acquisition Jason Arnott.”

“Ovechkin remains a world-class player with undeniable skills, but it’s becoming evident his role in the room should be a supporting one. He isn’t a player who focuses on the tiny details and that’s fine because his talent overshadows the shortcomings. However, much is expected of a captain, and unfortunately it requires more than Ovechkin appears willing to give.”

A captain can be targeted for a failure of leadership – that’s fair.  But can a team’s failure always be pinned back on the captain?  Clearly not.  Sometimes, the leadership failures extend up the chain beyond the locker room.  Sometimes, you just have a few inconsistent – or worse, lazy – players.  Ahem.

Soon after Ted Leonsis delivered his State of the Caps address, pucksandbooks at On Frozen Blog weaved around this question of just where the problem may lay:

“Alexander Ovechkin, the franchise savior, will turn 26 early next hockey season. Today, he seems far removed from his days as a 65-goal scorer. The league seems to have figured him out. Additionally, his leadership quotient seems notably deficient. Presumed key pieces surrounding him suddenly don’t seem daunting, or untouchable. And they are all under the guidance of a man who’s failed to advance past round two of the NHL postseason, when a host of his younger, less experienced colleagues have.”

But PuckBuddy DaveE looked at the same team, the same disappointments, and came to yet another conclusion:

“I don’t think the Caps have a captain problem, I think it’s in the mix of their personnel — they need a couple of guys age 29-33 who’ve had postseason success. Now, it’s just kids who know nothing else and old rent-a-players who have good nights and bad nights, and who are as likely to be playing elsewhere next year, or not at all, as they are to stay in DC.”

If finding the source of the problem proves elusive, maybe finding the solution is clearer.  Maybe Ovie should remain as captain, but his assistants should step up their game to help bolster the team.  We already know Knuble seemed to take to the role of Team Papa, lighting fires where they needed lighting, listening to players who needed to be heard.  How much help were Chimera and Backstrom?  That’s just unclear.  Would Arnott – assuming he’s even around next year – continue to step up?

In the end, Ovie may not be the very best leader the Caps need off the ice right now, but ripping the “C” off his jersey might prove so disruptive – so disheartening for him and his team – that it’s just not worth the risk.  Part of the burden of wearing the “C” is exactly this sort of scrutiny.  Maybe the guys with the “A’s” is where the answer lies.

Yzerman, keeping his eyes on the prize

In 2006, aging and battling injuries, Steve Yzerman stepped down as captain and as a Wing.  He left big skates to step into – both as a player and captain.

”I don’t do anything specific,” Yzerman told Ed Willes of the New York Times:

”I don’t think, ‘What do I do to lead this team today?’ We just kind of go out and play.” Other members of the Wings see Yzerman’s role a little differently.

”You see how hard Steve plays every night, how much he sacrifices for the team,” said Shanahan, the Wings’ wing. ”You can’t do that as a team unless your captain plays that way.”

Soon after, Scotty Bowman announced that Nicklas Lidstrom would be the Wing’s new “C.”  Lidstrom has played every one of his professional games in Detroit.  He’s lifted the Cup at the Joe, and in 2008, he broke Yzerman’s franchise record for most playoff games.  That Lidstrom is currently the NHL’s best captain would be hard to argue against.  The Wings didn’t win the Cup this year, but they’ve come closer than the Caps every year this past decade.

And Yzerman?  He’s done in Tampa what Washington sorely needs: someone to weld a collection of players into a team.

This entry was posted in Uncategorized, Washington Capitals and tagged Alex Ovechkin, leaders, O Captain My Captain!, Ovie's not going to like us, Red Wings. Bookmark the permalink.