Year of the Ox

Too fast!  Nothing (that we can say publicly) except for the fact that they all share a birthday with today’s Mr. Big Birthday Boy, Alex Ovechkin.

Yes, it was 26 years ago this Saturday that the world first greeted a squalling, gap-toothed, hockey-loving, pound-packing new squab to the fold named Alexander.  Of course, we’re second to no-one in line with big sloppy birthday wishes for our Ovi, hoping his dreams of fast cars, faster women and mama’s home-made buzhenina come to pass.

But it got us to wondering.  Just what, if anything, does his birthdate say about the Great 8?

Yes, if modern newspapers have taught us anything, it’s that our astrological symbols define the entirety of who we are and what we will ever accomplish on this little planet. And so, behold Virgo, in all their whinging glory!

“The Virgo personality is a complex mix of intelligence, common sense, attention to detail, and commitment,” says some blowhard on the Internet, clearly zeroing in on the unique characteristics that define Virgos.  Creative, smart and dyspeptic, Virgos are quiet leaders – efficient, precise, nit-picky, fussy leaders.

Yet it’s not all body-checks and snow-angels for Virgos, as the aurors remind us, noting that Virgos are prone to “illnesses which include catarrh, cold, coughs, pleurisies, pneumonia and nervous instabilities.”  And here we thought catarrh was just a thing of the past.

Ah, but Sept. 17 isn’t just a date when great people – like Doug E. Fresh – were born. Gracious no! It’s also a signing-happy date, with the founding of the City of Boston, our Constitution, the Camp David Accords and – grab yourself – the official signing of the Peace Treaty ending the Russian-Swedish War of 1809 all tracing back to September 17. Whew!  Just imagine – were it not for this day, how deep would the bad blood run between Sasha and Nicky?  Ovi and Matty? Kuznetsov and Mojo?  (Wait…we’d actually like to see a couple of those fights…) 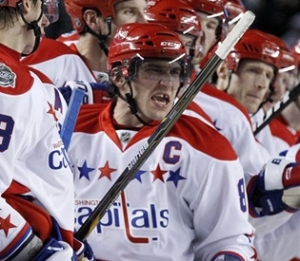 So yeah, there’s that Virgo thing.  But then there’s also that whole other horoscope (the real one) from Asia or somewhere…you know, the one you stare at on your place mat when taking a date to Yen Ching Palace?

Rather than the month, it’s Ovi’s birthyear of 1985 (in the fall) that tells us Ovi is an Ox. Yups. Just let that roll around your tongue a little bit. Ovi Oxy. Oxy Ovi. Ovi, Ovi oxen free.

“Oxes…are dependable, strong, determined, and born leaders.” At least, that’s what the Internets tell us. “They abhor small talk and won’t waste their time flirting.” Yeh-huh.

1985 in particular marks Ovechkin as a ‘Wood Ox‘ – a good year for self-confident leaders. “Wood Oxen are often chosen as leaders or spokespeople. They also have a shorter fuse than other Ox people, and are more likely to be outspoken or to stand up in a crowd to be heard.” Then again, 1985 was also the year that gave us ‘Back to the Future’, the second (and first senile) Reagan administration and Tommy Hilfiger.  Just sayin’.

But even without Ovi’s birthday, September 17 – as opposed to the 16th or 18th, yecch – is a date no doubt circled on your calendar. Who died today?  Glückel of Hameln, that’s who!  And Spiro Agnew AND Red Skelton. What happened today?  The Battle of Thermopylae, that’s all!  And the Peace of Bergerac AND (wait for it) the founding of the National Football League. Who’s feast day is it? Why, the Feast of Adriadne of Phrygia, silly!

Yes, September 17 has brought us many gifts. High on the list, other than the ‘Dougie’, we count our own Ovi. Among the more slavic of birthday traditions is that you should never wish anyone a Happy Birthday until the actual day.

So we’re not going to wish Alexander Ovechkin ‘Happy Birthday’ today. Nope. We’ll wait until the weekend for that…and, with luck, toast him at Russia House after a visit Kettler.

Instead we’ll just note that Sept. 17 is also the birthday of one of Ovi’s biggest fans.  He’s still young(ish), red-headed, and a big admirer of the Caps. Ahem.

And he can do the Dougie, which is saying something.

This entry was posted in Washington Capitals and tagged Happy Birthday, Ovie's not going to like us, today is your birthday. Bookmark the permalink.