As teased, promoted, and promised: PuckBuddys 2.0

We spent a good part of the off-season plotting on how we could take over the hockey world.  But we’re just two guys and can only do just so much.  We soon realized that we needed additional shock troops to join our larger effort.  As we stated in our marketing materials, while we recognize there are 29 other teams in the NHL, we just can’t bring ourselves to write about them (without spitting and cursing up a blue streak of profanity). 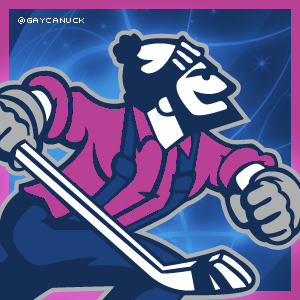 We made a number of gay pals last season and slowly cobbled together a small group of like-minded gay hockey fans. A few have stepped up and answered the call to occasionally write about their teams. Several teams are now accounted for and we’re happy to bring you the first submission from GayCanuck.

He’s gay, he’s a Canuck fan. And he’s gay. What’s not to like? He lives in the shadow of Rogers and tells us he had absolutely nothing to do with the SCF riots (and both the surveillance footage and extensive background checks we conducted confirmed that).  Later this week and next we’ll introduce more members of the squad, your go-to boys for chirky (chirpy + cheeky) hockey coverage.  -Craig

“Okay, I’m gonna be right up front here. I’m a Hockey Noob. I like the idea of a pileup behind my crease, but I had no idea what the hell it meant in hockey. The drafting process? I was kind of hoping it would look like this scene from Mel Brooke’s History of the World. Alas, the NHL Draft was a tad more dignified. Except for the loudmouthed Wilds fans who booed several Canucks picks. I’ll deal with you bitches later.

But ever since my husband and I bought a condo one block away from Rogers Arena four years ago, I’ve grown to love the fast-paced and skillful game of hockey. Hearing the roar of thousands of cheering fans flowing out of the packed arena during home games was contagious. And it doesn’t hurt that my home team is one of the top in the League. Plus, we’ve got TWINS! SWEDISH TWINS!

And then there was that most incredibly awesome USA vs. Canada Olympic hockey game last year, which happened at Rogers Arena. I will never forget the roar that erupted from the stadium and all the buildings around me when my first hockey boyfriend, Sid Crosby, scored the winning goal for Canada. And that was it for me. I was hooked. And in love! (xo Sid) 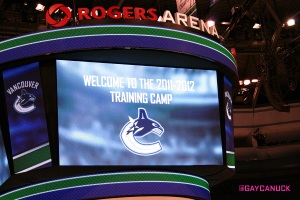 The icing on the cupcake was the incredible run the Canucks had in 2010-11. Unfortunately, it didn’t end well for the Canucks. And then there was that riot. And then the riot jokes.

And then the shocking death of Rick Rypien. And then the tragic KHL plane crash that wiped out an entire team. It was a tough off-season for Canucks fans, and no doubt for the Canucks organization, too. 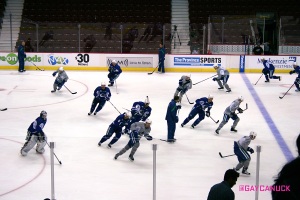 But thanks to a few of my Twitter pals, I now know what a pileup behind the crease means in hockey (it’s almost as good as my version). I’ve also watched and read about the early NHL drafts for the first time this year, and just attended my very first Canucks Training Camp! I loved Camp!! Although there was nothing camp about it, until I arrived.

First of all, who’s idea was it to schedule these campfire sessions at 9 o’clock in the morning? On a Saturday! Ugh. Nevertheless, I woke up, put on my makeup, and said a littler prayer for MayRay. Off I went with iPhone and camera in tow.

The cold, rainy day didn’t seem to discourage many fans from coming out. By 9:30 there were several thousand people in the stands, most in Canucks gear and lots of parents with kids. And it looked to me like 75% of the fans there were female.

Groups of girls sat right next to the rink, brought signs, and screamed like Beliebers whenever their favorite player skated near them. I loved it! The music by Katy Perry and Glee played during breaks was a remarkably perceptive match for this crowd. I knew I was meant to be here at Camp. It just felt so right.

I have to say it was oddly exhilarating to see the Canucks players on the ice. This was the first time I saw them live and up-close. Ever. I didn’t know what to expect but what I got was quite a nice little hockey exposition by Luongo, Bieksa, Edler, Higgins, Burrows and Lapierre. Joining them were prospects from the Young Stars Tournament and new hires like Sturm and Jensen. Head Coach Alain Vigneault was there along with a dozen other coaches, all in spiffy, matching outfits. AV was frequently barking choreography moves at players from across the rink while pucks, sticks, players and ice flew in all directions.

The training drills were a blast to watch! The team demonstrated real speed and strength during play. One of my favorite parts was when all the players started skating around the rink really fast in a big circle in between drills. It brought back childhood memories of a Disney on Ice show. Do you think Dan Hamhuis knows how to do a Hamill Camel? 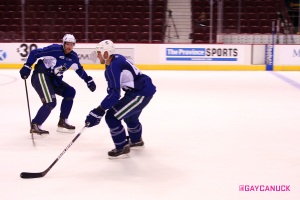 Not having names on their jerseys, just numbers, made it harder for me to tell who was doing what to whom. Although, I was able to identify a few players by listening to whatever name the girls squealed out when their idol skated by.

Next time I’ll make better use of that Canucks iPhone app. Because when I lift up my shirt to show #14 my tits, I want to know whether I’m flashing Alexander Burrows or Andrew Alberts.

I did find it amusing the way Daniel Sedin would bang his stick on the glass wall to make fans notice something another player did and cheer. I’ll have to remember that technique the next time I need vindication. 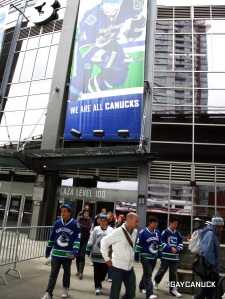 For me the best part about watching all the drills and maneuvers was hearing the sound of the players’ skates on the ice again and the fans cheering for their team.

For this disappointed and heart-broken Canucks fan, going to Camp was a moment of healing and renewal. A new start to a new season. Oh, how I love quick-time harch!”

A sassy gay Canucks fan who, when not swimming in his Fantasy Hockey Pool with Chris Higgins, Tyler Seguin and Gabe Landeskog, is making general mischief on Twitter: @GayCanuck
View all posts by GayCanuck →
This entry was posted in Uncategorized, Vancouver Canucks and tagged Vancouver Canucks. Bookmark the permalink.

4 Responses to GayCanuck Goes To Camp