Coming off a shootout win over the Kings, the Devils travel to Nashville on  Saturday. Brian looks at the good, the bad and the bonus bad news ahead for New Jersey. But he won’t be watching the game; he’s playing that night. Look for that game on Center Ice.

“In the world of Good News/Bad News, I fall into the “Good News First” camp. We’ll get to the bad news soon enough.

GOOD NEWS!  The LA Kings are pegged by most to be one of the elite teams in the NHL this season.  So grabbing two points against them (even in a shootout) is a big boost for this Devils team and Coach Peter DeBoer. Way to go, fellas!

BAD NEWS!  I’m worried that Kovy is becoming consistently inconsistent.  He was double-shifted a lot in this game (playing a staggering 29:47 on the night) and responded with lots of puckhandling (and turnovers, Kovy was credited with 4 of the team’s 5 giveaways in the game).

Let’s just say, if I “stickhandled” as often and as recklessly as Kovy does, and the old wives’ tale was true, I’d be Stevie Wonder blind.  And probably irreparably chafed.  Hopefully we’ll get three points out of him in Nashville.  I could live with that, I guess.

MORE BAD NEWS!  Kovy’s linemate, RW Nick Palmieri is “below average”.  The Devils expect this guy to turn into Cam Neely, but he’s playing more like Cam from Modern Family.  He’s an early front-runner to win The Colin White Memorial “Stone Hands” Award at year’s end.  If he keeps playing like he played tonight, he’ll receive that award in Albany. 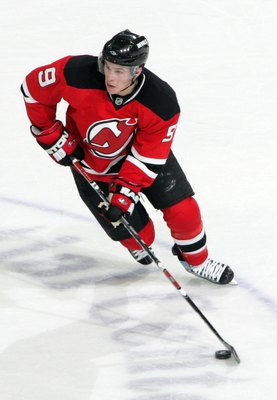 GOOD NEWS!  Petr, Patrik, and Zach keep churning out the Top 40 hits (I’ve taken to abbreviating it “PPZ”, often with a sigh before or after).  My new favorite boy band scored the Devils only goal and tallied 13 of the Devils’ 37 shots, led by Elias’ 7 shots (and the goal).

Zach is looking every bit the player he was two years ago in the early going, and that’s excellent news for Devils’ fans (and Parise’s agent).

Their poor change early in the game was partially responsible for the Kings’ goal, but when you score the equalizer and almost get 2-3 more, all is easily forgiven.

BONUS BAD NEWS!  Marty the All Powerful left the game after the first period with what we’re told is “upper body soreness.” 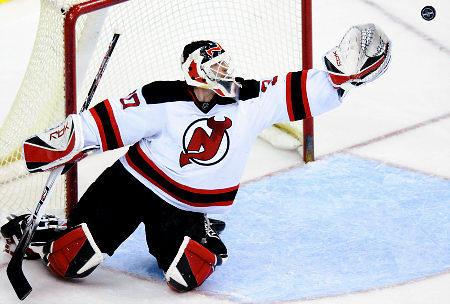 Let’s hope it’s not a flare up of the elbow thing he had last season.

That said, he injured himself making a RIDICULOUS diving save when the Devils weren’t playing well in the middle of the first.

Moose came in and (again) played solid hockey for two periods and made two good stops in the shootout to pick up the win.  Postgame reports indicate that Brodeur’s injury is a “tweaked” shoulder, and that he’s traveling with the team to Nashville and expects he’ll play. If not, I’ll be praying to the Granite God That Is Scott Stevens for his speedy recovery.

Bedeviling: I thought Volchenkov played as solid a game as I’ve seen from him in the red and black.  He was strong in his own end and surprisingly assertive in the offensive zone.   Big Anton probably put more shots to the net tonight than I remember him doing virtually all last season.

Anybody else see that DeBoer played three forwards, with Kovy at the point for the offensive zone draw towards the end of OT?  Elias won the draw and Ilya had a shot at it.  Ballsy move, Pete – I like it!

Though he got beat on the pass that led to the goal (a goal that was more the fault of the bad change and Greene leaving his man to play the puck), Larsson had another very good game, playing a team high (except for Kovy) 24:59.  That lottery was really kind to Lou, no doubt.

One of the reasons Kovy got to play so much is because Cam Janssen (who DeBoer scratched the first two games of the season) took a stupid roughing penalty 15 seconds into his first shift of the season.

Lastly, I’m not one who talks a lot about the other team in these recaps, but the Kings star players (Kopitar, Doughty, Quick) were very good, but if I was a Kings’ fan, man I’d hate Dustin Penner.  That guy is like a Rich Man’s Nick Palmieri.