Ryan and Peter took in Sunday’s Ducks – Blues game, Corey Perry Night, at the Honda Center. Ryan shares a detailed recap of the game, great pics, and a look at Corey’s career as a clutch player, goal scorer and scrapper. Ryan busts Dwayne Roloson’s balls and shares a pic of the Slapshot cast. “Old Time hockey…Eddie Shore, Ryan and Peter!”

Corey Perry and his Heavy Metal

“If you told me before the season that after 3 games in to ’11-’12 season the Ducks top line of Bobby Ryan, Ryan Getzlaf and Corey Perry would have zero points combined, I would say it probably would be a pretty ugly start and an 0-3 record for the team. However- with solid play of Jonas Hiller, a restructured 3rd and 4th line focusing on speed, and commitment to team defense, the Ducks sit at 2-1 after their win on Friday in their home opener.

Heading into Sunday’s game, they may have no points, but “the Big Line” had plenty of shifts where they dominated stretches of the game. With the talent this trio has, the goals were bound to start coming- in bunches.

Sure enough, Sunday night they all collected their first points, Bobby Ryan with two goals, Perry notching his first and Getzlaf with a couple of helpers.

In my post last week on the Ducks and their past success, I primarily wrote about Teemu, as the team was in Finland for their season opener. However, it is the Big Line that makes this team tick. They set the tone for the team and are expected to carry them for periods of time.

Last season this was especially the case and it led to Corey Perry capturing the Hart and Maurice “Rocket” Richard Trophies.

I know that many of you L’ Eastern team boys rarely have the opportunity to watch MVPerry as he’s being referred to out here, but what he did last season was pretty amazing. Ducks fans take pride that he may be one of the most hated players to play against in the NHL.

Perry’s growth over the last 6 season is spectacular. Coming into the league with his “twin” Ryan Getzlaf (drafted along in the 2003 entry draft) in the 05-06 season, they provided an invaluable 2nd line behind Teemu Selanne and Andy MacDonald as the Ducks made a surprise run to the Western Conference Finals before being knocked off by the other Cinderella team that post-season, the Edmonton Oilers and cheater/flopper/goalie Dwayne Roloson.

I’ve never seen a goalie fall onto his back when another man gets near him like Rollie did that playoff year!  In fact he flops on his back faster then any gay man I know.

In his sophomore season, Perry fed off his experience from his rookie year and posted 17 goals and 44 points before he exploded in the post-season for 15 points in the Ducks Cup run.

Drinking from the Cup so early in his career could have led to him resting on his laurels but the 22 year old was just coming into his own. Perry continued to develop his agitating style, playing hard, edgy and getting under opposing teams skin. He always drives hard to the net, often bumping the goalie in the process. He has now posted 4 straight seasons with over 100 PIMs, but he does his best work with his hands in close.

It’s amazing watching him stick handle in those tight places. [Insert many gay jokes here].  His creativity is masterful, making top pairing defensemen look like the should be back in the AHL. As he’s shown, he isn’t afraid to mix it up with opposing players, as evidenced by his tussle with Brandon Dubinsky in last Saturday’s game. 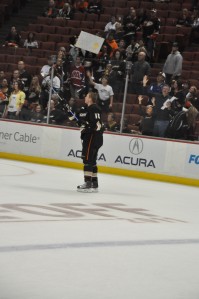 When Ryan Getzlaf took a puck to the face on December 28th last season and wound up missing 14 games as the Ducks tried to get themselves back in the tight Western Conference playoff picture, it was Corey Perry who took the team upon his back and carried them with 8 goals and 6 assists as the Ducks posted a 10-4 record.

But more impressive with the season on the line in the stretch, Perry notched 4 GWGs from March 19th on to have the Ducks catapult into 4th in the West. He finished with 11 on the year, including his hat trick against our bitter rivals the San Jose as the season wound down.

If you think that’s clutch, it’s only the beginning. 25 of his 50 goals last season either tied the score or put them ahead.  When most opponents were trying to clamp down their defense, he scored 21 goals in the 3rd period. The guy is a beast.  When the Ducks game is on the line, you want the puck on his stick.  He is near the top of the league if you were to poll defensemen on players they least want to play against, because he’s so strong and so talented and such a pain in the ass.

Sunday, we celebrated his Hart trophy (the first in team history) and his Maurice Richard Trophy (Teemu is the only other Duck to win goal scoring crown) as well.  I celebrated by attending the game with my partner Peter @ptbents34 and a friend who happened to be a Blues fan. He’s straight but has a huge man crush on Bergland, who had a nice tip in goal. Luckily we’re cordial; the Ducks won 4-2.

We had the pleasure of seeing the trophy up close and personal in between periods. I can’t tell you how ecstatic and how amazingly deserving of this award Perry is. The talk out West is that this will only fire up his buddy Ryan Getzlaf to get one of his own.

The fact that Bobby Ryan is considered the 3rd best player on the line, when on many teams he would be the best offensive player only speaks to how good the trio is.

It’s scary how good this team is when they get going.  If the secondary scoring continues like it has early on the Ducks might be positioning themselves as a team that can make some noise.

Bobby Ryan got the Ducks on the board when he buried a rebound off Halak’s pads from the face-off circle 2:20 in on the power play. The powerplay was set up by who else, Corey Perry,  forcing a penalty to be taken by the defensive after he accepted a nice pass in the slot and created a scoring chance.  Bobby Ryan added his 2nd of the night late in the 3rd. 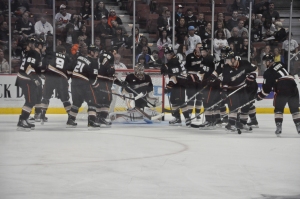 After a give-away by Francios Beauchemin led to Patrick Bergland’s redirection goal that tied it  in the 2nd , the teams skated even the rest of the frame. Both goalies made some great saves to keep the game knotted up.

Beauchemin redeemed himself with a blast from the point to regain the lead- as time had expired on the powerplay to begin the 3rd. Beauchemin’s goal was his 25th in a Ducks sweater.

Only fitting, Corey Perry scored a power play goal on Corey Perry night. It was set up by a nice pass from Getz down low to Teemu- who fed Perry at the top of the crease. The goal put the Ducks up 3-1.

Fittingly when Alex Steen made the score later in the 3rd, it would make this goal stand up for the game winner.  How many game winners will he wind up with this year?!

The Ducks traveled to San Jose on Monday night. [Ed. Note: way past our L’ Eastern bed time]. The Ducks will try and take advantage of San Jose’s poor start and injuries. Goaltender Antti Niemi , back-up goalie Antero Niittimaki and  their top off-season scoring acquisition Matin Havlat have all missed the first 3 games.  Whenever these two teams get together it is often high intensity and lots of fisticuffs.