HNIDC: It’s Hockey Night in DC, as Jeff’s Wings square off against the Caps at Verizon tonight. Truth is, the DC Bureau is a house that’s somewhat divided – one of us hails from Hockeytown, and we have dear friends who worship the Wings and run a whip-smart site devoted to them. Either way, we’ll rock the RED tonight.

“The Detroit Red Wings continue to dominate their opponents so far this season. Five games under their belt, and five wins. The Red Wings fortunes were looking great after last Saturday’s 3-2 OT win against the Minnesota Wild.

One of the Tweets the Detroit Red Wings (@DetroitRedWings) made after that win was this nugget of information: “First 4-0 start for Detroit since the 97-98 season!”

The big unknown over the last week was how the Red Wings would fare after six days off. Granted they were coming back against the Columbus Blue Jackets, a team that has yet to win this season. Clearly there was nothing to worry about as Detroit got two on the board in the first period and Columbus could never catch up. The game ended with a 5-2 win. Saturday night is the night to watch.

Saturday night, for one team, this season’s perfection ends. Detroit travels to Washington and the 5-0 Red Wings will battle it out with the 6-0 Washington Capitals. It’s going to be a knock-down, drag-out fight to the bitter end at the Verizon Center since neither team is going to want to lose their perfect record. 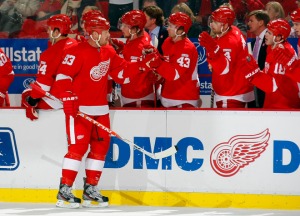 Franzen after his goal against Columbus

“The Wings have a lot of power going for them. Johan Franzen (4 goals/3 assists) and Valtteri Filppula (2 goals / 5 assists) each have 7 points. Jeri Hudler and Pavel Datsyuk have 2 goals / 2 assists each. The goaltending has been solid too with Jimmy Howard having a 1.72 goals against average while Ty Conklin racked up a shut out in his one outing in net so far. Franzen and Fippula were great on Friday helping each other. Franzen got his 2 goals with Fippula assists; then Franzen set up Fippula for a goal.

Another reason to win Saturday night: Captain defenseman, and star, Nicklas Lidstrom, plays his 1,500 NHL game. He’s the 14th player to reach that mark and it’s as good a reason as any to get the win!

I’m thrilled the regular season has opened so strong since the Red Wings had me worried in their pre-season games. Across those eight games they were 4-8, which included one OT loss, one shootout loss and one shootout win. Granted, the games were close—six of them had only a one-point differential—and they were up against four solid teams with Pittsburgh, Philadelphia, Chicago, Toronto. There’s some solace, if you’re looking for a silver lining of some kind, in these stats since the Red Wings won one and lost one against each of these competitors.

The thing that troubled me in the pre-season is a tendency to have a lead and then lose it. It happened against the Flyers. Here the Wings were up by two then the Flyers got on the board and it was back and forth from there. Ultimately the Flyers managed to tie it with seconds to go. It took a shootout for Detroit to claim the victory.

The second meeting with the Flyers, they had the lead for a moment after a first period goal and then the Flyers took the rest of the game 3-1. A similar patterned happened against Chicago, which ended up in another Detroit-won shootout. The second meeting saw Detroit get a 3-1 lead on the Blackhawks only to lose the game 4-3.

The most difficult lead erosion to watch was the season opener against Ottawa. Here the Red Wings were soaring, leading 5-0 at the 3:12 mark in the 3rd. Ottawa kicked into gear and over the course of about 13 minutes put up three goals, and two of those were on power plays. Thankfully this game still ended in a win for the boys in red.

As strong as the Detroit roster is, they need to dominate games more consistently. When they have a lead they need to fight hard to keep. Don’t let the other team build up momentum. Believe me, I know this is often easier said than done.

When your opponent is losing, they’re going to look to get back in the game and you have to meet or exceed that intensity. How the Red Wings blend their skill and intensity is going to determine how the season goes. When they are on, they are unstoppable. When they’re off, it can be painful to watch (and I’m sure equally painful for them to play through). Luckily, so far, the regular season has featured the unstoppable Detroit more often than not.

It’s the unstoppable Detroit I want to see on the ice against the Caps. As much as I dislike the Caps, you can’t deny they’ve opened big this season. It’s only the Caps and Red Wings that have perfect records right now. As if on cue, leading into this game, Ovechkin seems to have rediscovered his goal scoring abilities this week.

In a non-game related note, I love the Red Wings opening video they’re playing at the Joe. A good opening video can give you goosebumps and this one does, especially the shot through the Joe’s rafters right at the end of the video. You can check it out here.

Outside the Red Wings, a few other notes on the season so far:

• I don’t have NHL Center Ice. I can’t justify that expense to my husband since I’m the only one who watches hockey in the household. I have to say the Versus schedule so far this season has not been my friend in terms of the teams they’ve been showing… or for that matter even the volume of hockey they’ve been showing. I’m hoping this gets better soon!

• I like NHL.com’s Game Center Live for keeping up with games I can’t see. The real-time interface does a great job of reporting the game so I have a good sense of what’s going on.

• I’m also getting used to the NHL Game Center Andriod app. It looks like it’s going to be a good way to keep tabs on things for multiple teams. The other app that has my attention is the new NHL Twitter Visualizer. I haven’t played with this much yet, but from what I’ve seen so far this could be a fun accessory to have open during games.

• Speaking of Twitter, my thanks to the Detroit Red Wings team that manages their Twitter feed. They do a great job of keeping the out-of-market fans up to date, especially during the games.

• I have to give a shout out to my other favorite team, the Pittsburgh Penguins. They are 5-2-2 in the regular season. Yes, they are second place in the division but it’s disappointing that they lost in OT to the Caps [Ed. Note: disappointing to who?] and gave the Jets their first win. Adam gives a lot of insight into the Penguins season so far in his piece from Thursday, so you can read that for all the down and dirty details.

• A quick nod to my alma mater’s hockey team, University of Alabama’s “Frozen Tide.” They had a rough weekend playing in the Seth Shupan Memorial Tournament in Michigan last week (four losses in four days, although Michigan State did have to come from behind to beat them). Back on their home turf in the SEC, however, they are 3-1 for the season so far. That includes too huge wins against Mississippi State – 11-1 and 11-0. Roll tide!”

5 Responses to Wings Over DC