Fear and Loathing in Ottawa

Not since Kerouac, or maybe Hunter Thompson, has a road trip been so colorfully documented. Andrew headed to Ottawa last week to take in Blue Jackets game. He still hasn’t surfaced, but his manuscript and snapshots have (smuggled out of prison or an opium den, we think).  Although a week after the fact, we’re happy to finally publish his savage journey into the heart of the Canadian-American dream (and snacks). 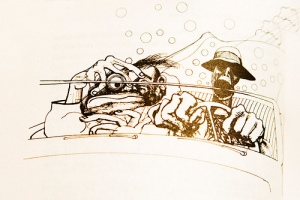 “So I entered into enemy territory this past weekend to take in my first NHL hockey game in about 3 years. Yes, I have gone through QUITE a drought. The fact I got so excited to A) Be at a Senators games and B) Have it be a Senators game against Columbus should clearly indicate how desperate I was for some ice time. Well, it was well worth it.

It all started with a magical train ride from Toronto to Ottawa. It was relatively uneventful, save for two big things:

1) I sat beside a creepy dude who looked like if a young Ted Kennedy was a serial killer who ate skin. I was honestly afraid to fall asleep, thinking I could wake up without a face.
2) THEY HAVE WINE IN JUICE BOXES. YES. IT COST SIX DOLLARS BUT IT WAS IN A JUICE BOX. !!!!

I arrived at my friend’s apartment and, again, it was relatively uneventful. Save for the arrival of FIREMEN. Yes, we were on the 14th floor, but still. There was camera-zoom ogling, especially after she told me about the Ottawa Firemen’s Calendar. Sleep was had.

Game Day started off as any good Game Day does: with a Buffy marathon. Eventually, after a bit cajoling, we started the over an hour long sojourn to Scotiabank Place. Because it’s not in Ottawa, it’s actually in a suburb. In the middle of nowhere. Well, save for the geese (or bats). And field grasses. Lots and lots of field grasses. 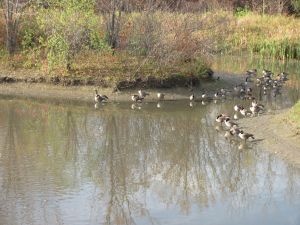 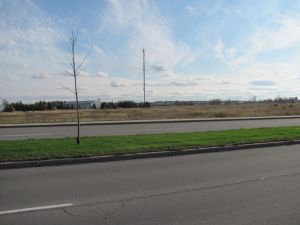 The arena itself isn’t really anything special, to be perfectly frank. Granite, cement, glass circle. Meh. From a distance you can tell it was game day…the parking lot was empty. But they have a decent interlock inlay at the entrance. 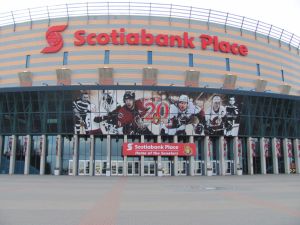 Decided to eat at a restaurant/bar inside the arena called Bert’s. Nice looking place, lots of TV screens with sports, and the natural fuckton of Sens gear. Best part? An amazing banana daiquiri. Made with real bananas. Those things could get me into a lot of trouble. It was $7, but it was worth it. Had a starter of HUGE onion rings. I swear they could be used as spare tires. No freaking lie. Big as your face. And by god they were hotter than the hinges of hell. But had nice chipotle mayo. 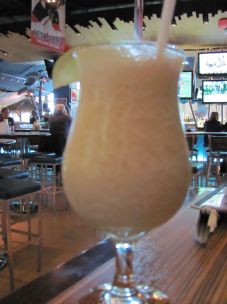 Main was a club sandwich with Caesar salad. The menu advertised Canadian bacon, but it was clearly regular bacon. And the cheese wasn’t melted. And the lettuce in the salad was still wet. So yeah, not a big success. And for $15, you’d expect it to be a bit better than that. All in, though, it was decent service and decent food.

It was nice to have an entrance into the main arena directly from the restaurant, so there was no line. Took the typical stroll around, went into the Sens store and felt dirty… you know. The uszh. Then we went to our seats. Eight rows from the ice. EIGHT. I have never been that close to the ice. Ever. So needless to say, I may have lost my shit a tad (especially thinking ahead to December, where I’ll have the EXACT seats for the Canucks). 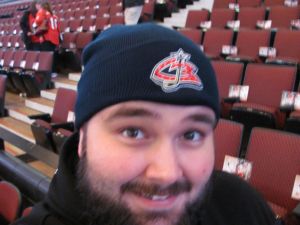 I was quick to don my newly acquired Columbus Blue Jackets hat. (PIC 11) There were only two things I could find that were CBJ in Ottawa, this hat and a pennant. I opted for the hat, even if it slowly cut off my circulation because of my giant melon cranium. I mean it, no hats fit me. A size 8 is too small. Getting a toque that fits? Yeah, no. In grade 9 Family Studies (Home Ec.) I actually sewed my own toque. Yes. I admit that. And for a hat that’s “American Tradition” I find it funny that it’s made in China…

Not going to lie, I was worrying that I’d be the only Blue Jacket adorned person there, until a gaggle of men in Rick Nash jerseys appeared across the ice. Oh, calloo callay!

Yes, I was still in the minority, but not alone.

Now at this point, I must own up to something. It kind of became the Rick Nash show. I barely looked at the Senators once the warm-up started. I think I took something like 156 pictures, 140 of which were of Rick Nash. Yeah. I have a problem. A sexy problem. You’ll see a selection of pictures below. HOT DAMN. Like, really, it’s not even fair.

But I’ll make one special mention. Number 14 for the BJs. Yes. I know. Childish. Sue me.

One of the more confusing parts of the game was not that the Senators could actually score, but this quartet of older men. One of which was wearing a Habs jersey…and a Bruins hat. I just couldn’t wrap my head around it. At all. It’s just not meant to be. Polar opposites. Good v. Evil, Yin Yang, Being and Nothingness. All that.

One moment of pride was when I openly booed Daniel Alfredsson. In his home building. Oh, you better believe I got looks. Some 10 year old kid even turned around, asked us if we were really Columbus fans and then shook his head. This is the kind of youthful disdain that sustains me.

And it was a close game. Jackets were leading 3-2 up to the last minute of the third. Then the Sens tied it. Then Chris Neil got a misconduct (surprise! Goon.). Then with 4 seconds left, Michalek scored…handing Columbus another loss. You couldn’t help but feel awful for them. Like actually. I really just feel bad for Nash. And by feel bad…

So yeah, it was a decent experience. Get to do it again in December. Still on a bit of a hockey high, cannot lie.  Oh, and I discovered Twerk. This knowledge will be -”

And that was it; the manuscript ended mid-sentence, at the point we believe, the RCMP pried the crayon from Andrew’s hand.

It may do no good until Andrew is bailed out (or his remains discovered), but follow him on twitter anyways: @manbearpiglpu

This entry was posted in Toronto Maple Leafs and tagged Bad craziness, Columbus Blue Jackets, God bless Ralph Steadman, Ottawa Senators, Rick Nash, Snackies and Nomz!, There is nothing more helpless and irresponsible than a man in the depths of an ether binge, When the going gets weird - the weird turn pro, Youthful disdain that sustains me. Bookmark the permalink.

4 Responses to Fear and Loathing in Ottawa