A Movember To Remember

From Peter, AKA Petr, because he always had a European flair, a special post about a very cool cancer awareness and fundraising project, Movember.  Petr is normally all about the Bruins, so it’s no wonder he’s looking or a change of pace this week.  Yeah.

The Ducks are in DC for a Tuesday night game against the Caps, and they got their faces shaved Monday evening, to kick off their Movember efforts. They’ll get their wings clipped on Tuesday night at Verizon (Sorry Ryan!) by the Boys in Red, who are also raising funds for Movember.  Closer to their home, our pals at Anaheim Calling are running their own contest, with a donation and an autographed picture of Bobby Ryan up for grabs.

“Ok dear readers, you may think that I have been hiding away in a dark cave as the Bruins have started the season 3-7, but I assure you that that is not the case.

While much of the Bruins team seems to have been hibernating (David Krejci! Wake up! The season started! Same to you Horton! And did I hear that Benoit Pouliot is on this team? I haven’t seen him yet!), I have actually been MIA due to some “real life” stuff, but I am here now with “A Very Special Episode of PuckBuddys.”

So all you Leafs fans, here’s an article for you to comment on and gloat about your impending President’s Trophy season and inevitable Cup run. Yes, yes, Phil Kessel is a shoe-in for the Hart, Richard, Lady Byng, NBA Finals MVP and Mr. Universe!

However, as October has drawn to a close, it’s time to remember that there is a long way to go in this wonderful ride we call the NHL regular season.

Which brings us to the topic of November. We’ve got nearly a full month of hockey under our belts and November is the month where things start to take shape. The pretenders fall back and we begin to see who is for real.

Is Kessel really going to be a 50+ goal scorer or is this just another fast start for him? Are the Oilers for real or will the rigors of the NHL season catch up with their Bieber-aged lineup? Are the Bruins really this bad or will they shake off their “Cup Hangover” and defend Lord Stanley for real? 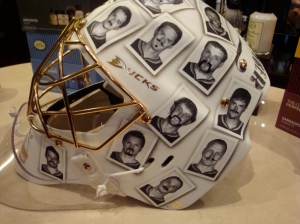 November also carries a newer tradition in the hockey world, Movember. Players, coaches and fans are joining this movement, which promotes men’s health and raises money for various cancer charities, in growing numbers. (Pun intended…I love puns, so deal with it.) Last year, Bruins Shawn Thornton, Patrice Bergeron, Nathan Horton, Milan Lucic, Tim Thomas and Mark Stuart (now a Jet) were among those who participated. As 1 in 2 men will get some type of cancer in their lifetime, this is something that affects pretty much all of us.

While the Bruins have a long tradition of moustaches, from Ray Bourques 1980s era mo’ to Dave Lewis’ middle manager ‘stache (Sorry Bruins fans, I will never mention the worst coach in Bruins history again), to the current beauty occupying the upper lip of Tim Thomas (one of the few Bruins actually performing this season), Movember gives everyone a little extra reason to rock that lip hair you’ve always dreamed of. There are those (Tuukka Rask and Tyler Seguin, for example) who may lack the ability to grow a workable moustache, but Movember is for everyone.

If you can’t grow a ‘stache due to lack of lip hair, job requirements or merely a fear of scaring off potential bedmates, you can still give money, spread the word or merely cheer on those who submit themselves to a month of mockery and fun.

So, I encourage everyone to direct your browser over to Movember, where you can find your country’s site and do what you can to help.  If I get truly brave, I’ll post a picture of my moustache, which I am sure will put that of George Parros to shame…or at least that of George Costanza.

In the meantime, go to your doctor, get yourself checked out and learn all you can about prevention and living a healthy life. Most of us of the male species are way too willing to ignore or own health out of fear, ignorance or just plain laziness. Don’t wait until it’s too late.

It doesn’t make you tough if you don’t take care of yourself, it makes you stupid. Don’t make me have Shawn Thornton and George Parros [Ed. Note: Or John Erskine, he of wicked ‘stache!] come talk to you, ignoring your health makes them angry and you wouldn’t like them when they’re angry.”

For more pics of the Ducks getting shaved, click here.