We are the 1% of hockey fans. We will #OccupyNHL if we keep growing. We’re thrilled to have two new faces join the lineup, Scott and Mike, our Canes team. They share great stories about the hometown team and going to the games as besties. Their timing is good; on Friday, our Caps face their Canes for the second time this season, and we know what that means: Jeff Bieber and at least three Staal brothers.  Good luck Friday night gentlemen, and welcome aboard.

Scott: I love musicals.  Seeing Donny Osmond in Joseph and his (gay) Dreamcoat was a highlight of my time growing up in Chicago.  I was born 15.8 miles for the old Chicago Stadium and never knew they played hockey there until later in life.  One of my first celebrity crushes was on Paul Molitor of the Brewers, only 93.7 miles north of Chicago.  You may think that before moving south in 1995, I would have been exposed to the Chicago Blackhawks, or even the game of hockey.  But the early 90’s only had time for one super star in Chicago and that was Michael Jordan.  The Blackhawks winning 11 consecutive playoff games in 1992 probably made it to the second page of the paper.

It wouldn’t be until October of 1998 that I saw my first NHL game.  795 miles from Chicago I sat in a luxury box at the Greensboro Coliseum, watching the Carolina Hurricanes and the Chicago Blackhawks, rooting for the Hawks.  I wasn’t instantly captivated by the game.  Or the team.  I guess everyone’s first time isn’t the best…right?  With a state focused on their rich tradition of college basketball, uprooting an NHL team from Hartford seemed like nothing more than a joke.

But is there not always a rainbow after the storm?  In 2000 I came out of the closet and In 2002 the Canes came out as well as they made it to the Stanley Cup Finals, introducing the world to the Hurricanes and as many Detroit papers editorialized, “Mayberry.”  Although the Canes didn’t raise Lord Stanley’s Cup, they did make me a fan for life.  In 2003 the Canes drafted my future husband (don’t tell his wife) Eric Staal, and a few years later winning the Cup in 2006.  Without a doubt, Justin Williams’ empty net goal in Game 7 of the Finals is my favorite goal ever.

I can’t wait for Jeff Skinner to do the same in 2012.  The 2011 All Star Game in Raleigh was one of the best weekends of my adult life.  Of course I pulled for Team Staal!

It’s the simple things in my life that keep me going.  As a high school math teacher, things can get a little calculated.  So getting to go to the RBC Center a few nights a week, not knowing who will be the next hero, hoping to hear Rick Flair “wooo hooo” after a Skinner goal or “Ruuuuuuuuuuning” after T. Ruutu scores a hat trick and turning to the “deer-in-headlights-Southerner-who-has-never-seen-ice-before” and say…”we’re ruuuuing, not booing” is what I look forward to the most.  I love that in the heart of Carolina I get to see Crosby, Ovenchicken (sorry, Ovechkin), J. Toews (yummy), M. St. Louis, T. Thomas,  M. Brodeur, and even Gretzky a few years back coaching on the bench. 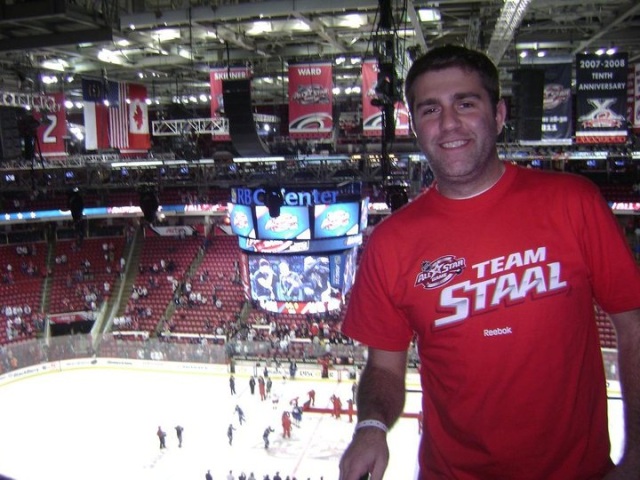 To Sports Illustrated and the rest of the hockey world who mock(ed) Carolina for having a hockey team…the Canes are here to stay.  And this gay guy will be there for all the wins and all the loses, sitting in section 304 with my gay best friend Mike, yelling, “Let’s Go Canes!”

Mike: I love sports. All of them. The gay kid isn’t supposed to like sports, right? But there’s something about watching history being made that gets me excited. I look forward to the day when I can tell my nieces and nephew, and hopefully my own kids, all the amazing sports moments I’ve witnessed. From Duke winning back to back championships, to the Braves winning the Series in ’95, and Tiger at the Master’s in ’97.

But nothing so far can top the 2006 Stanley Cup. As a fan, I feel it falls upon my shoulders to will my team to overcome the odds and make magic happen. That’s what the Caniac Nation did on that night in June, and we all shared in the glory of raising the Cup.

I grew up knowing very little about hockey, but instead marveled at Michael Jordan and Troy Aikman as I watched as them build their dynasties. I knew who Wayne Gretzky was and watched him scored his iconic 802nd, but it wasn’t until later that year that I starting paying attention to the sport. “The Curse” made me a hockey fan. Mark Messier guaranteeing a win made me pay attention. I loved watching the Rangers play in that 1994 Stanley Cup final; I was witnessing history. I became enamored with a game I assumed would never be relevant in North Carolina.

That all changed a few years later when the Whalers moved south. I attended my first NHL game in 1997 because I wanted to see Gretzky play. I don’t remember who won and I don’t remember anything about the ‘Canes that night, I just knew that I saw “The Great One” score a goal. I knew I had another story to tell and I knew my passion for hockey was born. It took a few years for my love of the game to grow as my interests were still elsewhere. I was still in a state dominated by college basketball, and my Duke Blue Devils were leading the pack as always.

Something weird happened in 2002 though.

We fell short that year but that’s when I started referring the Canes as “we” instead of them. I was hooked. I was in it for life.

June 19, 2006. That’s the story that I can’t wait to tell the most. It was the most fun day of my life. I cried about hockey, I cried for a championship, I cried because I was proud.

I cried because WE won a Stanley Cup. The years since have only provided for more hockey history and more stories as we made a run to the ’09 ECF and hosted the All-Star game in 2011.

Drafting the cutest, most talented hockey player I’ve ever seen (can we say Jeff Skinner) didn’t hurt either.

Not all of the Canes’ stories are good, but I can’t wait to watch them all unfold from section 304 in the RBC Center, sitting next to my best friend Scott.

You have to follow the Canes Dream Team on twitter because Jeff Skinner says so. Scott is @imsmax and Mike is @SiesFire.

Proudly serving gay hockey fans and players since 2010
View all posts by Craig →
This entry was posted in Carolina Hurricanes. Bookmark the permalink.