Vinny, our man on the Isles beat, unloads. He reloads, and unloads again. His target? Isles owner, Charles Wang. Keep your friends close, Vinny, and your enemies closer. 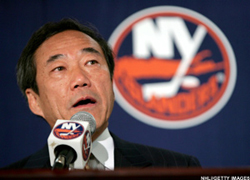 “Charles Wang came to us in the new millennium, a harbinger of a better tomorrow. That better tomorrow, though we’ve seen glimpses over a decade, has yet to arrive. Hope is the most powerful of all emotions. Without it, we are adrift. That is where Charles Wang has left us, adrift in the tumultuous seas, bereft of hope. It didn’t have to be this way. Alas, it is. 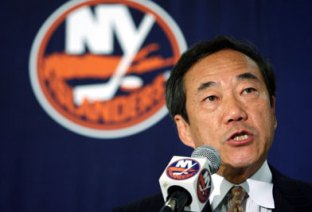 Charles Wang and Sanjay Kumar took over at the urging of former NY US Senator and long time Kingmaker, Alfonse D’Amato. They road in on the backs of the ne’er do wells, cheapskates, liars and criminals who had profiteered from this team’s legacy since Roy Boe left. The Computer Associates Co-Chairs would flaunt their hockey ignorance, vowing to stay away from Hockey Ops and let their hockey staff make the decisions.

Unfortunately, the person they trusted was Mike Milbury. 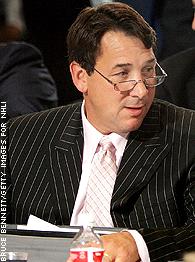 Milbury knew he was on borrowed time given his track record of SUCKING under previous owners of ill refute. Milbury acted quickly, shuffling off Luongo and in DiPietro.

That year sucked, but when Mike swung for the fences and we finished 1 point off a division title in 02 thanks to Yashin, Peca, Osgood and the criminally underrated Adrian Aucoin, the long lost spirit of Islander country soared. We haven’t seen it since. Since Milbury canned the coach who orchestrated the turn around (Peter Laviolette), we have steadily regressed. Laviolette, Stirling, Shaw, Nolan, Gordon, and Capuano.

That’s THIS DECADE of Islander head coaches. After our initial growing pains, we had one coach from 1974 to 1994. [Note: Terry Simpson took over while Arbour was briefly retired]. Now it’s a yearly carousel, and it’s disgusting. The coaching position has become the position to offer sacrifice to a pissed off fanbase while nothing actually changes.

Meanwhile, the GM chair, has seen other than a one month laugh riot with Neil Smith as a figurehead for Wang’s “committee”, exactly one change: Milbury out. Snow in. Yes, we fired a Stanley Cup winning GM 30 days into his tenure to hire our backup goalie. This is the exact sort of shit that has become commonplace on Wang’s Island. 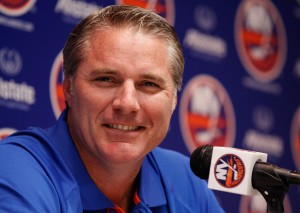 Nonetheless, Snow pulled one out of his ass, sending three bags of dirt to Edmonton and landing Ryan Smyth to set up the improbable 2007 Playoff run, punctuated by 4 wins in 6 days including the season ending shootout winner with a Dubie poke check as an exclamation point. But that was the high point of his tenure. To be fair to Snow, he’s under orders to keep the payroll a pubic hair above the salary cap floor. He’s done a good job of stockpiling assets and turning our system from a Milbury authored dearth of talent to a legitimate top 5 farm system in the NHL. That’s a good thing. 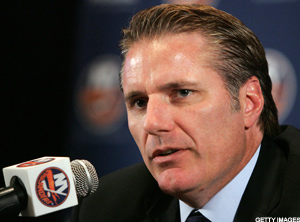 The fact he is unwilling to dip into that cultivated pool of talent and add veteran pieces to his promising young NHL core is infuriating. Snow has proven a shrewd drafter, yes, but that was under the assistance of Ryan Jankowski, who was banished for daring to have GM dreams of his own. By himself, Snow seems to be able to assess his teams needs and address them in the talent pool via draft and shrewd waiver wire plays. As far as adding legitimate top line NHL talent via free agency, he has whiffed. 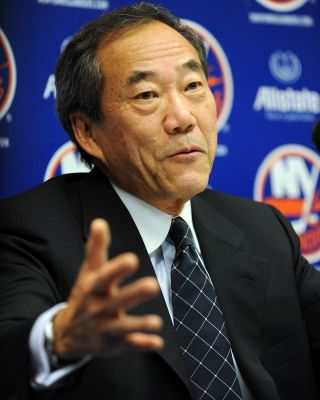 They’ve publicly courted the big names, and failed. Then they’ve parlayed that into the sympathy card of ‘no one will play here because of the arena’. That’s widely known to be bullshit. I’ll tell you the dirty little secret of their free agent ‘strategy’: Back loaded contracts. No elite NHL player wants a BACKLOADED contract.

This is Wang’s end game. Appease the fans with offers that have no freaking chance of being taken and then offer veterans on the way to retirement incentive laden contracts that they will never achieve.

Thus, you have “courted” the big names and failed. That engenders loyalty from your fanbase and a ‘us against the world’ mentality while banging the NEW ARENA drum. Then, while you give out these incentive laden 35+ contracts and Entry Level contracts to amass a nice few million over the floor with bonuses, in reality you are icing a team TEN MILLION DOLLARS under the cap floor.

So, Charles Wang, SAVIOR OF THE NEW YORK ISLANDERS, has brought us this, in over a decade: 4 playoff appearances. A TOTAL of 6 PLAYOFF WINS. 4 failed Arena proposals, and the absolute bastardization of our hallowed logo and name. 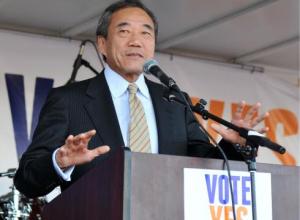 People talk about the dark ages before Wang without understanding the reality of the situation. Prior to Wang, our playoff drought was 6 years. It will be 5 after this season. We are where we were before, with another dozen years wasted. I will concede, the homegrown talent here is palpable. There would be many reasons for optimism, would this motherfucker one day wake up and invest a goddamn dime in the team. There have been plenty of chances to give Tavares, Grabner, Okposo, Hamonic, McDonald et al the support they need to get to the second season. They haven’t even tried. 38 year old Steve Staios is a bandaid on a bullet wound. Ditto for Brian Rolston. It’s patently absurd. It’s beyond revolting.

And when the owner gets on his soapbox and spits out the same old lies “our only goal is to keep the Islanders here and bring the Cup back Home”, “We spend roughly in the middle of the road in terms of salary”, “there are no financial estrictions”, the fanbase gives up hope. 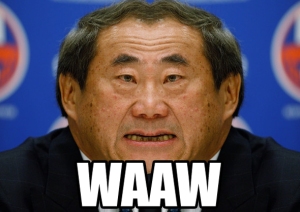 We are being lied to, and we know it Charles. Why? Because we’ve been through it before. We expected better of you. You were to be the savior. The chosen one.

Instead, you’ve been another blight upon our proud tradition, who not only stymies our present, but threatens our very future at all.

Today, you continue to play a game with Nino Niedereitter, 5th over all last year. You sit him, not for performance, but because he can’t be allowed to reach his bonuses. But you can’t send him down because you need his salary to reach the floor. We see it, Charles. It’s transparent. It’s disgusting. It wounds us. The kid has no idea what he did wrong, and you stymie his development to save cash. 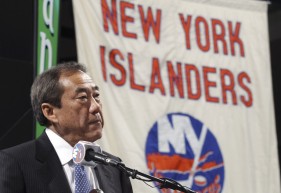 You went from being the one to save the franchise, to among a history of mad men, tyrants, thieves and frauds, King of All Islander Scumbags.

And for that, I offer you a sincere F U.”

Proudly serving gay hockey fans and players since 2010
View all posts by Craig →
This entry was posted in NY Islanders and tagged Charles Wang, Target practice. Bookmark the permalink.