For several months we’ve been posting excerpts of interviews we’ve conducted with “Zach”, a young gay hockey player who played defense for a perennial powerhouse team in the upper Midwest. He’s shared his thoughts on teamsmanship, growing up hockey, his concerns about being out on his squad and in his home, and most importantly, his love of the sport.

When we first met Zach, he was still partly in the closet. Over the months he inched open the door more and more with his team and friends. Earlier this week, inspired in large part by the positive reaction among his teammates who know, Zach has come out to the world.

Nick Kleidon is a senior at the Breck School in Minneapolis. He played defense for the JV team and his high school career was shortened due to an injury sustained while playing football for the school last season.

He played his final high school game on February 18, and while he may not have been a points leader for the team this season, it’s been a high scoring year for him in other ways. In his off hours, he’s an entrepreneur and has received early acceptance to college, where he plans to study business this fall.

As part of the his school’s graduation requirements, every senior must address the entire high school in a presentation of 4-7 minutes, in his or her own words. Thursday was Nick’s presentation. He told his classmates, and anyone else listening, that he is gay.

As he stepped to the podium, an instrumental version of “Fix You” by Coldplay began and Nick addressed the students.

“This is how I lived the first 16 years of my life. It didn’t seem normal to be attracted to your classmates of the same-sex, but what can I say? I couldn’t help it. I simply felt that way. I was attracted, and the term gay never crossed my mind.”

This wasn’t an easy speech, he says, but it was the speech he had to give. His ethics teacher helped guide him through the writing process, and when Nick began to wonder if this was such a hot idea or not, his teacher told him simply: go with what your heart says. Don’t be afraid to share it.

“During my sophomore year, I sought the help of other kids who were going through the same problems. As it turns out, I wasn’t alone. About this time, I started talking to a kid from a nearby school. He was dealing with the same things I was. Fighting to just be normal, not knowing what to do. Through our many long conversations, I learned that I needed to get a handle on what I was dealing with. I kept praying.”

In time, Nick began to understand that being gay was just part of who he is. He came out to two close friends, his sister and her boyfriend. They were all fine with who Nick was.

“My junior year, I started talking with guys, and by the end of spring break, actually hung out with a few friends I had met. I found happiness in making friends with kids who have the same interests as I do. Not just men, but sports, music, computers. Before long, I had my first boyfriend. I was finally dating. For real. I was happy. Truly happy. I kept praying.”

Nick shared his speech with his parents ahead of delivering it. It was a difficult few days for him earlier this week. “We argued about it but came to an understanding.” Nick’s sister read the speech. Two years earlier, she delivered her own senior address from the same podium.

As he continued, “Fix You” began to slowly rise: “And high up above or down below,” go the lyrics. “When you’re too in love to let it go, But if you never try you’ll never know, Just what you’re worth.”

“In the most recent months, I had the opportunity to slowly come out to the Boys Hockey Team. Let me tell you, from the bottom of my heart, I can’t express how supportive and caring this group of guys has been to me. It’s quite amazing. Countless teammates have told me that if anyone messes with me, they will come beat the crap out of them. With the hockey team knowing, the class of 2012 found out soon after. They have been just as supportive.”

This would be a big day for Nick and his team. The day before, the Varsity squad met to discuss what the theme for Thursday night’s varsity game would be. They were playing in an area championship game Thursday night. The team captain looked at Nick and said, “What about rainbow?” They took a vote: rainbow it would be.

“Quite often people asked me why I ended up at this school, and I think this year I have finally figured out the true reason. God has shown me that how I am is how He wants me. I’ve stopped praying to be straight. I’ve stopped wishing to be something I’m not ever going to be. I’ve started praying for my parents, praying for my friends, for the world; in hopes of being accepted for who I am. For how I was born.”

Cue Coldplay music swell (“I promise you I will learn from my mistakes, Tears stream down on your face, And I…,“) and lots and lots of applause – and a few tears, we imagine.

Nick’s decision to step out comes at an interesting time. The hockey world and gay twitterverse have been pulsing lately with reports about a new effort; one that advances the late Brendan Burke’s own goal of gay players being judged only by how many pucks they move to the net. Outsports has confirmed that a new organization started by the Burke family and their allies, called the “You Can Play,” will formally launch during NBC’s telecast of Sunday’s Rangers-Bruins game.

In the spirit of Nick’s address, we too, must be open. One of us has been lucky enough to help out Patrick Burke and GForce on the You Can Play launch. The other one of us (that’s me!) has known about it, too, but held his silence. Pillow talk, donchaknow. But in the interest of fairness, we erected a firewall between this enterprise and YCP. As two old C-SPAN guys, we’re slavishly devoted to media transparency and full disclosure.

But enough of that; we all know what the real story here is. It’s guys like Patrick and his entire family who work tirelessly to, in Brian Burke’s own words, pick up the axe that Brendan used blazing a trail. It’s all the NHL players willing to draw the line on casual homophobia in the locker room, and the fans who do the same in the stands.

And it’s guys like Nick who know that life – like hockey – has risks and rewards, and you never get the second without the first.

“I’ve spent so much time dealing with it and praying over it,” he told us Thursday. “Once I started to see being gay isn’t wrong, after praying so long, at some point I think I was on the fence, but I needed to stand firm in what I’m saying. Everybody was so supportive, so encouraged by what I have to say. So cool.” 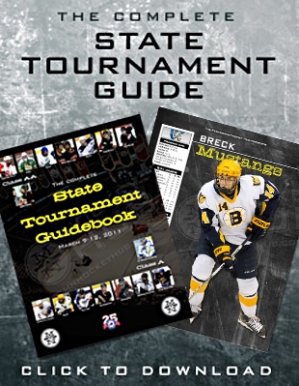 The Varsity team won Thursday night in a rainbow victory.

They’re going to the state tournament. We’re going to cheer them on every step of the way. And while he won’t dress for those games, Nick has proven that he too, can play, and he hopes to play in college next season as well.

This entry was posted in Heroes, The Thin Blue Line and tagged Coming out, High School, Zach. Bookmark the permalink.

14 Responses to Zach Can Play…As Himself