Right on the heels of the You Can Play launch, a few other stories have popped up that drafted in that same wake of acceptance and equality in hockey. There was the stirring coming out story of high school jock and hockey player, Scott Heggart, deftly told by Shelley Page in last Saturday’s Ottawa Citizen.

Later that evening in Ottawa, as news of Scott’s journey was starting to ricochet around the hockey world and beyond, another amazing story was developing.  During an intermission at Scotiabank Place, Christina (OTT) proposed to Alica (TOR) while nearly 20,000 hockey fans looked on and cheered for the happy couple. That my friends, is a busy news cycle.

But a day earlier, another hockey fan splashed in the news in a much different way, this time in the Chicago suburb of Arlington Heights. Bold too, theatrical perhaps, Timothy Tross’ story really plays into our sweet spot of politics and pucks. We’re Washingtonians after all, and we can’t outrun our pedigrees. 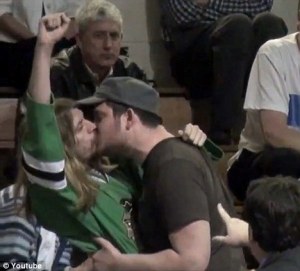 The scene: A Rick Santorum rally at Christian Liberty Academy. Nearly 2,000 Santorum boosters were on hand to hear the GOP candidate speak just days before Tuesday’s Illinois primary. 54 RNC convention delegates were at stake and the former Pennsylvania U.S. Senator was trailing “frontrunner” and noted faux Bruins fan, Mitt Romney in the polls. Santorum was in his sweet spot too, speaking to an auditorium full of Christian conservatives. 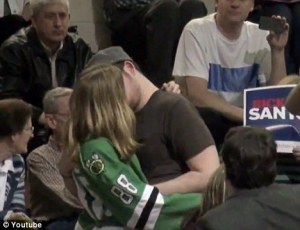 Tross and two friends, Ben Clifford and Sonny, all veterans of the Occupy Chicago movement, were in the auditorium too. Before Sonny picked up Timothy that day, he grabbed what he considers to be appropriate gear for a political action. A gasmask? Megaphone? Protest sign?

No. Timothy grabbed his green Chicago Blackhawks jersey, Patrick Kane #88. They had a plan. And the plan wasn’t to support Rick Santorum’s candidacy.

Friends for a number of years, Timothy, Ben and Sonny have had their run ins with Johnny Law before. Last October, Occupy Chicago set up camp in Grant Park and in the early morning hours the next day, they were rounded up by Chicago’s finest and arrested. There too, Timothy sported Blackhawks gear. “If I’m going down, I’m going down representing the crew,” he told us on the phone.

Timothy grew up in a sports family but was drawn to hockey at an early age. “I have baby pictures of me in a Bobby Hull jersey…. My grandfather and I watched the classic games replayed on TV with, “…Mikita rocking it!” In short, Timothy was a die-hard Hawks fan long before he was a political provocateur. He played street hockey as a kid with roller skates and trash cans, but told us, “I totally sucked at skating on ice.” Timothy has three jerseys at home: the St. Paddy’s Day green he wore Friday, a black 3rd jersey (Toews) and a red home sweater (Sharp).  He also owns 5 Hawks sherseys and a bunch of team merch including pennants and a Winter Classic mini stick. 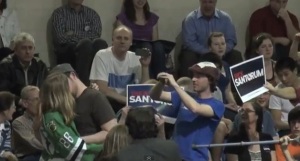 Taking deep breaths and counting down to go-time, the steeled their nerves and went for it. Ben rose up: “Mic Check! Mr. Santorum, American families will never truly be equal unless you support equality for all Americans!” The cameras on hand to cover the event quickly spun around only to catch Timothy and Ben embracing and kissing. Almost immediately, Timothy felt his hair being pulled by a woman behind him while Sonny, taping the action, was being poked by a man’s cane. They were ushered out of the auditorium almost immediately.

As they were being pushed out of the hall, a chorus of boos rained down on them, and as our friends at Wonkette wrote:

“What’s this, two men interrupting Rick Santorum’s banal rambling to lock lips in a simple act of protest against homophobia?  ACTION TEAM FORCE PATRIOTISM TO THE RESCUE. Watch the excitable wingnuts spring into action and holler “U-S-A” over and over in a heroic attempt to ward off decency and tolerance from their midst.”

Timothy said that a “biker dude” ran after them as they were exiting and shouting, “You guys should get your asses kicked…. Patrick Kane would be sick [if he saw that]… He wouldn’t approve!” Calls to Patrick Kane for comment were not made so we’ll never know if he’d approve or not. We’ll never know…

The merry pranksters left the building and Timothy was, “still shaking.” A quick smoke outside calmed his nerves and moments later a Patch reporter caught up with him. So began the long strange media trip of the Patrick Kane fan at the Santorum rally.

Timothy was asked by other outlets if he was gay. He declined to answer saying a declaration one way or the other, “…would detract from the message.” He told other reporters, “I don’t think the message should be about what my sexuality is. It’s the message that he’s saying about sexuality that matters.” We didn’t press it with him, more than happy to have another gay hockey fan or a straight ally.

We don’t know who Timothy sees winning the presidential race, but he’s confident about the Hawks this season. Asked how he think they’ll do, he was very direct, “I expect we’ll take the Cup again.”

Next up for Timothy and his “offshoot group they call 21 Jump Street (twitter: @21JS_), the NATO and G-8 meetings in Chicago this May. City officials, already bracing for some springtime days of rage, seem confused, both granting while also denying the issuance of protest permits. Timothy, Ben and Sonny plan to be there as well.

We asked Timothy which jersey he expected to sport for those high profile protests, and he replied, “The Toews 3rd jersey. It’s a classy event; I gotta dress up.”

True to our C-SPAN roots, the video of Friday’s action:

Proudly serving gay hockey fans and players since 2010
View all posts by Craig →
This entry was posted in Chicago Blackhawks and tagged Hockey is getting kinda gay, Mitt Romney, Patrick Kane, Rick Santorum, The people united will never be defeated, You Can Play. Bookmark the permalink.