Tigers Roar Into the Playoffs 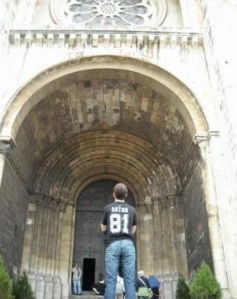 Let me be the first to say that the roar we’re bringing into the playoffs next Sunday isn’t due to our record. We finished 2-8, good for 12th place out of 14 in the Bladerunners Spring/Summer D League.

A lot of these teams should be playing (and have, in many cases) in C and sometimes even B League, and, as y’all readers know, we’re an island of misfit and (mostly) gay toys that has parts and pieces of varying skill levels and rustiness. Some games were a battle to put a single goal on the board.

Some games were a battle to clear the puck out of our own zone. Some, it seems, were a battle to hop over the boards because of the burning legs and lungs that can be attributed to a short bench on a late night.

Instead, the roar can be heard and felt in our locker room, for starters. A couple of weeks ago, I was lacing up my right skate and stopped to take it all in. Here was a group of strangers that was laughing, talking, trading stories, and dancing to the music blaring from the iPod player one of our players so graciously brought with her. In a short period of time, we really bonded and became a family of sorts, and that night in the locker room made that crystal clear. No more awkward, shy hellos as people trickled into the room — this time it’s jokes about that whiffed clearing attempt, losing an edge at center ice, falling over the boards when coming on for a line change. Say what you will, but I like to think we just might have the most fun, social locker room I’ve ever been in. It might be the best one in all of gay hockey.

The roar is also felt on the ice, in perhaps unexpected or under-appreciated ways. Despite not winning many games, we never have had a negative attitude on the bench. No matter what the score, what the situation, we’re always supporting each other. We congratulate each other on jobs well done, even if it’s simple as a nice outlet pass. We tap our sticks when our goalie bails us out (yet again). We bump fists and thank people for their hard work in the corners.

We smile. We laugh and we smile. 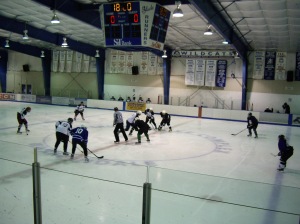 I’ll be the first to admit I’m probably the most intense and competitive player on our squad (Those to whom this comes as a surprise, party of zero — your table’s ready). My perfectionism sometimes gets the best of me, and I realize I’m far too hard on myself out there (as in everything else, really, but this ain’t Sally Jesse Raphael so we won’t even go there). But when I skate back to the bench and curse myself out en français, I realize that no one is pointing any fingers at me. No one’s pointing fingers at anyone else, either. Everyone’s just happy to be playing the game that we all love so much, the game that some stopped playing because they weren’t comfortable being who they were in their locker rooms and with their teammates. That roars louder than a winning record right now.

We hope that the roar is heard outside of the rink, too. We’ll be marching in Pittsburgh’s Pride in early June, and we’re hopeful that we’ll get most of our skaters to participate. This might be the first time that a gay hockey team has participated in Pittsburgh’s Pride, for all I know. But, really, it doesn’t matter if we’re the first — the goal is that we’re not the last. We want to grow and develop our community and let folks in Pittsburgh (and beyond) know that we’re here to stay, we’re here to play, and, yes, we are, indeed, gay.

And if you’ve got a problem with that, Brooks Orpik and his piercing gaze would like to have a word with you.

Ed. note: After filing his copy, Adam reports that on Sunday night, the Tigers lost to the Hounds in the first round of the playoffs, 7-4. A first round exit by a Pittsburgh team isn’t all that unheard of actually.

Wine educator and consultant in Pittsburgh making wine more inclusive and accessible. Specialist in South Africa and champion of off-the-beaten-path grapes and places.
View all posts by Adam Knoerzer →
This entry was posted in Gay Hockey Leagues, Pittsburgh Penguins and tagged Brooks Orpik, Gay hockey teams, I hope we do better than the Penguins, Pittsburgh, Sally Jesse Raphael, Tigers, You Can Play. Bookmark the permalink.

3 Responses to Tigers Roar Into the Playoffs