5v5 with Caps Across The Pond

It’s hard enough to follow and cover an 82 game hockey season (and the delirious postseason) from the comforts of our own zip code, so we really sympathize with those who have to do it far removed from DC. In this particular case, our friends at Caps Across the Pond, a four month-old Caps blog, follow the team from a continent away. We have a special interest in this Transatlantic “special relationship,” since Mack, our new Sabres correspondent, will be shipping out to Scotland soon for a semester overseas. Nothing like tuning into a Caps game on a pirate feed at midnight.

The CATP team is headed by Cam Blackwood, a British high school student and hockey player. Cam’s team also includes several stateside reporters: Tim – @timheartssemin; Jake – @JacobWare95;  Will – @Capsfanatic_wvu; Tucker – @mattmtucker and Hugo – @LaichABoss21. Recently, Cam spent some time with us on the Skype contraption so we could go 5v5 with him; five questions that he had to answer in five minutes. And before we start, here’s Cam’s player profile.

1. How did a British kid like you get into hockey?

I’ve been playing since I was 13, but I spent 3 years in DC when I was little. I live in Berkhamsted, which is awkwardly positioned between Milton Keynes and London – a half hour between each city. There are only two hockey players in the whole of this town – me and my brother – and that’s a town with 25,000 people. We play for the Milton Keynes Storm. If we were to compare ourselves to NHL players, he’s Sidney Crosby and I’m Milan Lucic. Or on  the Sedin scale, he’d be Daniel and I’d be Henrik.

This is going to make it sound like I’m really good, but I’m not – I play the equivalent of major junior over here. I’m saying that because there are only two tiers of junior hockey [laughs]. I play for the under 18s and I’m a 3rd and 4th line guy; I go into corners and do my thing, I’m not very talented – I just bash away to the net.

2. Tell us about the origins of the blog.

About 18 months ago, I started making youtube videos, focusing on the entire NHL,  and unfortunately people at school found out and it was all over the school computers so I shut it down because it wasn’t worth the trouble.

I want to eventually become a sports journalist, so I made the jump to a text blog last August.  I thought Caps Across the Pond was a unique, niche selling point.  I’m the equivalent of a junior in high school and work was ramping up so I found it pretty difficult to do all by myself.  I shut it down last November then picked it up again later in the season.

Around the 2nd round of the playoffs, I thought it was just too much to manage all by myself, but the guy who does the @AlexSemin  parody account [Ed. Note: It’s a parody?] became a big supporter of the site really quickly – he sent out tweets saying, “Check out this kid’s blog.”  Suddenly I went from 3 followers to over 100 in less than half an hour. I decided to get some new guys on board and I recruited them from the DMV.

3. Describe the hockey scene over there.

Hockey is regional over here. We call them hockey hotspots. There are only about 30 rinks in the whole country, so if your town has a team, the sport is going to be a lot more popular.

The Milton Keynes pro team, the Lightning, is incredibly popular, but the London team collapsed about five years ago. But the further north you go. The more popular it is, very popular in Scotland [Ed. Note: Listen up, Mack!]. My dad grew up in Edinburgh so he had a lot of exposure to it. Hockey might be the 10th most popular sport here. There are 4,000 registered junior players from a population of 65 million. Do the math. Sheffield and Nottingham are big hockey towns. I’m a STH for the Lightning and they get a good 2,000 people at each game. They sell out. If the KHL expanded into Europe and London got a team, I’d be very happy. With the Olympics here, there’s a huge discrepancy in sports funding taking place. They fund so much sport but none for ice hockey. It’s a shame.

We have a national team and I actually played alongside some of those guys in summer leagues. They’re Division 1 and almost got promoted up but lost out to Kazakstan in OT. It was really close. Hopefully soon we’ll see them compete against Canada, Russia, the US, all the big guns.

4. How did you become a Caps fan and what are you thoughts about last season? 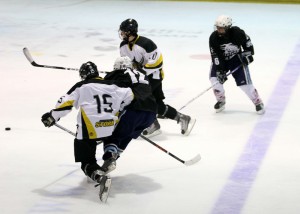 It was convenient, really, growing up there helped. Whenever I played NHL on my Play Station, I’d always select the Caps. Dad brought me back some Caps gear from his travels to the States; that helped. Then all the excitement about Ovi signing, so it seemed like a real exciting franchise… to capture a Cup [laughter].  I think we can. I don’t think we’re meant to play defensive hockey. We didn’t draft that way. We can evolve that way long-term, but we’d require an entire rebuild, trades, and really change things up. We’re a run and gun offense team and no coach is going to change that. We have to work with the players we have and we need to capture the Cup with them.

5. How do you follow the team from 5 time zones away and do you feel isolated as a fan?

ESPN used to have the rights to the games and I recorded them, but they gave that up – so now I resort to watching feeds on the Internet. A 7:15pm puckdrop means it’s a midnight game over here. If it’s a school night I won’t watch unless it’s playoffs. Or sometimes I’ll watch without my parents knowing [Ed. Note: They know now]. I’ll watch the feeds and check NHL.com and twitter all the time. 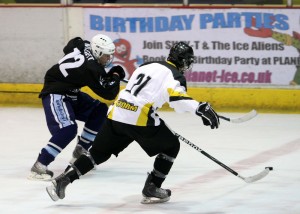 It’s tough at school especially – “Shut up Cam, you’re going on about ice hockey again.” Ice hockey is the second most popular hockey over here. It’s annoying. With my teammates it’s different. I’m at the rink twice a week so I can get my fill. We’ll talk about the Caps, we’ll talk about everything. I’d love to talk about it more with people – but that’s where twitter helps. This would’ve been hard 10 years ago without social media.

Your guy Mack better have broadband because he’s going to be watching feeds. If the withdrawal symptoms get to be too much, he should go see the pro team in Edinburgh – they’ve got the Edinburgh Capitals, and they play at around ECHL level.

I’ve got a couple of friends that are looking to take up hockey at the university level. People are getting into it, but no one is prepared to stay up late to watch. I’ve taken friends to the pro games here and they’ve been into it. Friends like watching on youtube in the school library – when we’re supposed to be working. Football and rugby rules the pubs but most shut at midnight and I’m not old enough to get in because I’m 17. I play rugby too, for my school team and that gets me some respect there. The rugby guys think that hockey is OK because they see it as an equal to rugby, not like soccer.

Overtime: What plans do you have for the site for next season?

I’m going to try to define clearer roles with some assignments. We already have that to a degree – Tim is our satire writer, he does pretty funny stuff. He’s a bit like you guys when you write for RMNB [nervous laughter and sheepish grins on our side of the iPad]. I’ve been reading RMNB for a couple of years. It’s their kind of writing that really got me into it and made me start writing as well. We’re going to be updating far more often. I’m going to write a huge post in September ahead of the season so people can get a good idea of what it’s like to be a hockey fan over here.

Shootout: Granted, there’s a small hockey population over there, so if you can’t turn people onto the game, can you, at a minimum, just turn them onto hating Pittsburgh?

I’ll do my best. Actually, we’re taking a school trip to the States next April and my teacher is quite a big hockey fan and he’s going to try to get us all into a Caps game. I’d love to do a meet up with you guys and the rest of the Caps folks.

We are so ready for this British Invasion and can’t wait to host these guys!  Follow Cam on twitter here. Good luck guys. Let’s Go Caps and Let’s Go Storm!

Proudly serving gay hockey fans and players since 2010
View all posts by Craig →
This entry was posted in Washington Capitals and tagged Caps Across The Pond. Bookmark the permalink.