Lockout: What Went Wrong And How To Fix It

I’ll start this off by saying outright that I am on the side of the players. I will try to keep my rhetoric to a minimum, but I can’t promise I won’t have an obvious slant. I believe not only do the players deserve an equal share of hockey-related-revenue (HRR), but they also deserve a system that forces owners and general managers to honor contracts in full.

The latest CBA negotiations were a whirlwind of Randian philosophies from the owners, and a firm, but often stubborn, stance from the player’s union. The owners have been focused on increasing their share of the HRR by 8%, which using revenue numbers from 2011-2012, would equal roughly $264 million. The players have been trying to prevent salary decreases and a less drastic cut in their share of revenue.

The latest proposed HRR numbers from the league set the players’ share at 49% for the first year of a six-year deal. The proposal from the league that came just days before the CBA expired did not roll back player salaries under existing contracts, but did call for players to cede money via escrow. Among other (rumored) economic issues preventing a deal are arbitration rights, entry-level contract formation, and free-agency issues.

When it comes to player salaries I could talk numbers until everyone’s head starts spinning. But one thing my brief time in law school taught me is that everything should be put in simple terms. Salary numbers and economics are far from simple. I will do my best to avoid confusion. 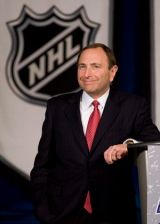 Essentially, the owners and the league took home 43% of HRR under the previous CBA, now they want 51%. While a 51/49 split is very equitable and reasonable, the 8% shift on both sides is rather steep if they want it to take place over a one year period. There is a problem with the owners’ proposed model that they fail to see why it won’t work. The majority of NHL fans couldn’t name 5 team owners without using Google or Wikipedia. The owners are not the reason we watch the sport, spend our money on team merchandise, or attend games. A perfect example of this is the tradition of boo-ing Gary Bettman every chance we get.

We still give the league, teams, and players our money despite who the commissioner is, and despite who makes decisions on behalf of the team owners. Frankly, we just don’t care about that stuff, all we care about is hockey. We want to watch the greatest athletes in the world play the greatest sport in the world. The fact that the Aquilini family owns the Vancouver Canucks, or that John McConnell owns the Columbus Blue Jackets is completely irrelevant. I’m not paying to watch them, I’m paying to watch Cory Schneider (hay boyfriend!), Ryan Kesler, Hank and Daniel, Brandon Dubinsky, Jack Johnson, RJ Umberger, etc.

From my study of the recently expired CBA, the arbitration rules, entry-level contracts, and free agency seemed to be reasonable and fair across the board. Why the NHL and NHLPA can’t agree on them now is startling to me. Perhaps some of their hesitation to agree on new contract formation and enforcement rules has to do with the core economic issue of HRR sharing, or maybe they are close to making an agreement on those terms but have put them on the back burner until the big issue gets sorted out. I haven’t been able to find too much information on that topic during my research.

I know some people are saying “why are millionaires fighting with billionaires over money? Just drop the puck already!” Well, a big problem with an attitude like that is the complete lack of respect for the players and owners. Their salaries are important to them, just like yours is to you. Imagine your boss tells you that the company made record profits last year, but he thinks you deserve less pay for doing the same work. How would you feel? The numbers involved are irrelevant, the real issue is the fact that decreasing salaries in the wake of record profits is not only backwards, but irresponsible.

Whether you make $8.00 an hour or $4 million a year, a pay decrease in this kind of situation is unwarranted. You made the product great, you were responsible for the sale of the product, and now your boss says you aren’t worth what he thought you were before you did all this great work, you’re actually worth less. That, my friends, is why this isn’t just millionaires fighting with billionaires over money. It’s about workers fighting management over a lack of respect and honor.

The longer the new CBA will be in affect the better it is for the league, players, fans, and the sport. Two lockouts in less than a decade is a huge problem that comes down to management. League management, ownership, and player representatives cannot focus hard for a few weeks in the off-season to improve upon the business structure of the league. It is not a problem that can be solved easily, they shouldn’t treat it as such. A constant communication between players and owners is essential to the safety of the league.

Perhaps the biggest issue I have seen regarding the CBA negotiations is the fact that management, ownership, and the league proposed and authorized long-term, front-loaded contracts since the 2004 lockout, but have since reversed their stances on them in less than a year. Remember the Kovalchuck contract debacle? The owners need a more consistent approach to contract formation over the long-term, and the league needs to establish a litmus test to decide if the contract is within the limits of whatever terms present in the CBA. The NHLPA needs to do more to ensure the players do not agree to questionable contracts.

The owners have a responsibility to their players to not only treat them with respect, but to pay them a fair wage. Hockey players are already the lowest paid professional athletes in the big four leagues (NFL, NBA, MLB, NHL). In fact, the highest paid athlete in a team sport, Alex Rodriguez ($30 million), makes almost triple the highest paid NHL player (Brad Richards at $12 million for the next two years). The market share, overall revenue, and the lack of a salary cap in baseball play a major role in this statistic. But even in a league with a salary cap (NBA), players are paid significantly more on average than the NHL. An average NBA salary is $5.15 million, with $3.8 billion in revenue. Meanwhile, the NHL salary average is $2.4 million with $3.3 billion in revenue.

But the owners don’t just have a responsibility to the players and fans, they have a responsibility to their cities. Without an NHL season, arena/venue workers aren’t needed, parking lots remain empty, food-service workers inside arenas aren’t needed, restaurants and bars will see overall sales decrease, servers won’t have customers, the list is endless. When this happens to hundreds of workers and dozens of local businesses, the cities’ overall economies suffer. In an already shaky economic climate in the US (more favorable in Canada), preventing the 2012-2013 season in 23 cities (22 if you count NYR and NYI as one city) is irresponsible. Owners, players, and league management need to recognize that not everyone is in the same financial situation as them. Many people are living paycheck to paycheck, making barely enough to afford necessities, and they need the 41 home games per season to work and bring home enough money to feed their families, pay bills, save for school, etc.

Then we have employees of the teams in fields like IT, sales & marketing, advertising & promotions, finance, human resources, communications, legal, merchandising, broadcasting, retail & licensing. All these people have jobs because of the NHL season, because the league schedules games and the players play. Without the games, these people are very, very likely to receive pink slips very soon. I have applied and interviewed for many of these positions within NHL and AHL franchises.

Now I’m glad I turned down a job working for the Panthers. If I had taken it, I may be stuck in a very expensive city while unemployed. The owners and players would have not only broken my heart as a fan, but my bank account as an employee of a franchise. I’m not saying everyone in the league should be completely selfless and think only of other people’s jobs and not their own. What I am saying is that when they focus on getting more for themselves, they end up hurting those who rely on them for employment.

This lockout, like in 2004-05, will not better anyone’s situation. The owners will still be filthy rich after missing a full season of new NHL revenue. The players will still have contracts with their teams, and still have much more financial security than most. But those with middle-class jobs working for NHL franchises, they will be out cold should they lose their job. The NHL and NHLPA seem to disregard these people when considering lockouts and labor stoppages. It’s pathetic.

Speaking of pathetic, the league issued a statement on September 16 that explained in part the crux of the notation complications, and a hindsight analysis of what they did wrong. What the statement fails to say are the two words the fans and employees want to hear, what they need to hear, “We’re Sorry.” Those two words from the league, perhaps even the players’ association, would have gone a long way with many reasonable fans. But it’s too little too late. The league has said what it wanted to say, and that’s all we get.

I know I am getting a preachy and showing my bleeding heart side, but you can’t prove me wrong here. People rely on their jobs as ushers, bartenders, event security, etc. They will be most affected by the lockout, not the players, not the owners, not the fans. We still have the AHL, ECHL, major juniors, NCAA, IIHF, and Euro leagues we can follow. Meanwhile arena workers and those who benefit from the home games in those 22-23 cities across the country and 7 in Canada may have to find another job. In a job climate that is less-than favorable, that’s tough to do.

I apologize for my soap box rant, I’ll get down now. But I hope everyone looks at this lockout not as players being greedy and wanting more money, but as owners failing to keep a commitment to their employees, their cities, and their teams’ fans. In my opinion, it was the owners’ greed that caused this lockout. Paying players less while increasing their own HRR share was a horrific proposal. Luckily pay decreases are off the table, though, and the owners and players can focus on the HRR and secondary economic issues.

Should the issues resolve soon, and we still have a season, I can’t wait to cover the Blue Jackets for all you lovely readers.