Posted on October 7, 2012 by mackinthebox

Hockey Night in Scotland and Ireland

Is it October yet?  Yes, October is here, and with it comes all of the glorious things fall has to offer–apple picking, pumpkin-inspired everything, corn mazes, and of course, the seasonal return of the world’s best sport, ice hockey!

Except of course, that this year is different. All too reminiscent of eight years ago, the NHL and NHLPA have failed to come to terms on a new collective bargaining agreement. As John Vogl from The Buffalo News puts it, “a bunch of rich guys can’t figure out how to split $3.3 billion per year.” As a result, First Niagara Center and the other 29 NHL arenas will sit dark during forfeited games.

Over two weeks have now passed since the start of the lockout. All preseason games have been cancelled, and only a small miracle is likely to prevent regular season games from following suit. But there is hope , and there is hockey.

Any NHL player eligible to play in the American Hockey League right now is doing just that. For the Sabres’ affiliate Rochester Americans, that includes rising stars Marcus Foligno and Cody Hodgson, vet Luke Adam, and a few other Amerks who spent some time at the FN Center last season. Most NHL clubs are focusing marketing and promotional efforts on their AHL brethren, which is likely to be a very good thing.

There are also the East Coast Hockey League, Central Hockey League, Western Hockey League, and numerous junior leagues to boot. A handy website you might find useful is called Hockey Team Finder, which searches all of the aforementioned leagues, plus NCAA D-1 teams. 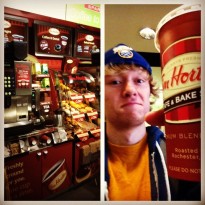 I’m doing my fall semester overseas and recently attended my first Elite Ice Hockey League (EIHL) games in Scotland and Ireland. And although hockey in the U.K. does not enjoy quite the popularity of soccer and rugby (or cricket for that matter), there are positive signs. Much to my surprise, this Canadian wannabe found a Tim Hortons in the Dublin airport. There’s no place like home, no matter how far from home I may travel. 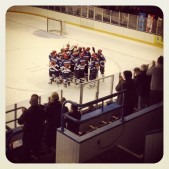 Last week, the Edinburgh Capitals defeated the Hull Stingrays 4-3 in a seven round shootout thriller that had all 673 in attendance on their feet!

The EIHL level of play is probably comparable to an ECHL game, but having never been to one of those I can’t say for sure. Nevertheless, just seeing hockey play was a welcome experience.

This weekend I took in games in Belfast and Glasgow, so there will be lots more to report regarding the good old hockey game on the other side of the Atlantic as the EIHL season progresses. Lat night, the Belfast Giants topped the Nottingham Panthers 3-2 (SO), at Odyssey Arena, and Glasgow’s Breahead Clan face the Sheffield Steelers tonight – puck drop at 6:00pm (BST).

Back in North America, I don’t know when this year’s lockout will end. I hope it’s soon, but optimism is becoming increasingly scarce. Regardless, just because the NHL doesn’t want to play nice doesn’t mean all of the fans have to sit in time out. Get out, go see a game and support the teams who, if it weren’t for the lockout, wouldn’t be getting that support and exposure. 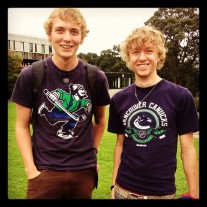 Half way around the world, I’ve found hockey fans. There’s no telling where you’ll come across one – Dublin, Ohio or Dublin, Ireland. And where else but Bonnie Scotland can a Canucks and Sabres fan so peacefully coexist?

All of that being said, Let’s go Amerks! And let’s go my new home team, the Edinburgh Capitals! So for the next few months I’ll continue to Loccupy Scotland. Or perhaps, Lochupy may be more appropriate.