For every screaming, rabid Caps fan that packs into Verizon Center (where’s the Capstraunaut guy, anyway?) figures suggest there’s more than 10 – and perhaps many more than that – at home, watching on the magic palette that is the HDTV.  There’s a relatively small crew of people responsible for bringing every moment of every Caps game into your livingroom: the team at Comcast SportsNet Washington. We met them last year – they took us on a tour of the remote production truck – and have been big supporters since.

Still, with everyone who wears a cup – and even your humble writers – in training camp, we wondered whether the CSN team would be doing the same. So we phoned up Bill Bell, CSN executive producer of live events, director of Caps hockey coverage, and all-around great guy. You know the rules – 5 questions in 5 minutes, plus an OT and a shootout:

1. So Bill, every player seems to be working their tail off in training camp. How are you guys getting ready for the broadcast season?

Bell: “We don’t need to go to training camp per se. Most productions have two levels, above line and below line. Above line are the hosts, producers and directors, who have to execute the content and our story lines. The below line folks are all our talented technicians who run camera, audio and tape. All those men and women don’t need training because they’re experienced. For them it’s almost like riding a bike. But for the above line people – I was telling our producer Steve Farrell, he’s the guy in charge of coordinating what our story lines, what we’re looking to accomplish, and that’s hard. But it’s really just getting up on that horse again.”

2. How do you get that sense of teamwork back again, so you can work to your best? 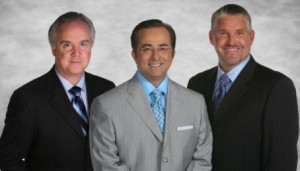 Bell: “It’s camaraderie, teamwork. Me, Joe B, Craig Laughlin, Al Koken and Steve Farrell, we’re friends as well. That translates on the air. A lot of our conversations off the air are about our jobs, about hockey. So we’re constantly collaborating as well, through email, tweets, conference calls; in short it’s the camaraderie of us working together for so long, that translates into friendships, and those friendships translates into us working well together – and that coming out over the air.”

3. How have you kept fresh and involved during the lockout?

Bell: “Their (the above line contract staff) perception of this whole time away is different from mine. Me, being a staffed individual and having to oversee football, I kept myself busy. But at the same time, you’ve got to have that other foot in the door to be ready for hockey. And so for all of us, we’re all natural hockey fans. Individually we’ve all still got our fingers on the pulse, so at the drop of a hat we’re ready to bounce back into it because it’s such a big part of our lives.”

4. You direct a lot of different sporting events. What is it about hockey that stands our, or makes it special, for you?

Bell: “As a young man watching the game and playing the game, I just found it incredibly artistic. I was just blown away what these men could do on very thin blades on a sheet of ice. We all know this game as being very physical at times, very brutal. But there is a layer of this game that hockey people know that is a beautiful game. That’s what I see; I see the beauty of the game and the things these men can do that the average person can’t, and they make it look so easy. I’m really wrapped up into the artistic side of the game. Being a director, I’m trying to make my own art, so to speak.”

5. What’s new for this season in terms of CNS coverage? 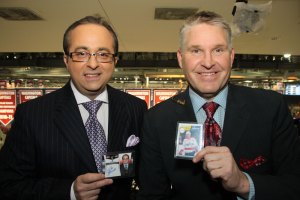 Bell: “We’re very fortunate our general manager has given us the tools to put a top-notch production on the air, so we’re not changing anything there. We have one of the biggest home complements of the league, and so we’re fortunate. The only thing that will change is that we’ll have less time to tell our stories because we have fewer games. So we have to be creative in ways of telling our stories without being redundant every night in a very short condensed period of time.”

OT: Do you think the fans will come back?

Bell: “I think that’ll vary from market to market. I personally think we as a society are getting used to work stoppages. Whether it’s football or basketball or hockey, we almost accept it now, and then when it’s back it’s back. When it’s not with us, we find other things to occupy ourselves as viewers. I don’t think there’s going to be this massive backlash by fans by not showing up. I think in hockey towns, and places that sell out like DC, that’ll be the case next Tuesday.”

Shootout: Well, we’ve seen a lot of hockey coverage around the US, and we both feel  blessed to have what is clearly one of the best teams in the game.

Bell: “We take it very seriously, obviously, but we also have to incorporate the element of fun. That makes it normal. There’s enough pressure on us as individuals to begin with. I think me, as executive producer and director, for me to go in there with both barrels blazing and put too much pressure on people, that’s not realistic for us. We place the bar very high and hold everyone accountable, and we do that by making everyone feel like they’re a part of it, and that translates into great teamwork.”

Bell, Farrell, Koken, Beninati, Laughlin and the entire CSN team are our Cup winners for broadcast excellence. And a lifetime achievement award goes to our spirit animal, Alan May. We can’t wait to welcome these old friends back into our home.

Check out the tour we did of the production truck last year and meet the men and women who make the magic. There are no people like show people!