Lucic and Seguin and Bruins, Oh My!

So I’m a new voice here at Puck Buddys with a particular interest in the kindest, sweetest, most widely loved team in the league: the Boston Bruins.  The utterly fascinating story of how I went from clueless New Zealand expat to Bruins fan in Toronto will be left for another time, this post is for the important stuff – the B’s outstanding start to the shortened NHL season.

Events during the lockout were not particularly heartening for B’s fans.  Timmy Thomas was off in his crazytown bunker in Colorado, and confirmed that he would not be playing this year.  Milan Lucic apparently showed up to training camp thoroughly out of condition, and we all had to hope that Tyler Seguin’s game wouldn’t be as much of a mess as his Swiss apartment.  As it turned out, we needn’t have worried.  At the time of writing, the Bruins are 2-0-1, splitting two games with the Rangers (losing one in overtime) and beating the Jets in a shootout.

Our crazy Finnish goaltender has, thus far, been a capable replacement for our crazy American goaltender.  Sure, the backup situation isn’t as good as it was last year, but I’ll take Khudobin over former Calder Trophy winner Steve Mason in Columbus any day. Lucic looks in pretty decent shape, even scoring the team’s first goal of the season, and Seguin’s skills remain as mesmerisingly smooth as, oh, I don’t know, the midsection of a Stanley Cup-winning rookie dancing shirtless on a bar.

More seriously, the Bruins look primed to be among the top teams in the East this year.  Our forward depth is second to none, with almost every player able to contribute in more than one way.  Nathan Horton and Lucic can score 30 goals, beat your ass, and run your goalie all in the same night. Patrice Bergeron provides face-off ability, scoring touch, and Selke-winning defensive nous in one utterly dreamy package. David Krecji has great hockey intelligence and the ability to accidentally concuss Sidney Crosby, while Seguin and Brad Marchand will score on your goalie and your sister in equal measure.

Even our fourth line is multitalented, and quite possibly the best fourth line in hockey.  Daniel Paille and Gregory Campbell are two of the best penalty-killers on a team with an excellent PK, while Paille has some serious speed and often gets shorthanded breakaways.  Unfortunately he has hands of stone, which is why he’s a first round draft pick playing on the fourth line.

Still, Campbell and the other fourth line star, Shawn Thornton, can be relied upon for 8 or 10 goals a year each, which is nothing to sneeze at.  Plus Thornton looks great in crushed velvet, and Campbell looks great in cutoffs with the Stanley Cup and some adorable dogs.

Our D also looks solid, if not as deep as the forwards.  Depth perhaps doesn’t matter as much on D, though, given Rask’s excellent goaltending and the fact that perennial Norris Trophy candidate and part-time easter bunny Zdeno Chara plays at least half the game every night. 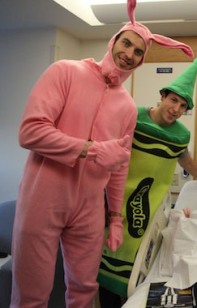 Still, it’s hardly a weakness, with the highly touted Dougie Hamilton playing with Chara while workhorse Dennis Seidenberg recovers from injury.  And with proven NHL-quality D-men in Andrew Ference, Johnny Boychuk, and (only the 2nd ever Cup winner from PEI) Adam McQuaid further down the lineup, the B’s blueline should be in good hands.

We’ll see if the good start continues, but honestly, given the B’s remarkably deep roster and the relative strength of the rest of the Conference, it’d be a disappointment if they didn’t finish in the top four after the regular season.  Beyond that, given the incredibly frustrating first round playoff against the Caps last year, I’m unwilling to speculate. Time will tell.

1 Response to Lucic and Seguin and Bruins, Oh My!