The Sid and Ovi Show

I know, I know … I am neither the Pittsburgh Penguins nor the Washington Capitals correspondent. So why am I writing an article on both of their superstars? Well first of all, anyone who knows me can tell you I have a huge obsession/crush on Sidney Crosby. I have read and own every book that has been written on him. I collect loads of fan memorabilia of him; from jerseys (Canadian, Penguins, and even Rimouski) to McFarlane figures, cards, etc. My jerseys numbers for the teams I play on at Chelsea Piers Sky Rink are all #87.

I cannot help it. From the second I heard of him playing in the QMJHL back in 2003 I was hooked. If I actually met him in person I would most likely pass out (I once got close though, seeing him get on the “away-team bus” after they played the New York Rangers about 20 feet from where I was standing … wooh, heart was pounding). And so of course, with my fandom of Crosby came the haters attacking me during the 2005-2006 NHL season and beyond who insisted Crosby was a joke and Alexander Ovechkin was the “real deal.” So the second reason is that I have had this comparison on my mind for a while and have long been a participant of this debate. (Also, I got Adam’s permission to write it and assuming you are reading it now, Doug and Craig did not mind either).

Now let us get something out-of-the-way before I continue. If you are one of those haters who simply says “Crosby sucks” or “Crosby is a crybaby” only because your team cannot handle his talent (ehem … Flyers and Capitals fans) you probably do not need to keep reading. I am sure anything you read that I write that is positive about Crosby you will probably just ignore, deny, etc.

Frankly, I do not understand why fans on opposing teams say things like that. If Crosby had zero professional accomplishments, okay. But Crosby has won every hockey award (except the Calder Memorial Award). He not only won an Olympic gold medal on 2010 but scored the game winning goal to get team Canada the medal. You want to boo him because you want your team to win, I get that. You want to cheer when he loses the puck, misses a shot, or gets checked by one of the players from your team, I get that. But to say that he sucks, I got the evidence to disagree. There I go. I already anticipated Crosby hatin’ and went off on a tangent. Ok, I am focused again.

So I know some people might be asking, why are you writing this article now? 12:30pm on Super Bowl Sunday is puck drop for the first meeting between the Pens and Caps. To many, that’s the real show of the day. Through the first eight games of the season, we have a decent glimpse of these two players: Crosby is 4-6-10, coming off a great game on Saturday against the Devils, while Ovi is struggling a bit, 2-1-3. Beyond these early season numbers, I’ll take a few steps back and offer a more comprehensive look at both captains.

Ovechkin has not put up the numbers as he used to in the last few seasons and Crosby has accomplished so much, how is it even a question? Well, I think it still maters. People still like to compare the two players and it is also still one of the most hyped rivalries going on in the NHL. I still think a Capitals vs. Penguins Eastern Conference final would be the NHL’s wet-dream series. It is also now with all the games that have come to pass that we can look back and have real information to use in the debate (as opposed to just saying “Crosby is better!” “No, Ovechkin is better!” “Nu uh!” …). So let us get into it.

I am going to compare and contrast the 2 players in several categories and argue which one I think is better (spoiler alert: I am going to say Crosby). To be honest, I think both of them are incredible hockey players. But I sincerely think one is a better player than the other. And I will provide my evidence and opinions to support why I believe so. 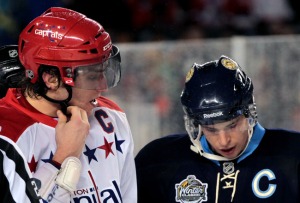 Yes, Ovi has won the Rocket Richard Trophy (for most goals) twice and Crosby has only won it once (and had to share it with Steven Stamkos). And yes, Ovi scored 65 goals in the 2007-2008 season, which no one had been able to do for almost two decades (and no one else has since at this point). However, this is a comparison of the two players overall, not just a season to season contrast. Looking at the players over the past 8 years Ovechkin seems to have peaked already whereas Crosby is still growing. Ovechkin had 65 goals in the 2007-2008 season and 56 goals in the 2008-2009 season. Since then his numbers have dropped. Crosby on the other hand has been increasing his goal numbers. In the 2007-2008 season he scored just 24 goals. The next season he scored 33 goals.

The next season, 51 goals. In the 2010-2011 season he scored 32 goals before he was sidelined by his concussion. Most said he was actually on pace to score at least 66 goals that season. That is the reason why I think Crosby is the better goal scorer. It almost seems like the NHL figured out how Ovi scores and has come up with an answer to it. But Ovi has not figured out how to adjust his game to get back to those high numbers. Meanwhile, Crosby has increased his scoring numbers and abilities. He will shoot from anywhere, the side, in front of the net, from the blue line, etc. Ovechkin has that powerful one timer he likes to shoot from the slot. Crosby shoots wrist shots, back-hands, and will even try a slap shot from time to time (though he is not very good at it [yet]). When Crosby sees something is not working, he adjusts his game to fix it. 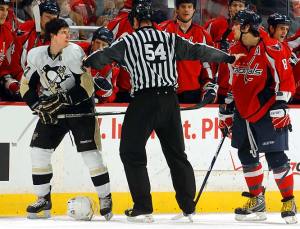 Both players are the current Captains of their respective teams. Therefore both of them are looked at as their team’s leader. Crosby was named captain of the Penguins at the beginning of the 2007-2008 season. The organization wanted to do it earlier but Crosby said he did not feel it was the right time yet (even further evidence of his leadership skills). Early in his career he was already showing his leadership capabilities to the team and the “higher ups” of the Penguins’ organization.  He made his voice heard in the locker room and on the bench. He was able to push and motivate the other players on the team, both young and old. When he was injured during Game 7 of the 2009 Stanley Cup finals he came back to the bench even though he would not skate the rest of the game to show support for his teammates. You do not really see this sort of role when it comes to Ovechkin. 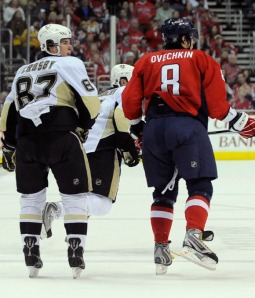 Ovi was named team captain in 2009 and unlike Crosby, where he was given a title to a character he was already playing, my impression is that Ovi now had to adjust to that being that character. I do not really see Ovechkin as the type of leader that gets his teammates motivated and going. Sure he is trying to be that person and lead by example. In the game in 2010 vs. the NY Rangers when the Capitals were performing very poorly, he got into his first NHL fight to try to motivate the rest of the team. (It did not work, they lost 7-0). You see Crosby constantly on the bench talking to other players, critiquing the last play, making a suggestion what to do the next time in that situation, etc. You do not see that as much with Ovechkin. He screams and cheers a lot when the team is doing well. But when they are not, he seems to tend to just shut down (as we saw in the HBO 24/7 documentary).

Face of the NHL:

From the moment Crosby was going to play in the NHL he was seen as not only being the face of the Pittsburgh Penguins but of the entire League. The NHL wanted to put on a new face after the 2004-2005 lockout. They wanted to personify a young and fresh look that would showcase talent and flashy goal scoring. Crosby was going to be that face. But after a few seasons people began to tout Ovechkin as being that face and a better choice than Crosby. Ovi was scoring often and glitzy goals. He had the rock-star personality; driving fast and expensive cars, going to clubs, etc. But in my opinion, that is exactly why he is not the face of the NHL.

The rock-star personality is not what should represent a professional sports league. You do not want the unpredictable, showy, large ego person. You want someone who embodies professionalism, humility, and simplicity. That is what Crosby does for the NHL. He does not put himself above his teammates. He always makes himself available to the press and is non-confrontational. He tries to stay away from controversy and help those less fortunate. That is why Crosby is the better face of the NHL.

Okay, that is my argument. That is (mostly) why I think Crosby is the better player than Ovechkin. And if all of that did not convince you, how about Crosby’s GQ pictures?

2 Responses to The Sid and Ovi Show