The last couple of days have not been good ones from Bruins fans.  On Wednesday night with eight seconds to go we were going to beat the hated Habs and Jarome Iginla and his impressive calves (hell, impressive everything) were coming to Boston. Alas, neither was to be.  Andrei Markov tied the game with eight seconds left and the Bs lost in a shootout.

And Iginla, well, in a brave attempt to take over from Steve Tambellini as the reigning worst GM in the league (Scott Howson having been taken out of the competition), Jay Feaster seems to have told Boston a trade was completed before he actually asked Iginla if he wanted to go. Which is, you know, an essential part of trading a player with a no movement clause.   End result is no Iginla, and the Habs retain a narrow lead in the Northeast over the Bs. Oh, and a great steaming pile of schadenfreude from the fans of other teams. It’s something you deal with as a fan of a team that a) has success and b) plays with an edge, but this felt excessive. 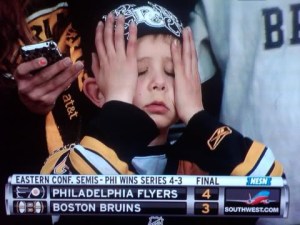 Artist’s impression of the author on Thursday

There were a lot of people taking a lot of pleasure in another fanbase’s despair.  As one does in these modern times, my response was to whine about it on twitter, which got some interesting responses. Most of said responses were along the lines of “uh, this happens to every team, suck it up.” I still think this was slightly different, but I realised they all had a point.

Being a sports fan seems to me to be an exercise in confirmation bias. We see the behaviour we deplore in other teams and (loudly) point it out, while ignoring or minimising the same from our own players. We complain about people dumping on our team, forgetting the same thing happens to everyone else’s team too.  For example, Claude Julien held an embarrassing press conference a few weeks ago to complain about other teams ’embellishing’, which was instantly and roundly mocked by fans of other teams. A parody video of it went up in no time at all. 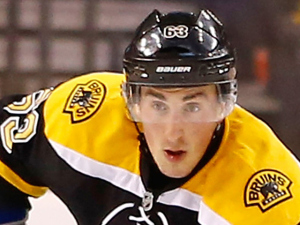 But a little bit of research reminds us that other coaches and GMs have given equally embarrassing press conferences in the past: see here  and here for examples. Likewise, I love to complain about Ryan Kesler’s diving (maybe that’s how he injured his hip), when Brad Marchand is almost as bad. And Habs fans like to bash Marchand when they have both PK Subban, diver extraordinaire, and Brendan Gallagher, who is basically the same player as Marchand.

One side of me thinks it’d be nice if we didn’t just irrationally bash rival teams – the competition is after all played out between the players not the fans. But on the other hand, the whole notion of sports fandom is completely irrational. Emotionally investing in a group of people you’ve probably never even talked to play a sport for enormous amounts of money doesn’t really make much sense. But damn it’s fun.

And some of the time, irrationally hating on another team while igoring the flaws in your own is part of the fun. Be a ridiculous one-eyed homer every so often, embrace the idiocy of fandom. Enjoy feeling smugly superior that something bad happened to the Bruins. It doesn’t happen very often.