As I’ve said before, the distance between winning and losing is the width of a skate blade. Witness Mike “The Slot Machine” Green: the puck bounces off his skate and left, and the other team has a layup on the doorstep.  The puck bounces right, Green catches it on the toe of his stick and rips it, and all the straight ladies and gay dudes swoon in top-shelf rapture.

Now, the entire city of Washington is balancing on that skate blade. Like the morning shift at a strip club, the Capitals’ season is up for grabs. It is a testament to how awful this team was at the start of the season that the playoffs are still not a sure thing despite this recent streak, but the way this lockout season will be remembered in Washington will be decided this week. Let’s get into it.

The Capitals play three games this week: against Toronto on Tuesday, at Ottawa on Thursday, and at Montreal on Saturday. Canada Week has begun in the nation’s capital like a syrup-soaked apology, and the Caps’ season is teetering on the precipice like a tipsy canuck sipping Molson. Yes, the Mighty Mighty Washington Capitals have won a league-best seven games in a row and are currently driving the Southeast division like the mad captain of a sinking ship.

We need to not kid ourselves, though; this baby is far from a sure thing. The Caps are only two points ahead of the eighth-place Rangers, and only four points ahead of fellow Southeast bottom-dweller Winnipeg. One loss, and we’ve slipped out of the top eight. Two losses, and it’s a long, lonely summer for the Capitals. That’s how close this thing is, so let’s not get too comfortable.

I’m going to propose two alternate realities to you: one optimistic, one pessimistic. Let’s examine how the next few months might play out if the Caps manage to cry havoc and let slip the dog sleds of war, tearing through Canada like the Keystone pipeline, and how things might go if the wheels fall off this Miata before we reach May.

A good groin is hard to come by in this town, and it comes back to bite the Caps. Brooks Laich never makes it back into the lineup, and his grit and good decision-making are sorely missed. Erat needs more than six games to learn a system it took the entire team several months to figure out, and he isn’t able to produce enough to fill the void. As a result, tough customers Matt Hendricks and Jason Chimera are brought back up to the top line to inject some sort of testosterone-driven urgency into the team, but everyone forgets that they can’t score. 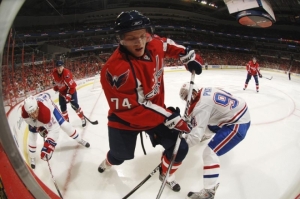 Meanwhile the defense, like a non-profit pimp, gives away too many scoring chances. John Carlson is hearing the calls from Hollywood for his services as a carpet cleaning spokesman, and that extra time on set is less time on the ice. Ol’ Spike Strip reverts to his early season habit of blowing tires on the back check, and Jack Hillen, like Obi Wan wailing that Anakin was supposed to be the chosen one, is unable to save him. The Capitals implode like a neutron star, and there are no playoffs this year for DC.

It’s a long off-season in Washington. The old echoes of “no top-six talent” come floating back like the damned wails of the ghost of Jacob Marley. This time, George McPhee can’t claim he’s backloading for the future; Filip Forsberg has by now been elected mayor of Nashville and has cut a platinum album with Carrie Underwood.

GMGM, breaking out in a cold sweat, runs to his red emergency phone and dials the Too-Good-For-Their-Age-Defensemen Hotline in Hershey, but there is no answer. Hershey has no more young studs to send to Washington to shore up our defenses; the well has finally run dry.  McPhee collapses on the floor of his office, and is shaken awake by an aid. “It’s Kuznetsov,” the aid whispers. “He says he’s not coming anymore.”

Meanwhile, Ovi and Maria spend the offseason on a goodwill tour, visiting theme parks and defeating all comers in any conceivable athletic endeavor. Alex Semin pens his tell-all memoir, and Ted Leonsis declares that the Wizards are now his top priority.

There is no joy in Mudville in this scenario. But it doesn’t have to be this way.

The Caps make poutine out of Toronto and Ottawa, and Montreal cries “merde!” as Ovechkin rolls over them without a thought like so much English grammar. Meanwhile, our centers keep making plays. Mike Ribeiro only knows how to move two things: pucks, and attitude, and he moves plenty of both. He and Backstrom make more assists than the staff of a retirement community, and the offense keeps clicking like Jaromir Jagr’s hip. The power play continues to utterly overpower opponents, and Adam Oates writes a hit song called “I Told Y’all So.” 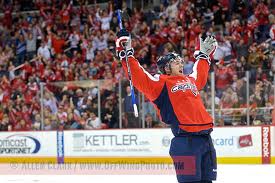 On the other side of the puck, Alzner keeps squeezing dudes against the boards like a cruise ship activity director and Mike Green finally realizes, “Wait, I’m on defense?” Holtby and Neuvirth are called on to make fewer saves than a Las Vegas priest, and trash is cleared from in front of the net faster than you can say “Orlov.” With the ability to move the puck quickly out of their own zone, and deftly around once in the attacking zone, the ice begins to tilt for the Capitals and good times are here.

Oh, and Ovi wins the Hart.

With an offensive savant behind the bench and a newly dedicated cast of players executing properly, this Capitals juggernaut could really make a run into the playoffs. The Capitals were a team sans identity last year, and they were still able to knock off the defending champs. As we saw with the Kings last year, it’s all about getting hot at the right time. The Capitals were slower to get up to speed this year than an Eli Whitney cotton gin, but with all the pieces in place and players coming back from injuries, the Caps are rolling downhill and have won 11 of their last 13 games.

When they get into the playoffs, they will face a field of five mediocre eastern conference teams, and three bona fide contenders (Pittsburgh, Boston and Montreal). For the Penguins, Crosby and Malkin are hurt, and as deep as that team is, the Pens need those guys. The Caps have beaten both Boston and Montreal this year, the latter in Montreal. There is not a team in the league that wants to play the Washington Capitals in the first round, and that is a new development.

So What Should I Look For This Week?

Watch the urgency with which the team is playing. When the Caps nearly collapsed in the third period in what should have been a blow out against Tampa Bay, it was because they reverted to their worst habit: the patented “lazy pass to no one.” Hockey is tiring. I play the sport, I get it. But most of the Capitals’ woes come from an unwillingness to skate hard to make the play that is available. It is easier to make an outlet pass to someone else and hope they do the work. But you will not ever win hockey games that way, period. As I’ve said, hockey is a game of a million consequent nows. If you see the Caps busting their asses to win little battles that you aren’t even sure are important, be glad and take courage. If you see them limping their way through the neutral zone and turning over a lot of passes, be worried.

A week from now, we’ll have a very good idea whether or not the Capitals are going to make the playoffs, and how deep they have a shot to go if they do. I don’t know about you, but if I have to watch baseball for the next two months, I’m going to scream. For that reason alone, I say, Go Caps.