Today’s abbreviated Game 2 Preview comes less than twenty-four hours after the Caps 3-1 victory over the Rangers in Game 1, and less than twenty-four hours before what is sure to be a systematic dismantling of the Rangers in Game 2. We’re going to start off with two reasons why the Capitals won on Thursday, and one big reason why they’re going to win on Saturday. Let’s get to it.

The Capitals beat the Rangers on Thursday by making long, crisp passes. Witness Steven Oleksy’s ruby red two-liner right to the tape of Marcus Johansson’s stick (let’s all savor that for a moment.) (Mmmm.)

If you had asked us, “Can Steven Olesky hit?” we would have said yes, emphatically. If you had asked, “Hey, does Steven Oleksy look like Daniel Craig and Vladimir Putin got freaky in the equipment shed of an ice rink?” Again, a definitive yes. But if you had asked us whether or not Oleksy would end up having one of the best assists in memory, we would’ve hurried up the F Street exit of the Gallery Place Metro and hoped you didn’t follow us up.

The Rangers applied pressure to the Capitals, both at even strength and when the Caps had the power play. That’s a smart ploy, because like an ill-placed underwear tag, it keeps the Caps from getting comfortable. This power-play toys with teams like those videos of Killer Whales tossing around wounded seals like playthings (hey, it’s nature, OK?) The Rangers took that away by stepping up the Caps in the offensive zone, and forechecking at the other end. Cram your stick in the gears of the machine and it will sputter and die.

The Captain gettin’ it dun

But Oates, like a glorious golden god, adjusted. Instead of skating pucks into and out of the respective zones, he had his boys send telegrams from one to the other. In hockey, just like in football, you beat a blitz by throwing right past it. I wish I could have seen the look on Torts’ face (hint: I bet it was a frown.) (Eds: like he just smelled old baby diapers.)

Reason #2: Do the Hustle – a Pyramid Scheme

Like Chris Brown with a boo boo on his hand, the Caps also beat the Rangers with their feet. I talk all the time about “building the goal pyramid” – winning the little, necessary battles that eventually put you in position to score. Last night the Caps were building pyramids so hard that you could call Tortorella “Rameses.” (Eds: where’s your God now?)

Multiple times, Rangers players slung the puck around the back of their own net, expecting safe receipt in the harbor of Blueshirt Bay, only to have a hustling Caps forechecker beat the puck to the man and turn it into an offensive attack for the good guys. There were stretches where the Caps kept the puck in the Rangers zone so long I assumed Oates was filibustering the neutral zone. For the first time in as long as I can remember, the Capitals looked like the team that wanted it more in a playoff game. Hallelujah!, Praise Oates.

Why the Caps Win Saturday: Braden or Bust

Again, this one comes down to Holtby vs. Lundqvist. When King Henrik, aka Pharaoh Hatshepsut (look it up) snatched that Erat slapper out of the air like so many coupons for half-off mousse, I gulped audibly. It felt like the Lundqvist was getting out his b-boy skull cap, in preparation of standing on his head.

So when Mojo and Chimera dented him twice on what were really a couple of cheapies, I was able to unclench. Lundqvist, as good as he is, is not a goalie who gets betters as series go along. In fact, he usually tends to show a bit of fatigue by the time games 6 or 7 roll around, whether physical or mental. The Caps adjusted brilliantly (sensing an Oates-tinged pattern?) They began with long bombs from the point. When those weren’t getting through, they tried baking some muffins from out far and throwing them off Henrik’s pads to generate rebound.

Sensing Lundqvist had better rebound control than a recently-dumped eunich, they proceeded to try skating it in deep and beating him in the slot. That’s the way to do it: keep it moving til the wheels fall off. Braden Holtby, on the other hand, has the mental fortitude of a chaste chess champion.

Bottom Line: If Holtby can outduel Lundqvist in Game 2 and send the Rangers back to New York peering up from a two-goal hole, this series might just be over before you can say “Borough.” 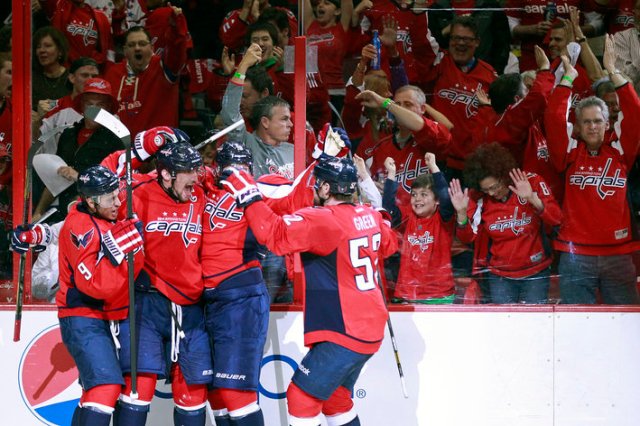