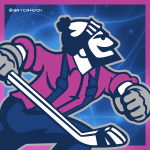 To quote Nathan Lane in “Birdcage,” I was nothing short of betrayed and bewildered by the Canucks this past season. It all ended with a thud when they were unceremoniously bounced out of the Playoffs in a first round sweep by the San Jose Sharks. A sad and sorry ending for a team that only two seasons ago won the President’s Trophy and was one game from winning their first Stanley Cup.

I suppose I should be grateful to have been able to watch the Canucks play any hockey at all considering the entire season was nearly a complete write-off due to the NHL lockout that lasted for 113 days. But honestly, I was having more fun during the lockout than watching the often tedious and uninspiring hockey played by the Canucks.

It is essentially the same core team from two years ago. Minus Cody Hodgson (don’t get me started). But they sure didn’t play like that Cup-contending team. I fondly remember when the Canucks would score SHGs, or would score the game-tying goal with 10 seconds left in the third period, then win in overtime. Or when the Sedins would dazzle us with their displays of hockey wizardry.

But this season the Canucks struggled on almost every front. Defense was wobbly and woeful. Goals were as rare as sightings of Tim Thomas. Goaltending was strong, but mired in the drama of having two starting goalies, which Cory and Roberto lampooned in an amusing video segment for TSN. And key players were constantly getting injured.

Nearly all Canucks writers still feel the Hodgson/Kassian trade was a good deal for Canucks. I think it’s complete bullshit. Just because Cody didn’t single-handedly lead the Sabres to the Playoffs does not make him any less talented. And the old “but he wanted out of Vancouver” excuse is weak. Yes, he wanted out of Vancouver because Vigneault and Gillis completely mis-managed that relationship and treated him poorly. The Canucks have faltered ever since Cody was traded away prior to last year’s Playoffs, and none of the new players acquired since have done as well. 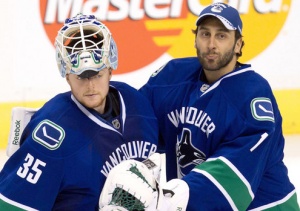 The mishandling of the goalie situation was the biggest mess and distraction for the Canucks. Cory Schneider was named the new starting goalie for this season while Roberto Luongo, with his enormous contract, remained on the roster. Then, in early April, Twitter was aflutter with hyperventilating fans who were preparing for the end of the Luongo era when he was called off the ice by Canucks management minutes before the trade deadline.

But nothing happened. A trade never materialized, which meant Luongo was stuck being Number 1 Backup Goalie for the rest of the season. I don’t know the intricate details of why a deal never happened, but, I’m pretty sure this was the biggest fuck-up by General Manager Mike Gillis so far. It will no doubt be a drama that continues to play out during the off-season.

Poor Alain Vigneault. The giggling, gum-chewing Head Coach didn’t have a chance against the pitchfork-wielding public who were calling for his head even before the Playoffs began.

Lots of people found Vigneault’s hands-off, laissez-faire coaching style a teensy bit off-putting while his team was quickly spiraling downward. I mean, if I were the Canucks coach, I’d be screaming and throwing shit around the locker room Tortorella-style. Perhaps he did, I have no idea. But whatever he was doing late last season and all of this season was just not working. The constant experimenting and tweaking of lines befuddled bloggers and started the “Fire AV” drumbeat that got louder and louder after each Playoff game loss.

Eventually those calling for Vigneault’s head got their wish. He and two of his assistant coaches were fired by Mike Gillis last week. 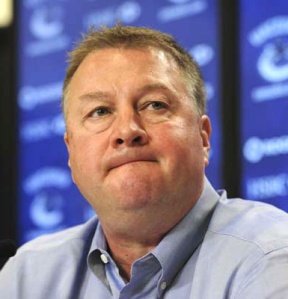 I’m amazed that, after mis-handling the Luongo trade and leaving the team without a strong Center for much of the season when he ended Manny Malhotra’s hockey-playing career, Mike Gillis is still the Canucks GM. Many point to him as the real reason for Canucks’ dilemma, and Vigneault was simply trying to work with what Gillis inadequately provided. But like the “Gilly” character played by Kristen Wiig on SNL, Gillis has yet to pay a price for the mischief he has caused. Or even say “Sorry.”

But now that Vigneault is gone, Gillis is left holding the bag full of problems that still plague the Canucks, including the additional burden of finding a new coach who can work with the team he’s assembled. But if the team continues to flounder and he flubs the Luongo trade, it’s possible Gillis could be looking for a new job this time next year.

While there was plenty to bitch about, there were a few redeeming moments during this truncated travesty of a season.

Canucks management got a lot of feel-good mileage when they introduced the Millionaires replica uniforms worn during the game with the Detroit Red Wings on March 16th. I was really looking forward to seeing them play in those uniforms and loved how they celebrated Vancouver’s long, rich hockey history and contributions to the sport we know and love today.

When Alex Burrows scored the first goal just 6 seconds into the game, breaking the Canucks record for fastest goal scored, I thought maybe this could be the turning point as they channeled Fred “Cyclone” Taylor and the Cup-winning Millionaires from 1915. No such luck. Detroit ended up trouncing the Canucks 5-2. We haven’t seen those Millionaires uniforms since.

Oops, this is supposed to be about happy moments. Back on course…

Thanks to my Canucks-season-ticket-holding Fairy Godmother, Mary, I was at the game on February 15 when Henrik Sedin broke the Canucks all-time scoring record. He scored his 757th career point, surpassing Markus Naslund who previously held that record. The entire stadium erupted into a long, boisterous standing ovation. The only thing missing was a large bouquet of flowers presented to Henrik and an encore. Unfortunately, the Canucks ended up losing that game to the Dallas Stars by one point.

BizNasty No Longer a Dickhead 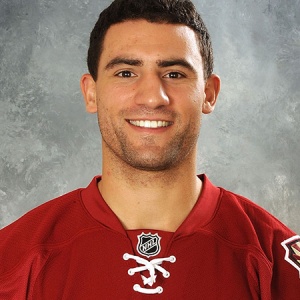 In my “Biggest Dickheads” post at the beginning of January, I included Paul Bissonnette (BizNasty), who plays for the Phoenix Coyotes, after a dust-up with him on Twitter last year. One night after the Coyotes played Canucks here in Vancouver, I posted another snarky tweet about him that I was sure he wouldn’t see because he had blocked me.

Well, he saw it and re-tweeted it. But surprisingly he unblocked me and we ended up having a private chat on Twitter that was short but sweet. Paul wanted to let me know that, while some of his followers may have hurled homophobic slurs at me, he supports gay rights and has no problem with gay people. I thought it was pretty nice of him to reach out like that. Now I can go back to thinking he’s hot again.

One last moment that I can never forget was when injured Canucks backup goalie Eddie Lack sent out this tweet in early March:

No, he wasn’t talking about Alex Semin. A photo accompanied his tweet which showed a bicycle seat splashed with spooge! For realz!! Lack emphatically claimed in a followup tweet that he did not do it. And I believe him. But, wow, I don’t think any other professional hockey player can top that tweet, not even BizNasty.

Thanks for the Memories

This is my final post for PuckBuddys. It’s been an absolute honor to be the first writer recruited for this ground-breaking hockey blog, but I’m, afraid I must resign my position as both Canucks writer and Western Conference Bureau Chief. When Craig and Doug asked me to be a contributor in the Summer of 2011, I thought they must be high or drunk or both because I knew nothing about hockey and was a newly-minted Canucks fan. So of course I said “Yes!” Since then, they’ve built an impressive stable of writers who provide the best rainbow-colored commentary about hockey you can find on the Internet. I’m proud to have been a part of it.

You can still find me on Twitter (@GayCanuck) making snarky, bitchy comments about hockey and Glee. Over and out. XO, Tom, a.k.a. GayCanuck

[Editors’ Note: We thank Tom for his service, good cheer and panache. He’s responsible for our single biggest traffic day (Ohai, Naked Kesler), and the banner we have at the top of the site. With any luck, we can talk (cajole) him into helping us with our off-season site redesign. Replacing him won’t be easy and we’ll start the search for his replacement immediately. The audition process promises to be rigorous; we’re looking for verve, sass and style. Extra credit will be granted in both the talent portion and swimsuit competition. Inquire within.]