This team and its legacy is seldom understood outside its own market. It joined a successful league in the early 70s and rose to prominence by the mid 70s. By the time the year 1980 arrived, they were the class of the league, equal parts feared and revered. It has been a long time since that hallowed era, and now the name is more synonymous with failure and very public gaffes then moments of triumph.

Their heroes that litter the history books faded into memory of only their fans, forever slighted by the media from afar because of the arena where they achieved their triumphs or the scalawags in the stands they achieved those triumphs for. Since then, generation after generation ground to dust struggling to match the team’s bright future to the weight of its lofty past.

Perhaps their most maligned aspect of their existence is their fanbase, painted as malcontent, boorish, and wrongly perceived as ill-informed. They sing their own songs, chant their own cries, laud their own heroes. In essence, to the untrained eye, they are weird. Their fans are actually insanely passionate and defined by that early success, that commitment to excellence in past years that became a glimmering ghost sweeping across the decrepit facility that once was a feared den of champions which had become a tomb to past glories rather than a birthing ground for new ones.

From afar, the team seems defined by it’s eccentric owner, his nepotistic hiring practices, rash personnel decisions, occasional frugality, and the propensity for him to publicly look ridiculous while family members clad in team colors stand nearby.

It’s other defining characteristic is a storied and bitter rivalry with it’s nearby big city counterpart. That rival carries an air of superiority and past glories all her own, dismissing the rogue empire of the 70’s and 80’s as an afterthought. Oddly enough, nothing burns the premier franchise like losing to that ‘afterthought’ and nothing keeps them awake at night, chilling the cackles of their hearts like thought of their foes resurgence.

The outcast team expands its sphere of influence, irking their rivals fans as they traverse down the highway to a new nearby arena, too close to the enemy’s sanctum for comfort. This is viewed as an affront to their traditional supporters, but also a chance to rekindle that past glory and expand the brand to heights unseen in sometime. The vagabond outcast team once feared, then forgotten, now poised to be a force to be reckoned with once again.

Is this story that of the Autumn Wind or of Never Say Die? It is the story of John Madden, Tom Flores, Ken Stabler, Jim Otto, Jack Tatum, of George Attkinson knocking Lynn Swann out, Kenny King galloping down field, Marcus Allen, Bo Jackson, Tim Brown and dethroning the Steelers and slapping the mighty 49ers in the face. But it is also the story of Al Arbour, Bill Torrey, Ed Westfall, Denis Potvin, Billy Smith, Clark Gillies knocking out Bobby Clarke, Bob Bourne flying down the wing, Pat LaFontaine, Zigmund Palffy, John Tavares, dethroning the Penguins and spitting in the eye of the New York Rangers.

It’s the story of two ancient Coliseums, and the search for hope to light the halls of these storied franchises. They are at different chapters in their rebirth after both flirting with fleeting notions of success in the new millennium. The Island Tribe is further along down this path, but the denizens of the Raider Nation are ready to enter their own resurgence. The parallels are too many. The two homes for each franchise minutes apart… the wacky machinations of an overbearing owner… the memories and hunger of a rabid fanbase for something better than mediocrity.

The long painful journey from legacy to laughingstock humbled their backers, but in spite of it all, the defining trait of DEFIANCE endures. Then, now, forever, an expectation and demand that another championship join the trophy case is the sole mandate.

The New York Islanders welcomed themselves back to the NHL last year. Again, we were told by the media and most of us believed, the team simply wasn’t ready to compete. However the stray pundit occasionally warned us, one day the fabled orange and blue monster of old lore in the Long Island Sound would awaken. That pundit would usually be mocked but there was an inkling when the time was right, we would to quote the great Sir Ben Kingsley, “never see it coming.” And lo, as one of my regular sources a dapper coliseum usher was so fond of saying, “one day we will just wake up and come to the realization we have a good hockey team.”

That’s precisely what happened down the stretch. The team bowed it’s back on the precipice of being out of the playoff race, they decided to go on an absolute tear and reveal themselves to be that aforementioned ‘good hockey team’.

The moment for a lot of the fanbase was a game in Washington, down 1-0 for 50 minutes, stealing a 2-1 win in regulation. Or the two defeats of their closest pursuer, Winnipeg, in the span of a week. Or the time they came back from down 2-0 in Montreal. Or the time they pulled the same feat in Madison Square Garden. Or in the confines of the Hockey Mecca, Toronto. Or in their house of horrors in Philadelphia. Or when they went into Pittsburgh and smacked the Penguins around. Or when they handed Boston 1 of exactly 3 home regulation losses.

These were the moments when you realized that this wasn’t the team that folded in the face of adversity. They thrived against the wind. That trait of defiance, the mentality of NEVER SAY DIE Was reborn. Eventually, the Autumn Wind will blow anew and like their on ice counterparts, the Raiders will remind everyone of who they were, what they are, and who they can be tomorrow.

The Islanders were the 3rd best team in the East on the road. The Road Warriors shined under the bright lights. Their star shined the brightest when needed the most.

Tavares would light their darkest hour time and again, even scoring the playoff clincher in the final minute against Carolina. For his work as the flag-bearer of the house on the Isle (or the House of El), he would be voted 3rd for the Hart trophy (player deemed most valuable to his team). The Danish Darkhorse, Frans Nielsen finished 12th in the Selke vote for best defensive forward. Their affable coach who looks like Fred Flintstone, the always upbeat Jack Capuano, was voted 5th best coach in the league, falling just short of a Jack Adams for his efforts (for his part, one hopes he at least received a Sam Adams).

The crafty Goalie turned GM Garth Snow was 6th in executive of the year balloting, and that’s fitting as he’s locked up 6 pieces of the core for a fraction of their worth; while stealing 6 gems off the scrap heap. 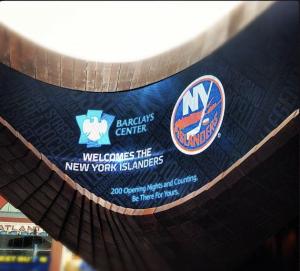 The off-ice uncertainty is over, as the organization turns it’s eyes towards Brooklyn. The on ice future is now, as the team turns its eyes towards the Stanley Cup. This is a young nucleus with it’s appetite whet by last season’s success, hungry for more. This team has upgraded it’s offensive firepower after finishing 8th in the NHL in goals scored. They have firepower and the hockey world is getting to know their names.

The era of the anonymous afterthought Islanders is over. The time for the world to gain familiarity with them is now. Soon comes contempt. And that oft battered fanbase that was told so many times over the years ‘you don’t matter anymore and you’ll never matter again’ stands ready to remind everyone exactly who they are and exactly how far they’ve come.

On the other cost, the Raider Nation spends it’s time in the darkness, awaiting their same clarion call back to action. It will come, as it did for the Island Tribe, with not even a gust of the Autumn Wind as warning. Before you realize it, that torrential maelstrom of nostalgia will erupt and they will be back, just as the Islanders are back.

The way the two legacies of the Island Tribe and the Raider Nation intermingle is a bit of serendipity. After All, the New York Islanders owe the impetus their birth to the WHA’s Raiders and both teams fanbases fly the Jolly Roger as their warning to other fans that they are in hostile waters.