Already Throwing In The Towel

After a mere six games, only one of those at home, it seems the New Jersey Devils are already throwing in the towel.

It doesn’t help that all six games have ended in losses for New Jersey, or that they haven’t looked particularly good in many of the games.  Still, it seems ludicrous to make rash decisions so early in the campaign.  But already, the Devils are going to jettison one of the offseason additions.  That’s right, the Devils are going to change their goal song.  Again.

Over the summer, the Devils retired longtime goal song “Rock and Roll Part Two“, possibly because the song’s performer, Gary Glitter, is a convicted child sex offender, but, more likely because Devils fans had grown accustomed to yelling “YOU SUCK” after the “HEY” chant in the song.  Seriously, anyone who tells you it’s because of Gary Glitter is crazy, because his first conviction for possessing child pornography was in the late 90s.  It’s the “YOU SUCK” and, more recently, the additional inclusion of the “(opposing team’s name) SUCKS.”  Here’s an example:

Some people (rhymes with “Harry Schmettman”) probably didn’t take too kindly to the fan additions.  My sister-in-law was instantly turned off by it at a game we attended in 2011.  However, 3 goals later, she was hollering it as loud as anyone and thirsty for more.  (Thankfully, Richard Bachman and the Dallas Stars were kind enough to oblige.  The Devils won, 6-3.)

In any event, Devils management chose to replace the song with something else this summer, and they chose Jersey’s own Bon Jovi’s “This Is Our House”.  It’s… well it’s not good.

This is a song that brings nothing to the table.  Disjointed rhythms, virtually no instrumentations, and a patter section immediately after the first line of the chorus.  What fan likes this?  Where was the test marketing for this?

So, after one home game, the Devils have already given up.  Fans received an email earlier today asking for goal song suggestions.  Jon Bon Jovi will be kicked to the Mulberry Street curb on his magnificent ass. Soooooooooo…. now that they’ve already hit rock bottom (both as a team and as a goal song), what should the new song be?  Here are my humble suggestions:

Come on!  What’s more emasculating than that for a team giving up a goal?  I can see it now, Elias goes top shelf on Henrik Lundqvist and “Oops I Did It Again!  I played with your heart…”  Who wouldn’t love that?  No?  OK…  What about this:

Isn’t it time the Devils embraced their Dark Master?

OK – this one is a bit more ridiculous, but I actually think it’s probably among the likely finalists, if it’s up to the Internet:

And the fans could even embrace making the ring-ding-a-ding sound.  (No.  No they couldn’t.)

Personally, I’d go for something more uplifting, more classic. like:

No matter what song the Devils choose, they were smart as hell to get that email out today.  It gives the fans something to talk about and bitch about instead of paying attention to the steaming pile of excrement that’s currently masquerading as an NHL team.  Hopefully the team’s issues (defensive coverage, a team wide lack of speed) get fixed as expeditiously as this goal song debacle.

One last thing, if they decide to use that horrible Light Em Up song, I am putting the team on notice.  Just the worst song.  Let’s stop celebrating this song, Internet.  It’s the Sharknado of music. 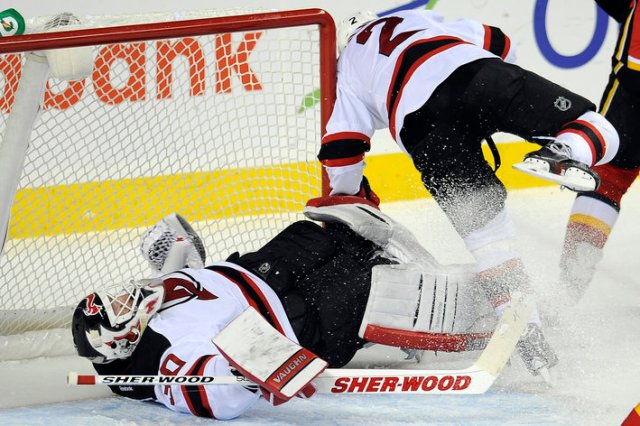 This entry was posted in NJ Devils. Bookmark the permalink.