Of Grinders and Grindr

As we gear up for a Big Gay Night Out at Verizon on Tuesday, December 10, an evening put together by our pal Kevin (@kemfeedak), we wanted to do a little investigation to answer a question that has long lingered: How many gays are at the Booth on any given night when the Caps play? Besides us, of course.

Aside from informal head counts we normally conduct while trawling (OK, cruising) the aisles and concourses, working our not-so-finely-tuned GAYDAR, at last Friday’s tilt with the Habs we employed a tool – Grindr, to get a quick census on whether there were any fellow travelers in the barn.

For the readers who may not be familiar with Grindr (most of you are straight, so we understand), it’s basically a hookup app for guys. Gay guys. OK, bi guys, too. Hell, even the curious ones. Whatever. Maybe some actual “social networking” happens on Gindr, but for the most part, as best we can tell, it’s for guys who want to face off. We had networking in mind, hockey net-working – and thought Grindr would be the perfect electronic divining rod to help us locate some gays.

On the interface, there are pics of nearby users, short bios and something Grindr calls “tribes,” a feature that shoehorns the gays into preset categories like Bear, Clean-Cut, Discreet, Geek, Jock, Otter, Poz, Rugged, Trans or Twink – none of those being an exact fit for either one of us… Grindr’s GPS function shows who’s in your immediate vicinity and their distance away. Clever, no? Grindr – the Internet fulfilling its promise.

A joke: Grindr at a hockey arena gives an entirely new meaning to ‘Top 6 Forward.’ 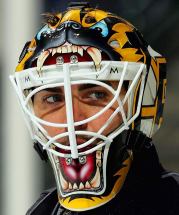 Inspiration for the Grindr logo?

We loaded the Grindr app on the phone right before heading to the arena. Neither of us ever had a Grindr account before [God’s honest truth] and we uploaded a profile pic and tickled out a short bio before we gave it a quick test drive. The bio was pretty tame. And based on lack of interest in us that it generated, it was apparently pretty lame: “Two gay guys with a hockey blog blah, blah…” Is it obvious we put very little thought or time into this experiment? Well, neither did Pasteur.

Even before leaving home, the gizmo started to buzz, beep and blip. After being online for all of two minutes, we got an amusing text from a nearby gay: “Top Shelf?” he asked. A cheeky and apropos double entendre, we giggled and replied back coyly, “Where your Mama never dusts.” Another user pinged us and asked, “Stats?” Who says romance is dead? We told him we were doing an experiment and were headed to see the Caps play the Habs. “What’s a Habs?” he shot back. We knew then and there we couldn’t network with that guy, on or off the ice. Off to the Booth we went.

We fired up the app as soon as we entered Verizon (after the rather unromantic wanding by arena security) and kept it running (and sucking battery life) for the duration of the game, right through the stirring shootout win. Shootout, heheheh. Grabbo!  The game was a big two points for the Caps but our Grindr results were mixed – mixed being a euphemism for downright crappy.

A brief aside: Since cel coverage inside Verizon Center is so spotty [insert irony here] we always bring along our Verizon mobile hotspot to boost our signal and reach. As we like to tell all the cute guys, “We’ve got a hot spot in our pocket and we’re ready to play!” Anyhow, if you ever see a Wi-Fi signal inside Verizon named “F*ck you, Geno” that’s us. Just ask us for the password and we’ll happily provide; it can accommodate up to 10 devices. 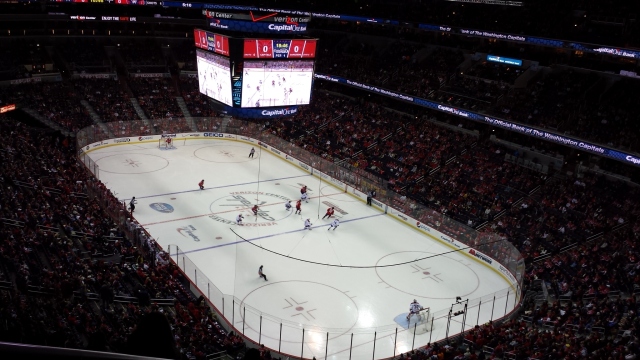 Our actual view. Not shown: The terrifying Dale Hunter banner

Grindr showed us some results inside the arena. Paydirt. There were 6 users within a 250 foot radius of our seats in section 406. You know the section, right behind the Dale Hunter banner? We sit there for most games, always fearful that the banner is going to descend from the rafters and beat the snot out of us. 406 is also known as the section that never sees the pizza, burrito or t-shirt tosses and most notably, the spot where that Chick-Fil-A bovine bastard doesn’t have the guts (or four-chambered stomach) to visit. It would be Verizon’s first animal sacrifice if he ever dared to. “You wanna go, cow? Drop the hooves and let’s herd!” 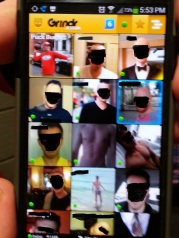 For each user that showed on our screen, we sent a short text: “Hey dude, you at Verizon?” We figured that would come off as inquisitive and coquettish. OK, not very coquettish. But hooking up wasn’t our goal. We were doing a science!

We sent out six texts and got just one reply from a guy in the arena. Our super sexy follow-up to him: “We’re in 406. We do a gay hockey blog and wondered if there were any other gaybos in here.” Silence. Radio silence. We didn’t check this user’s profile but it’s entirely possible he stipulated the 3 gay exclusionary F’s that predate even Grindr: No fats, no fems, no four-hundred level.”

Just as we were headed out of the arena – we ALWAYS stay for announcement of the stars (Ohai, Braden!), our phone buzzed again. A user replied to say he wasn’t at Verizon but was having dinner at Fuddruckers at 7th & H.  So much for the accuracy of Grindr’s GPS. Fuddruckers! We had a giggle. Not that it sounds all that dirty but we wondered what self-respecting DC gay guy would be caught dead in a trough like that. That’s a non-negotiable piece of our 3 F’s: No Flyers, no Fleury, no Fuddruckers.

We kid! Actually, Fuddruckers may have been better grub on Friday. Thoroughly sick of Thanksgiving fare, we looked forward to some arena food. Our $5 Teddog came on a stone cold bun and there was no relish at two of the fixin’s stations. But that’s a gripe for another time.

Another joke: Grindr at a hockey arena gives an entirely new meaning to odd man rush. 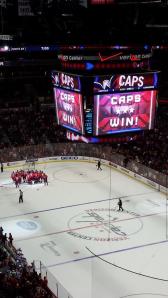 So there you have it. If we were the only two gay guys in a sold-out arena of 18,506, that’s cool, but it’s doubtful we were. Next Tuesday’s tilt vs. the Bolts will skew the results but we’ll then probably see a regression to the mean. [Stats!] But no matter, whether gay guys make up 2, 200 or 2,000 inside Verizon, we bet they’ll be made to feel as welcome as we are every time we head in there. Gay, straight or in between, Caps fandom is a lifestyle choice many of us have made. Our tribe.

There are other sites like Grindr out there, Scruff is one. We may give that one a try the next time we storm the Booth. We’ll ask some gays if there are any others we should know about. No sacrifice too great for the sake of science.

Proudly serving gay hockey fans and players since 2010
View all posts by Craig →
This entry was posted in Washington Capitals. Bookmark the permalink.

9 Responses to Of Grinders and Grindr