Are The Red Wings Ready for a Classic?

Posted on December 29, 2013 by WriterJeffAdams

It’s a rough season to be a Detroit Red Wings fan.

On Monday the season is half over for the Wings as they play at Nashville. It’s tough to say how they’ll fare in Nashville. They lost to them earlier in the season. However, Nashville has a losing record and sits at the bottom of the Central Division. Since the Red Wings tend to do better on the road this season, which is very weird for them, I tend to think they’ll end up with Monday’s game in the win column.

Meanwhile, as I write this after Saturday’s Florida Panthers win (4-3) the team is 18-13-9. Sure, it’s a winning record, and a record that has them in fourth place in the Atlantic Division and fifth in the Eastern Conference. If the playoffs started now, they’d land a wildcard spot.

I suppose I should be happy with this. But I’m not.

Nine overtime losses! Six of those have been in shootouts (clearly this is something the team needs to work on). It’s blot on the record and exemplifies what’s wrong with the season. Granted, the team gets crucial points for these losses and it’s better to have nine puts than none, but it would be better to have 18 points.

Coach Mike Babcock has called it out a couple times on HBO’s 24/7: Red Wings/Maple Leafs: Road to the NHL Winter Classic. The team is often not moving enough and not playing up to the level that it can. This is costing the team regulation wins that they should be getting, plus that behavior spills into overtime, where they end up losing.

The team seems besieged a ton of injuries. Usually they start racking them up closer to playoffs, but in just December key players Jonathan Ericcson, Johan Franzen, Justin Abdelkader, Darren Helm, Henrik Zetterberg and Jimmy Howard have been out. Zetterberg and Abdelkader returned for the Panthers game, but there’s still way too many Wings out for my comfort. There is word that Howard may return for Monday night’s Predators game. 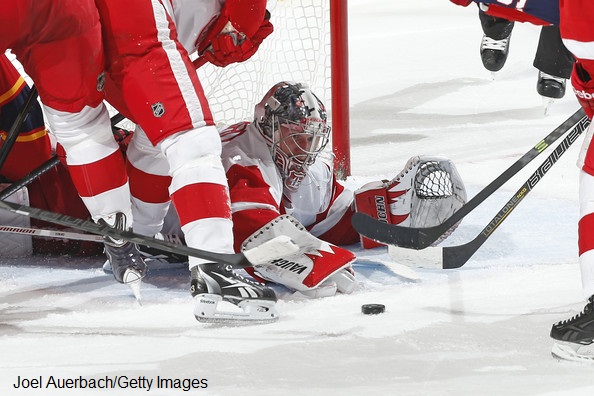 As rough as the Red Wings have looked this year, Toronto is in a similar position with a 19-16-5 record, they sit right under Detroit in the Atlantic Conference standings. On the upside when you look at the match up for Wednesday, the Wings bested the Leafs in a shootout less than two weeks ago in their first matchup of the season. So, on the one hand Red Wings are ahead in the head-to-head for the season, but that means Toronto will be on the hunt for redemption.

Both teams will be looking for a win because they both need it. As the second half of the season gets underway it’s going to be all about locking up a playoff breath and neither have that assured right now. I’m hoping the competition for the win will have both teams coming to the ice hungry and putting their best games out. That would make a spectacular game on the ice for the hundred thousand or so at the Big House as well as the NBC and CBC TV audiences.

We don’t want to see the teams that both Babcock and Toronto coach Randy Carlyle have dealt with in the first two episodes of 24/7 (I haven’t seen the third, which is having its first airing as I’m putting the finishing touches on this post).

It’s going to be interesting to see how the weather plays into the game too. It’s forecasted to be cold—currently the high is expected to be 17 and the wind chill could take that down into single digits. I can’t imagine that chill is going to be easy to play in. There’s a 30 percent chance of snow flurries too. The snow would be a cool addition—I loved the first Classic in Buffalo where it snowed all over the Penguins/Sabres 2008 outing.

This game will be won, and lost, by which version of these teams show up. If they both come to play, it’s going to an excellent contest. If only one of them shows up, it’s going to be a blow out like the uninspiring shutouts the Red Wings suffered recently against the Lightening (Dec. 15) and Islanders (Dec. 23). What if both teams show up for lackadaisical hockey? I doubt that will happen. I suspect the epic proportions of this game will keep that form happening.

PuckBuddys’ Tampa Bay correspondent, Eric (@operahockeyguy), will be in the Big House for the game and I’m looking forward to his in-person take on this mega event (and maybe he’ll snag me a t-shirt or something, too).

Shameless moment of self promotion…

Part of the Hockeytown Winter Festival, which has been going on in the lead up to the Winter Classic, was the annual Great Lakes Invitational moving from Joe Lewis Arena outside to Comerica Park. Since the University of Michigan plays in that, I decided to write a short sequel to Hat Trick that drops the lead characters into this special GLI. Hat Trick Overtime: A Classic Winter’s Tale is available as a free read on my website (just click the link and start reading). Since I couldn’t get to Detroit for all these awesome hockey activities, I’m glad I was able to send my characters!