Among the many hockey fans eagerly anticipating the arrival of the latest Russian phenom Evgeny Kuznetsov, count Dave Bidini. 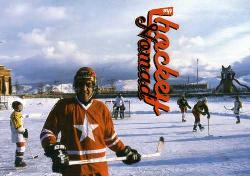 An accomplished musician, author, film-maker and all-around hockey nut, Bidini documented the life and trials of a young Kuznetsov 10 years ago in the film “Hockey Nomad.” Tracking the trevails of a 12-year-old Kuz and his struggling family, Bidini offers a portrait of a young “Zenia” as an unusually mature, yet uncertain pre-teen with one skate in an NHL future and the other in his hard-scrabble youth.

If you haven’t read “Tropic of Hockey“, do so right now. In the meantime, the first of our two-part interview with Canadian polymath Bidini. Today: the young “Zenia” as a 12-year-old phenom, and the pressures that came with that. Tomorrow’s will feature Kuznetsov’s young talents, and how they might manifest in the NHL.

PuckBuddys: First off, a little background. “Hockey Nomad” was based on your book “Tropic of Hockey.” How did that happen? I mean, you just don’t make a movie. How did that come about?

Dave Bidini: Well, ‘Tropic of Hockey’ did well and had a lot of attention, and, well, the CBC – kind of in the glory days that you came to them with an interesting idea, and when they were doing more long-form documentaries for sure, and uh…

PB: When they were doing crazy stuff like that?

Yeah, they were a little bit more open, but yeah, it’s timing, it’s all those things.

PB: So, I guess they called him Zenia…

PB: How did you settle on following him?

We got lucky. Our Russian producer did a lot of ground work, and we knew we wanted to find someone who represented the next generation of players, or certainly their hopes. 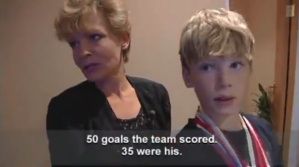 And somebody who wasn’t from the big city. And we wanted to find the equivalent of the inner-city basketball phenom, a kid who’d grown up in the sticks who’s only way out of relative poverty was to get into the NHL or to get some sort of attention playing hockey.

He was on the radar of our Russian producer certainly because they brought him from Chelyabinsk to Omsk to play. He was this kid who was the best player of any of the players in his hometown, and in the new power order of Russian hockey  – Omsk and Siberia – they could afford to bring kids in to play for their midget team, I suppose is the term. So he was on the radar that way.

PB: So what was your first impression of him? 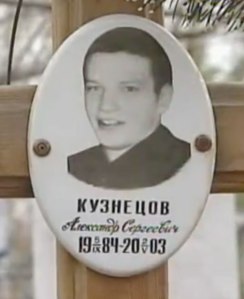 Well, I’m trying to remember whether we met him before we saw him skate. Definitely watching him, he had a very strong stride; he was definitely heads and tails above all the other kids his age.

Good shot, kept his head up, used all of the ice. All of those boxes you check when you’re looking at a young player. And his parents are, and by no means were at the time, stable at the time. And he’s one of those young players who was even-tempered, even-minded, certainly as a kid for sure. You know, his brother had been murdered, and he told that his dream was to have…

PB: A tournament (in his brother’s name)…

Exactly, it was just very mature and lovely and it seemed he’d come to terms with all of that, way beyond his years for sure.

PB: How did your impression of him change over the eight weeks you were there?

Certainly, we weren’t aware of the terms of the state from which he’d emerged from his family, and in terms of the environment that he came out of. And how his parents had struggled, and how they put their lives on hold, for what they were, to move to this new place. 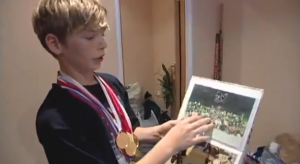 They were living in this dorm, it was very spartan, where all the teams were. So it seems as we got to know him, the odds certainly seemed to mount in terms of this kid never having a chance of any kind of success on any kind of scale.

Because it’s such a long shot. It also became obvious: Russia is very classist, especially in terms of hockey now. Visiting rinks in Moscow, there are SUVs and stretch hummers as far as the eye can see; all the oligarch kids playing. And not working class kids – so how’s this kid of working class means going to measure up?

But talent will itself out at the end of the day.

PB: Watching his mom talking in the movie, it’s obvious that no-one had processed the older son’s loss, and the pressures that were now on this 12 year old kid. Did you get a sense that he understood the pressures fully that were on him? 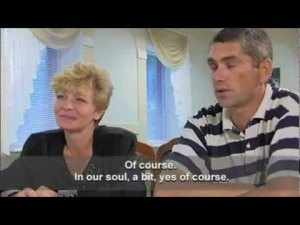 Yeah, it’s funny. I think he did; I really think he did, but he didn’t show it. He was really able to absorb that and I don’t think it weakened him in any way, and I think like a lot of rare athletes, he was able to use that – I think – as a motivating force.

And yeah, his parents; they were around him all the time and I’m sure he was reminded at every turn that he was the meal ticket. And I think that’s why you see somebody like that being who he is and what he is because he’s able to withstand that kind of pressure.

Tomorrow: Bidini’s thoughts on what Kuznetsov will mean to the Caps, how he will fit with the NHL, and what mentorship from Alexander Ovechkin will mean. You don’t want to miss it.

This entry was posted in Washington Capitals and tagged Dave Bidini, Evgeny Kuznetsov. Bookmark the permalink.