Posted on October 6, 2014 by PaulKaseman

Back on Wednesday Buffalo played their final pre-season home game against the Capitals of Washington D.C. Entering the game were numerous players projected to start the season in Buffalo including Moulson, Ennis, Stafford, and Stewart. They were followed by probably starters in Grigorenko, Reinhart, Mitchell. The defense itself had their own share of potential starters as well as projected starters. The likes of Zadurov, Benoit, McCabe, Strachan teamed with Gorges and Myers.

As a whole the defense played smartly. They kept the lowly Capitals, who were without many of their star players, to twenty-three shots on goal. Individually their mind unraveled. Constant miscues were abundant in both responsibility and skating. Defenders twisted their legs around falling over while trying to defend. They weren’t deked out of their shoes, merely couldn’t execute skating backwards nor could they execute the timing to go from skating backwards to skating into an offensive player. Zadurov was the main culprit of this illness that afflicted the Sabres’ D that night. Somehow he managed to find himself ill half a dozen times, carelessly gliding on the ice belly down. Enroth was unfazed by these distractions, clearly the jester Neuvirth put the defenders up to the task of distracting the starting goalie. Be it for increase playing time during the season or just due to forgetting which team he plays for, Enroth got the better of that clever former Capital by stopping all but one shot he faced securing him the starter’s gig and beating a hapless Cap attack paired with Sabres D futility. Somehow Neuvirth managed to convince elder D statesman, Tyler Myers, to join this Barnum and Bailey act on the ice. Oh the pre-season, what a folly of comedic genius you are.

Number 51 lapsed time and time again in his duties as a D-man. While in Buffalo’s zone defending, Zadurov consistently didn’t mark nor pick up his man leaving open what could have been a dangerous slapshot from Ovechkin (had the Caps actually cared about the game and played their starters). Instead just their D,E, and F lines had opportunities. Though Washington never managed to convert any of the opportunities off of Zadurov’s blunders, thanks in a high part to the back-checking of the offense. Zadurov seems to require a few more years of conditioning before he has a serious shot within the NHL. He possess the potential yet lacks the necessary vision of a quality defender. A couple more years of dedication at a slower level should acquaint him with maturity and responsibility. In his defense he looked overzealous to prove himself. Patience padwan.

Only one D-man was impressive that night, a 6-1 swirl over visiting Capitals. This player kept with the play, not once overstepping his bounds – chains of defense. He forced turnovers, created passes from great lengths, giving the offense a jump against the cowering Capitals. Jake McCabe was doing all he could to earn his own starting position. With Pysyk out McCabe is a similar player to fill Pysyk’s role. He’s a former member of the US National development program as well as a former Badger (University of Wisconson). He signed a three year entry level contract with the Sabres towards the end of the prior season. He immediately joined them playing seven games all in April. He started the day after he signed the contract. At that time the Sabres kept many of their top D prospects in Rochestser including Pysyk and Ristolainen. McCabe had seven games to taste the NHL without competition. This season he has not that luxury.

McCabe has been displaying all the signs of keeping up with the NHL game, especially during the pre-season. His best talent for the Sabres are his long passes. They are rarely intercepted, landing deftly upon the blade of a mate. He keeps a good pace and never overstretches his jumps into offense. Defense is sound in his mind and stature. As for his defensive attributes; he isn’t the hardest of hitters yet he is able to play a physical close game. He can dislodge the puck from shooters as well as keeping them to the side, forcing bad angle shots. He hounds offensive players like a basset hound does an escaped criminal. Look for Mr. McCabe to be a mainstay with the Sabres while Pysyk is out. Beyond that time-frame he’ll sure to see significant time with the Amerks if for nothing else but to see him play top minutes against the stiffest competition the AHL has to offer. 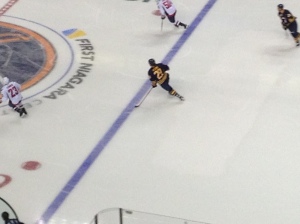 The player – the only offensive layer i’ve kept an eye on has been the fringe Zac Dalpe. Last Wednesday night he lacked that ingenuity that caused me to spot him out of a sea of blue a couple games ago. Rather this game he looked lethargic, like your family does after an extensive Thanksgiving meal. His break-away speed only came out in bursts like solar flares but never consistently. Though he typically feigns at physical contact he seemed more timid this night. Preferring speed over close proximity he skated from the center of the ice towards the boards. The vulcanized rubber and him parted often at the hands of defenders. There never appeared any creation of space by him except when he shyed towards the corners for a time-out. Sure the game was played closed (despite the score) but he never frolicked assertively at the defense and goalie like he had previously – like I was accustomed to witnessing. As the play moved towards the corners Dalpe remained a couple sticks distance from the puck, soft play offensively. He requires some more finesse, the ability to not be afraid of being hit, and to be more direct/stoic in the face of challengers. 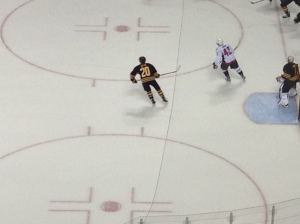 With all that being a regression of his offensive acumen, his defensive shell hardened! The wanderlust skater found a groove while defending. Hounding every white jersey that night which happened to stray away from the boards and towards the center of the ice. #20 ensured no success would be had while he patrolled the central strip. His shrewdness displayed the focus of Nolan’s work ethic and defensive responsibilities. Dalpe was calculating in his movements, gliding about, never in a place for more than a moment. He kept passing lanes from being open too long. The pace of the game continued to move because of him. Despite him and his line’s lack of points they kept the momentum of the game in favor of the Sabres, the final tally reveals so. Many a points were had after his shift was over and the team transitioning from defense to offense. On the night he was an even player for ten minutes and fifty-seven seconds while managing three shots on goal, one hit, and a takeaway in fifteen shifts. Clearly Nolan kept going with the hot line in the offensive zone. In the greater picture their success was in part due to the back-checking, pace, and movement of the minor lines such as Dalpe’s.

Mr. Dalpe is a fringe player to make the team come this Wednesday. Should he pass waivers and be with the Amerks he could truly shine as well as see call-up action a third to a half-way into the season. He’s more developed than other younger players with a similar style like Varone. So long as he can manage defensive responsibilities with his offensive talent while not being afraid of being physical, he could be a star penalty killer. Think of a player in the mold of Kirk Maltby but with more goals. Dalpe has potential for twenty to thirty goals in the NHL with a third of them possibly coming from the penalty kill. In the AHL I believe the hope is he gets accustomed to the physical aspect of hockey. After a few hits and getting back up he’ll realize that the hits only keep on alert and don’t hurt so much.

In recent news – Reinhart looks poised to start the season in Buffalo along with Zadurov. Don’t expect them to stay for long however. Neither should make it past game nine. I think they need more work (above for Zadurov reasoning). Grigorenko who’s surprised this pre-season has been sent to Rochester with the expectation (mine) to dominate then replace Reinhart or dominate all season long and get playoff experience with the Amerks (perhaps a trophy!). McCabe and Dalpe are expected to be in Rochester (should Dalpe clear waivers). I’ll be sure to monitor Dalpe closer while he’s in Rochester as well as stay abreast of the defense.