This may be the start of a holiday tradition for us. We found this this piece by Jeffrey Luscombe, in which he tells the story of a gay kid [a good Ontario boy] getting hockey skates for Christmas – and hating it. Despite his dad wanting him to be a great hockey player, putting him on skates at two, it didn’t stick. Given the chance on ice, he was more drawn to Dorothy Hamill than an NHLr. Jeffrey graciously allowed us to repost.

Continuing with my “Christmas in the 70s” series, I look back, not a the top gift guides like this, not the gifts I wanted and received like my pogo stick, the soundtrack album to The Sound of Music or my Stretch Armstrong (or even the ones I really wanted but couldn’t mention like an Easy Bake Oven), but the one I received almost every Christmas and never ever wanted. 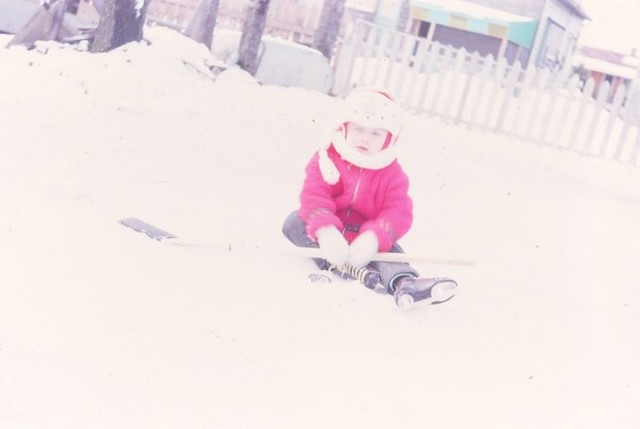 Jeffrey not enjoying his Xmas gift. Winter, he definitely would have appreciated one of the gift baskets in Canada more.

With visions of NHL hockey contracts dancing in his head, each winter my father would stand out back of our house in the freezing cold and flood our lawn with a garden hose to make my older brothers and me a backyard skating rink.

My dear old dad wanted your humble blogger to be a great hockey player. He had me on ice-skates before I was two years old. The logic being, I suppose, that the earlier I was on the ice then the better skater I would become.

Sadly, for him, this was not to be the case.

Unlike my older brothers, I hated hockey. I hated the cold. I hated the big heavy uniform. I hated the big smelly bag you carried the hockey accouterments in. And I especially hated how hockey skates hurt my feet. I told my dad that skating for long periods hurt my chest (my asthma not yet being diagnosed) but any protestations I made were dismissed by my father with a shake of his head as he would put those damned skates on my feet at the kitchen table each evening and then have me skate in circles around that backyard ice rink.

“You just need more practice,” he would say as he shoved me out into the cold.

On Saturday nights, he would have me sit in front of our huge Zenith color television and watch “Hockey Night in Canada.” The little Gay Groom did not like watching hockey anymore than I liked playing it. The games seemed to go on forever and I never really cared who won or lost. To pass the time as they skated up and down and up and down and up… I would critique the colors of their uniforms: loved the purple and gold Kings, hated the brown, yellow and orange Canucks, and decided that the Whalers needed a splash of crimson.

I would wait patiently for the end of the game when the camera would move into the locker-room and someone would put a microphone in the face of a half-naked husky hockey player with a bare chests and long sweaty hair.

When I was seven, the time came for me to join the city boy’s hockey league, just as my brothers had, where I played on a team called the Cardinals.

“Shouldn’t cardinals be in red?” I asked my dad when I saw my green uniform for the first time. “Stop worrying so much about color,” he said.

And I was hopeless on the ice. I tripped. I fell over. I slid on my face. And at times I simply gave up and lay on my back staring up at the lights on the ceiling as others skated around me. The lights are pretty from down here, I thought.

“Get up!” my father yelled from the stands. “For Christ’s sake, skate!”

After a few games, I was not put on the ice much and spent most of the game sitting on the bench with Tommy Young who was also a terrible skater (and who, incidentally, I would run into at a gay bar a few years later) and discuss important things like Tiger Beat magazine. Warming the bench with Tommy was fine by me.

(I should mention at this point that many gay men are great athletes and, particularly, great hockey players… and the Gay Groom’s own rottenness at hockey should be in no way seen as stereotypical of all gay boys. There are excellent gay hockey players out there – I am just not one of them.)

On the drive home from the neighborhood hockey rink after a Cardinal’s game my dad was always quiet. He was never one to mask his disappointment well and would look shell-shocked as he drove (rather like he did years later when I told him why my roommate and I had rented an apartment with only one bedroom).

“But he was on skates before he was two,” he would say quietly say to himself.

When we got home he would make me put my skates back on and skate circles around the backyard rink in the dark.

“You need more practice,” he said. 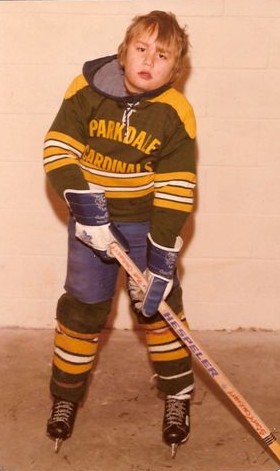 One night after he made me go out in the backyard to skate circles I waited until I saw him looking out the kitchen window at me. Then I stretched out my arms wide at my sides and, in the best Dorothy Hamill imitation my lousy skating skills could muster, I started to do big flamboyant figure eights on the ice. As my father’s eyes narrowed I even managed to throw in a few tiny little jumps without falling. The final spin never materialized properly but I still finished with a defiant “TA DA!”

It worked. He flew outside in a rage running over the ice in his stocking feet and pulling me by the shoulder, threw me through the back door.

My dad never made another backyard ice rink.

And as for your humble blogger’s first and only year playing hockey with The Cardinals? Now the only reminder I have of that unhappy winter is my team photo. TA DA!

Proudly serving gay hockey fans and players since 2010
View all posts by Craig →
This entry was posted in Book Reviews, Uncategorized. Bookmark the permalink.

3 Responses to Hockey Skates: The Worst Christmas Gift EVER