We Cover The Waterfront

Before there was Nats Park…

When the puck drops for the Winter Classic at centre ice on New Year’s Day, give a thought to what was on that exact spot just a few years back. Where on Thursday, the best hockey players in the world will face off, many gay men of Washington will remember it as the place where back door looks and odd man rushes had very different meanings.

That’s because the old neighborhood around Nats Park was once home to some of DC’s most notorious gay nightlife. The Pier, Lost and Found and Tracks were some of the more boisterous dance clubs. But there was far more to the scene than just dancing. 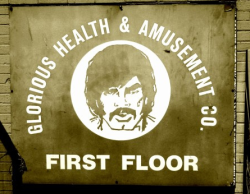 La Cage (aka the Petting Zoo) was a favorite spot to watch (or touch) the go-go boys, and the DC outpost of the Club Baths chain was where one went for… well, bathhouse sex. And then there was the Glorious Health & Amusement Company (aka the Glory Hole). The locus of the action, O Street, Southeast, was razed and removed for the ballpark. As best we can tell, that’s exactly where the player benches will be for the game. Those old joints are just memories now, displaced by the ballpark, soulless office buildings, cookie cutter condos and progress. The old cruise bars are vestiges of the past as well, displaced by Grindr, Scruff and soulless hookup apps. Progress? The sporting life.

To get a feel for what the area was like, DC’s Rainbow History Project did a nice walking tour map of the old gayborhood. Click to enlarge (if we had a nickel…) the pages below. 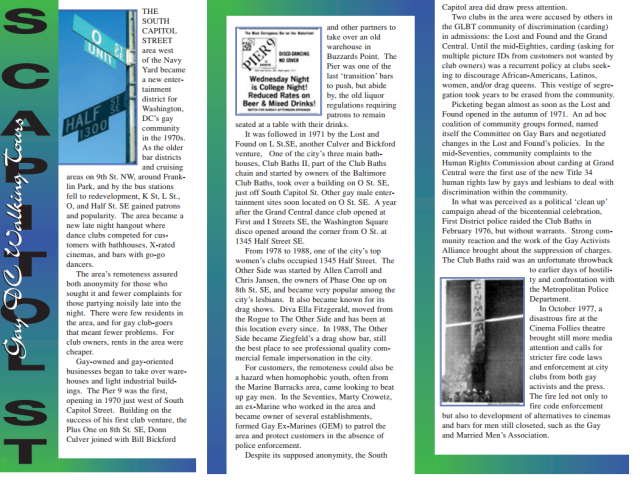 Proudly serving gay hockey fans and players since 2010
View all posts by Craig →
This entry was posted in Winter Classic 2015 and tagged gay history, Remember the L&F?, The old Gayhorhood, Winter Classic 2015. Bookmark the permalink.