Caps Game 6 Defense Due to Dummies, Not Doom 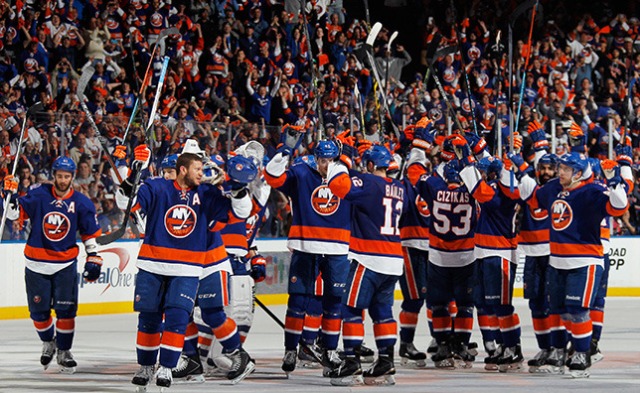 Just in time for gay sev of the first round of playoffs, the PuckBuddys welcome back Jason Rogers: writer, world traveler, Sperm Whale and “Hockey’s Hemingway.” No really, that what it says at his Twitter page, which you should totally go and follow right now.

While we couldn’t bring ourselves to revisiting Saturday’s game, we’re lucky Jason did. And now that we’ve got him doing Caps playoffs post-season analysis, we damn well better win this thing Monday night. Take it away, Jason!

The Capitals are not giving up goals because of any deficiency in their defensive scheme. They just have one bad habit: they suck, catastrophically, once or twice a game.

Disregarding the empty-netter potted at the end of the game, the New York Islanders scored two actual, contested, “how’s-your-mother” goals in Game 6.

The first, as scored by John Tavares and as noticed by Russian Machine, Japers’ Rink, Greg Wyshynski and Stevie Wonder, was the direct result of Brooks Orpik making a doo-doo-headed dummy play and trying to hulk smash the forward entering the zone.

Instead, he missed, removed himself from the play like John Wilkes Booth, and left defenseman John Carlson alone on an island like a exclusive resort.

The second goal, scored by Nikolay Kulemin, followed a blown defensive play like a smell follows a fart. A scrum took place along the bench, wherein several Capitals players stopped playing hockey, for a little bit, just to see how it felt, I suppose. 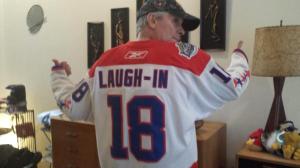 Now mind you, this recess from hockeydemica took place in the middle of Game 6 of the NHL playoffs. Ideal? Mais non. While everyone else enjoyed their little episode of “Laugh In” along the bench, John Tavares snuck into the zone with the puck. Alex Ovechkin and another Capitals player (this will be important so remember it) decided that they BOTH want to hit John Tavares, because the Russian Machine Never Brakes™.

They do, but with his Braveheart-like dying breath, Tavares throws the puck to Kulemin, alone in front of the net like a divorced fisherman. Kulemin dipsy-doo’s around a helpless Holtby, and the fat lady had effectively sung.

These dummy plays are fixable. They’re avoidable. They are blips and burps in what has so far been an otherwise well-oiled and determined defense. But that’s like a Ferrari mechanic telling you, “it’s just a gasket.” I NEED THAT GASKET! That gasket needs to work or else the whole thing goes to hell in an exquisite Italian hand-basket. The Capitals defense can win Game 7, if they keep their heads fore of their ass for a full sixty minutes, and not sixty minus-a-few.

They are a good defense, more than capable of keeping with the Islanders forwards. Whatever squeaky sneaky white-board scheme Trotz has drawn up for New York is working. The Caps, like a millennial with no hope of receiving Social Security, just need to let it keep working.

Jason Rogers lives in D.C. and writes for PuckBuddys, Japers' Rink, and The Classical. Follow him on Twitter @HeyJayJRogers.
View all posts by Jason Rogers →
This entry was posted in NY Islanders, Playoffs, Washington Capitals and tagged Brooks Orpik, Jason Rogers, John Tavares, Playoffs, We're too old for this. Bookmark the permalink.