Of Warriors, Writers, and Worthy Causes 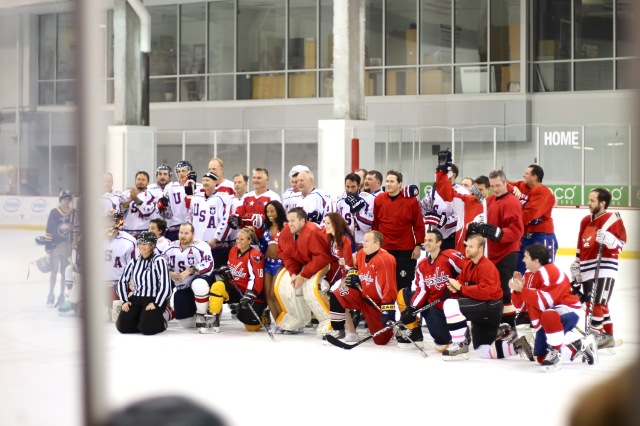 There are some things in life you don’t say “no” to:

“Want to borrow my Ferrari 458 Italia for the weekend?”

“Have you watched the Rafael Nadal Tommy Hilfiger underwear ad less than a hundred times?”

“Do you want to play in a USA Warriors versus DC media charity hockey game this weekend?”

When PuckBuddys’ benevolent virile overlords Doug and Craig told me that Brendan Sheridan of Capitals Hill was organizing a hockey game to benefit the wounded warriors of USA Warriors Hockey, I was intrigued. When they told me that their opponents would be the internet keyboard tough-guys of the local blogosphere, I could taste a well-deserved ass-kicking in the air, and I was sold. Even if it was to be mine own ass.

A note about USA Warriors Hockey: there are worthy causes, there are superlatively worthy causes, and then there is what this organization does. When United States Servicemen and Women return home from duty, they bare with them the scars and wounds of battle. Often, these wounds are physical. Often, they are not. USAWH uses hockey as a therapy for these men and women. For those craving competition – genuine, pity-free, hard-ass competition – they are given hockey. For those craving a purpose – a reason to train, to improve, to continuously better oneself – they are given hockey. For those in need of camaraderie – of teammates, of the lost feeling of brothers and sisters putting their bodies on the line for one another – they are given hockey. When I say USAWH is doing good work, I mean that like you would say food is good to eat or air is good to breathe.

SO, leaving the above poetic wax to coagulate into a candle, another aspect of the deal appealed to me: these worthy, heroic, deserving Warriors would be doing beskated battle with the scum of the Earth: us hockey journalists. You know those guys that take pot shots at professional hockey players from the safety of their mothers’ basements, those losers who make wisecracks about world-class athletes while shotgunning a fourth Red Bull and a fifth bag of cheese curls? That’s us, and cheese curls rule. Our day of reckoning was to take place under the harsh light of Kettler’s high-powered LED truth, in front of dozens of fans. Call me a masochist (please, oh yeah, say it), but I loved the idea.

Of course, there was one glimmer of hope for the media team: the last-minute inclusion of former Washington Capitals Ken Sabourin and Craig Laughlin, whose smiling face you might remember from every Capitals home broadcast for the better part of a decade. I won’t say I was star-struck when Locker walked into the media team locker room. I won’t say I sent a surreptitious SnapChat to my friends saying “OMG it’s Craig Laughlin changing right next to me!” I won’t say any of that because it would be embarrassing and unflattering and one hundred percent true. What I will say is that receiving passes from NHL hockey players in a real game was one of the great thrills of my life, sports-related or otherwise. So, thanks Ken and Craig. I owe you one…which I will probably send wide and out of reach of your sticks. 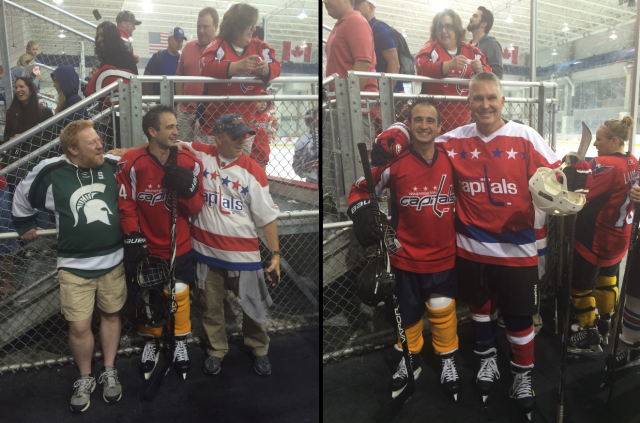 Sabourin and Laughlin were far and away the best players on the team – they literally played in the National Freaking Hockey League™ – but the real ringer, the secret weapon waiting to be revealed, was Laughlin the Younger, Laughlin the Quicker, Craig’s daughter Courtney, fellow CSN television personality. Courtney played collegiate hockey, and girl can skate. And shoot. And pass. And make a whole bench of curmudgeonly hockey writers leap to their feet and scream “GOGOGOGOCOURTNEYGOSHOOTYESSSSSSSS!”

As the publications of repute will show, ages and ages hence, the Media team blew a two-goal lead in the third period, eventually going down – like the HMS Prince of Wales – in a shootout. This victory was assured by a sprawling glove save by the USAWH goalie that would make Johnnie Cochran jealous.

But perhaps I’m burying the lede here: all proceeds from the 50/50 raffle that took place go directly to the USA Warriors Hockey team to help their players afford equipment, travel expenses, and a maid service to help them clean our sorry butts off the ice after the game. 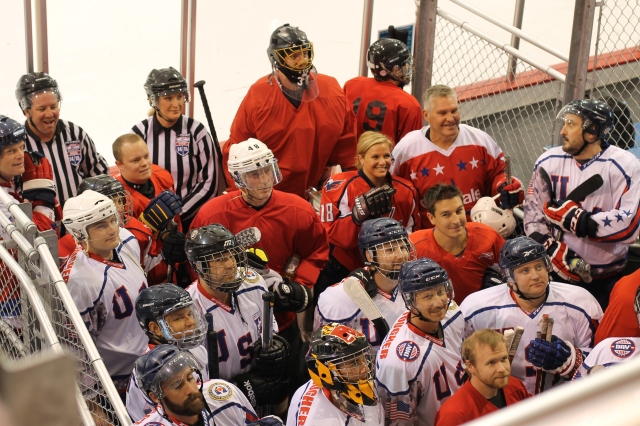 Your Warriors and writers, and one great cause. Photo credit: Elisabeth Schettle

So next time you hear hushed whispers and excited rumors about the SECOND annual (fingers crossed) USA Warriors vs. DC Media charity game at Kettler a year from now – be sure to come, be sure to say hello, and be sure to give a little somethin’ to a team of hockey players who have already given you so much.