First, let’s get the obligatory pleasantries out of the way: Happy %@#*!# Birthday Coach.

Sur la Table:  There’s really no better game fuel than a hearty coq au vin.  Tyler Florence can hook you up with a quick and easy game night recipe.  It comes together nicely and is best served over egg noodles. Note: Heavy up on the bacon.

The Hair Cuttery:  Put us down as in favor of the new looks.

Dreamboat John Carlson’s buzzcut and Alex’s fresh, trimmed cut got a lot of attention yesterday.  We like them shaggy, but close-cropped is pretty hot too.  Both of those guys are striking no matter what style they happen to be sporting.

First Course: That lackluster first period had all the makings of a long, sad evening.  Three off-sides in the first PP?  All of a sudden that coq au vin wasn’t sitting too well.  But as the second course was being served, our tummys finally began to settle down.

The Goalette?: Maybe we’ve got to do some more reading this morning, but why isn’t there more kvelling about Alex’s GWG slider last night? 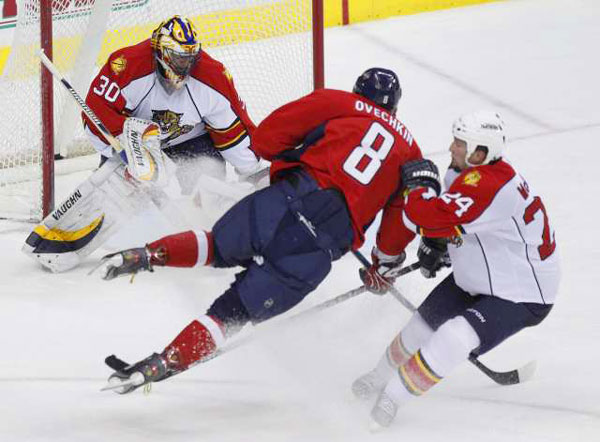 Sure, it’s good to see him work his way out of that miserable and seemingly endlless scoring slump, but his acrobatics last night while being tripped up looked nothing short of spectacular to us.

Fehr and Balanced: On a bit of a streak himself, WaPo’s Katie Carerra profiles Eric the stud here this morning.  He’s sure been the go-to guy to provide that needed spark. MOAR!

Hitler may hate this guy, but can we love him anymore than we do now?

Hippy, Hippy Shake:  Despite any scoring slump, Sasha remains a personal favorite.  Anytime he drops to the ice in a slump we feel a little woozy, and last night it wasn’t because of all that Pinot. 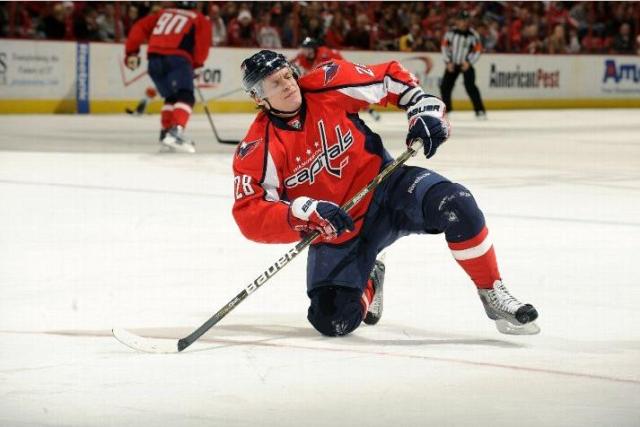 He’s listed as day-to-day and we will continue our vigil and hope for a speedy turn around.

And speaking of Doll Baby Sasha, we were watching on a bit of a delay last night and in the second period, our DVR burped (thanks Comcast).  We ended up missing 12 minutes of the frame which included Greenie’s goal.  Also, in a digital blur, we could’ve sworn we saw a full on ‘adjustment’ that Sasha was doing on the bench before his injury.  Extra credit for anyone who has a screen grab of him dropping trou.

That’s Mr. Coach to you?:  Maybe we’re just not all that smart on team protocol and what is considered established hockey manners (although we do know which forks to use).  Despite the 24/7 insider’s look we reveled in for a month, we don’t fully understand the complete dynamics of the player-coach relationships. 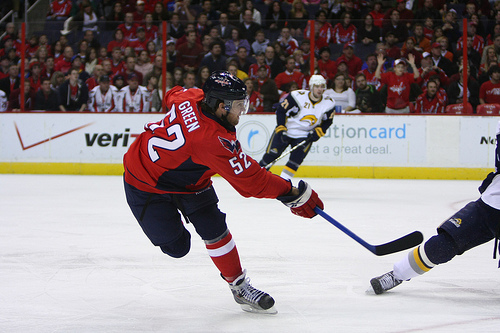 We’re ecstatic that Greenie had that PP score but we were somewhat taken aback in his post-game interview with Jill.  While talking about Coach Boudreau calling out the players yesterday morning for their lack of goals, he referred to him as ‘Bruce.’  We guess that’s cool, right?  Clue us in on what’s proper NHL etiquette, please.

Let the Chips Fall:  We hope everyone has fun @ the Casino Night. We came up short getting tix and our not-so-clever ruse to score access to the affair failed miserably.  The story behind the story is that we’re barred from nearly every casino in the United States. What started off as a simple ‘misunderstanding’ in the Caesar’s racebook one evening led to larger, statewide ban and a lifetime presence in the Nevada Black Book.  And from there it was all downhill.  In our absence we hope you break the bank and please don’t take insurance no matter how charming the dealer is and always split your aces and eights.

Reheating:  Off to Sunrise next Tuesday to meet the Panthers again on their home ice.  Luckily we’ve got plenty of left over coq au vin. Need more Pinot.