Let’s just get this on the record – black pot to kettle black.  Fat guy to Ovi: you look fat, but we don’t think it matters.  Let’s explain. 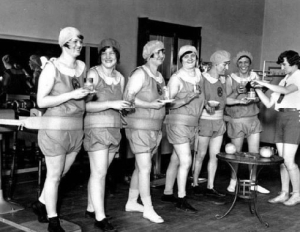 There are few things we consider ourselves expert at.  The appropriate spot for a mid-century Herman Miller chair in your condo?  Check.  The best oil filter for your “88” Caprice Classic?  Meh.  The wrong dress to wear to your friends’ office party so they don’t scream ‘slut’?  We’re on it.  The hottest shirt that’s just tight enough to emphasize your muscular physique, drawing the eye of the lady across the bar directly to you and ending up 9 hours later in a heated tumble of sheets and perspiration?  Um…well, we’re there for you.  Sorta.  Anyway, you get the point.  Gay men = get what makes men hotties.

By and large – so to speak – we are willing to cede large swaths of discussion items to the larger Caps community.  The best third line?  The most needed defense-man?  Coach Boudreau’s best strategies? How to wake up Sasha Minor?  Go for it.  This is our deal: we grant you full latitude…all for the greater good of the Caps, of course…to cover your issues, as long as you leave ours to us.

Reasonable, eh?  Sure.  But it’s become clear recently that we’re needing to draw a sharper line.  There comes a time when we have to sort yours from ours.  And in this case, we’re drawing the line: at mens torsos.

So imagine our surprise – nay, shock – on waking one recent morning to discover Caps Blogistan abuzz over the physique of our Captain, one Александр Михайлович Овечкин.  And by physique, we mean what many in the media mean when they can’t bring themselves to say the obvious: ‘Alex is fat.’  As in: “He’s so fat, when I asked what he wanted on his hamburger he said ‘A hot dog.'” (God bless you, Joan Rivers.)

Whaaa?  A corpulent Cap captain?  A pudgy Ovi?  Imagine our alarm.  Sure, we’ve seen more bulbous ballplayers in our time than Newt Gingrich impersonators.  (Ugh, if you’re offended by any unintended political nods, just substitute “Al Gore” in the preceding knock and get over yourself.)

BUT imagine the HORRORBALLS at our learning moments later that we weren’t asked for a single comment.  Wha?  Not a single comment?!  Not even something brittle, like…‘Ovi’s so fat he stands in front of the microwave and yells ‘Hurry!'” (Thank you, St. Joan.) 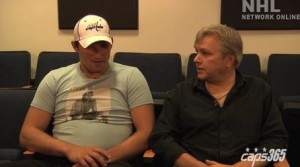 Apparently, all this was spurred by a recent interview with Ovi posted on Caps 365 – which we imagine is just 5 degrees away from Anderson Cooper 360 (not that we’re implying anything) – in which our Captain looked a little, well…zaftig.

Relaxed and reclining in a tight gray Steve McCool T-shirt, Ovi chatted up Mike Vogel about the summer, the new season, the blah blah blah.  What he said didn’t make much news, but how he looked did, how…um…immense…the Great 8 has become.

As noted by noted Caps observer – and svelte correspondent – Dan Steinberg, it seems a lot of you out there fear our Great 8 has become a little too great. Among the comments:

* Holy Poop look at that gut on OV thats the first thing I noticed in this clip.I hope its an optical mishap

* Ovi definitely looks as though he has been “enjoying” his restaurants too much. I wonder if Sid the kid has a beer gut

* Maybe Ovi had Skinmd1 botox put on his cheeks. So his cheeks look more shaped and the lost weight there appears to have gone to his gut.

* Actually, if you look at his sides when he lifts his arms, his side and waist are almost flush, there are no lovies….aka love handles. Hard to get beer pudge and no love handles flopping over the waistline. I’m thinking perhaps it’s all about the slouch or maybe he has some sort of wrap on him.

Apparently for many of you out there, Ovi’s zone was needing some elastic and velcro.  Steinberg and others rushed to Ovi’s defense, citing what they posit as an “optical illusion” regarding Alex’s mid-section.

OK.  “Optical illusion”?  For all the ladies out there, consider this our tip into the fragile male psyche.  Only a straight male could consider a tire around the midsection as an ‘optical illusion’.  Our advice: it’s best not to call them on this.

Take it from us: we know from whence we speak.  Just one year ago this Puckbuddy was a svelte 155 – and feelin’ fine.  These days, following a year of playoff disappointment (ha!), too little exercise and too many beers, we’re topping the scale at 180.Pudge City, you need to get back on the exercise bike workout guide plan.

But here’s the thing.  Beyond the fact that even at our advanced age we’re still able to shed pounds and build muscle (just wait until December!), professional athletes – like the rest of us – bounce around in the buff-o-meter.  The immense demands they make on their bodies and their youth guarantees that they are able to step back into prime shape – with the right work.

Moreover, being ripped doesn’t make you a good athlete – just something pretty to look at.  Trust me: I was less healthy when I was a nude life-drawing model than when I’ve been a few pounds overweight.  (And no – you will never find drawings of me nude on the web.)

In short, fit doesn’t always mean no fat. The best athletes aren’t always the most conventionally attractive, but by their skill and will they become as hot as the hottest latest newest nudest male boy toy.  And at 26, fat can burn off fast to reveal ferocious energy.

So look, if you’re wanting hot shirtless hockey guys, we’re always going to have them here.  But in the long run, if you’re worried about Ovi…take a breath and remember that he’s still as good today as he was last year, or the year before that.

Today, I’m a fat guy.  Ovi, you may be a bit overweight.  Whatever.  I’m pot black, you’re kettle black. I have no worries that, come the new season, you and I will be in fighting shape.  And we won’t need the Shake Weight to do it, either.

This entry was posted in Uncategorized, Washington Capitals and tagged Alex Ovechkin, Believe it or not, Ovie's not going to like us, pot calling the kettle black. Bookmark the permalink.