It was our loss that we never had the chance to meet or work with retiring Caps flack / Media Relations Honcho, Nate Ewell. 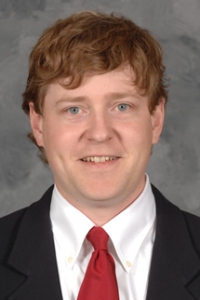 Nate is moving on to be the top media guy for college hockey.  In his Caps years, Nate was instrumental in reaching out to and credentialing online media. There were some who suggested that his sudden departure was due in some small way to the PuckBuddys sudden arrival.

We don’t buy it, but we could foresee that at some point we may have proved challenging for his shop. We are after all journalists and flacks ourselves in our day jobs, so we know what guys like Nate have to deal with on a daily basis.

And you thought the guys on the ice can be difficult?  Communications challenges must no doubt exist on both sides of the glass.

OFB’s Andrew Tomlinson has a cracker jack piece on Nate’s years with the Caps and his impending exit.  It’s a real good read.

Good luck Nate.  We’ll never know what it was like to work together and Ewell never know just how damn charming the two of us can be.

Proudly serving gay hockey fans and players since 2010
View all posts by Craig →
This entry was posted in Uncategorized and tagged Bad puns, Flacks are people too, Nate Ewell, So long farewell auf wiedersehen goodbye. Bookmark the permalink.