Stockholm on the Potomac

One of us has to say it.  Sadly, I drew the short straw…so here goes: 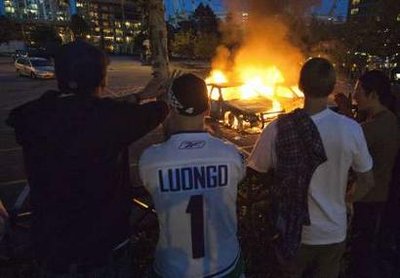 Now, while we all wash the vomit from our mouths, it’s worth noting some surprises from last night.  Beginning with Canadians riot?  Really Lois – really?

As “riots” go it’s clear Vancouverites could use a little schooling.  We burn more cars in Detroit when the mayor sexy-texts his lady or the calendar turns Tuesday, which is to say just about all the time.  But strangely we’re not assholes about it – it’s not like we go out of our way to beat up dudes wearing the wrong sweaters.  So in short – and we never expected to be saying this – nice way to piss all over Lord Stanley’s cup, Canucks.

But enough ugliness.  Time for a little pretty.  Or humpy, as the case proves.

We’re all about looking forward today – to Joe B & Locker back on our TVs, to Varly’s next groin injury, to burrito cannons and mites and a Slapshot desperately in need of an intervention, and to Sasha’s…well, just being our Sasha.

Speaking of, we’ve had a distinct Russia House-sorta vibe on the Caps bench of late.  But that’s changing – this next season looks a little less Volgograd and a little more Malmö.   To which we say simply Skål!  So to the ranks of Papa Swede and Baby Swede, we add one more swedey-boy: Mattias Sjögren (also looks like our umlaut key is going to get a lot more work this year.)  We want to welcome him, PuckBuddys-style.

As first reported in the Swedish “newspaper” Arftenblarf or something, the Caps signed Center Mattias Sjögren to a two-year deal at $1.8 million dollars, which buys a lot of herring.

He’s young, 23, and big, 6’2″ and 216 pounds, and has never played in the U.S. before, logging time with Swedish pro teams Rögle and Färjestad (what did I tell you about the umlaut?)   Katie Carrera reported that he received “numerous” offers from NHL teams, but eventually settled on DC because “I liked everything when I came over…I could see myself in Washington.” [Just wait until he tries to ride Metro].

And he’ll have friends – or at least one – built-in: Marcus Johansson.  Seems MoJo and Matty are pals from earlier days, and the Caps center gave Washington the big sales job.  We know we’d buy just about anything from him.  Matty’s described as a “big strong forward” who “likes to play physical.”  Ufda…we’re officially in Sjögren-swoon. 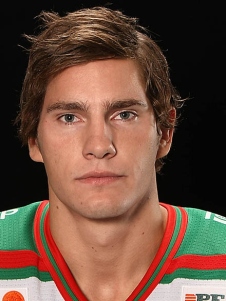 Reaction in the U.S. was generally good – “just the kinda guy we need on the second line” and that sort of thing.  Lord knows if we end up letting Brooksie go we’re gonna need some big, someone who knows how to use his body to stop pucks and agility to get some heat at the net, and someone to keep Semin focused.  (We’re not sure that anyone can actually do this, but a big-slab-o-Stockholm might be worth a try.)

Meanwhile reaction in Sweden was…um, hard to understand.  Mostly because it’s all in Swedish.  Which would be fine if we were still living in da U.P. and could just roll into a bar and ask any drunken chunk-head – which is to say every chunk-head – what it means when someone says “Han har guldkant på hockeylivet!” but we don’t.  We live in DC now so have to rely on the Google for stilted translations.  (We tried listening to his interviews to see if we could recall anything from our youth but it was like listening to a Bergman movie so we quit.)

This Stockholm blogger describes Sjögren as “humble, soft-spoken” and a fan favorite in both towns he’s played in.  He also notes that even at a young age he sported the “A” in Rögle, which shows he might not just be good but a leader as well.  In short, he’s describing a Volvo – something sturdy and reliable, maybe a little clunky, but worth the money and sexy in its own way:

“He’ll play to earn the money he gets, and I don’t think he’ll be going up and down. Give him time, like MJ90 got, to get used to the North American rinks and style of play, and you’ll get long term out of a player like Sjögren. He’s a catch, as they like to say.”

Look for Sjögren to arrive in Hockey Capital sometime around August, in time for training camp.

3 Responses to Stockholm on the Potomac