Dear Canes, We Still Love You

Scott and Mike, otherwise known as “S&M,” check in with a Hurricanes update. Their squad is struggling too, but they remain hopeful. Of course they do; they’re season ticket holders! Friday night saw a 1-0 loss at home against the Sabres, but they bring us huge news about their team’s Number One pin-up boy, the too-cute-for-words, Jeff Skinner – he can now be had in bobblehead form!

There are days when it’s hard to be a Canes fan. Every year we go through a stretch at some point during the season that we just don’t seem like we have it together. For some reason it tends to come near the start of the season (remember 15 straight without a win a couple of years ago?). Well we’re going through one of those right now. If you listen to the crowd at the RBC center you’ll hear fans who are upset, to put it mildly. Sure we could fire the coach, change-up some lines, remove a C, or a number of other things.

Yes it’s frustrating to watch a team we are all so passionate about play so poorly, but my goodness people, every time we mess up (and it’s a lot) can’t we just roll our eyes and tweet about how we’d like more male members of the Storm Squad instead of firing the coach, who had nothing to do with our defensemen picking their nose?

Sure we are complainers like the rest of them, but at the end of the day it’s our team, and dammit, we don’t suck.

We’re a good team that was built on youth and our time will come. There were and still are high hopes that this is the breakout year. Maybe they need more time to gel, maybe they need that elusive chemistry to get on a roll. 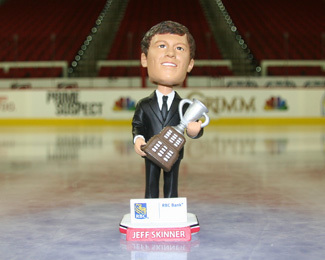 But we have something that no one else has. Jeff skinner. C’mon, the kid’s a stud, in more ways than one. He’s been carrying this team for the whole season. He’s the only guy on the ice that we don’t get nervous when he has the puck. He has the ability to create a goal out of what was surely a turnover and breakaway for the other team. And not only that, he’s a bobblehead now. So there’s no stopping him now.

As Canes fans, it’s been a rough start. But as Canes fan we know we’ll turn it around and be that team that no one wants to play come March and April.

We’ll have our ups and downs, but instead of dwelling on the downs, we’ll look for the ups and build on those and ride it into the playoffs. Or hope that Mike Murphy (Charlotte Checkers…Canes farm team) keeps tweeting pictures of his teammates playing ping pong…shirtless.

Follow these guys on twitter or Jeff Skinner will pout. Scott is @imsmax and Mike is @SiesFire.