Joseph files on the humongous big problem his Flyers have in net:

Sitting here while gearing up for the NHL All-Star Weekend, a series of events that I have always enjoyed but have grown fonder of in light of last year’s changes, I find myself lost in reflection of the Flyers’ season thus far.

The first 48 games contributed to a dramatic storyline that saw the hardship we hoped would be avoided this year roar up from many seasons of continuous heartache. While the emergence of a solid rookie class has surprised all in Philly, the loss of Chris Pronger for the season (and career?), the constant revolving door of concussions and other injuries, and the disappointment of Ilya Bryzgalov between the pipes are all reasons to be concerned.

Granted, the rookies have filled in nicely and, while some would argue that the Flyers haven’t missed a beat with the injuries, I would rather say that they held up quite nicely and exceeded expectations (with some faltering, as is to be expected). 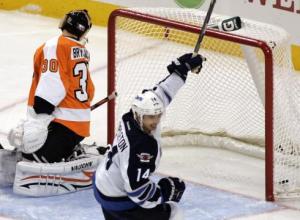 No, I don’t look at the defense and scream “get back!” this year, and getting the puck on net is, thankfully, not an issue.  Should a puck be fired at our own net, however, I cover my eyes like I’m 8 and I just walked in on my parents having sex. This year, I once again turn to the goalie carousel emerging before the All-Star break and leading us into the second “half” of the season.

Signed to a $51 million dollar, 9-year contract in the off-season, the NHL’s #1 free agent goaltender Ilya Bryzgalov, has played, at best, like Kris Humphries in a room of Kardashians… slow, dumb, and repeatedly confused. I’ve had it, and I’m here to make my stand. Let’s proceed.

The fact that Bryzbee (his level of play changes like the wind…get it? Frisbee?…oh boy) arrived in Philadelphia, one of the largest NHL markets and most sports-crazed cities in North America from the little blip on the sports map that is Phoenix, certainly makes an impact.

The shock and nervousness associated with playing in front of a raucous, diehard fan base must be overwhelming for any player.  Maybe for about two or three games. After the initial butterflies are expelled, the talent should shine through. Right? Bueller?

To date, we as fans have seen nothing more than consistently inconsistent play comparable to Michael Phelps simply forgetting how to swim this summer.  He flops around worse than a fish out of water. His reaction time is slower than the captain of that Italian cruise ship that crashed last week.

His post-game interviews are cryptic puzzles of nonsense. He’s terrible. We can no longer wait for him to become the number one goalie we all thought he would be. In 32 games played, Bryzbee has an 18-10-4 record with a GAA (Goals Against Average) of 2.99 and a SV% (Save Percentage) of .895.

His backup, Sergei Bobrovsky (affectionately nicknamed Bob) has an 11-4-1 record with a GAA of 2.42 and a SV% of .919. On Tuesday, he recorded the Flyers’ first shoot out win of the season and is riding high after winning three of his last four starts.  The hot hand, clearly, belongs to Bob. The team plays better in front of him, the fans don’t have random heart attacks when the  opposing team enters the zone, and Bob is playing like a man with nothing to lose because, well, he has nothing to lose. 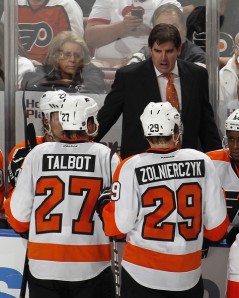 As we approach the home stretch of the season, there has been more than enough time to analyze the strengths and weaknesses of a team of randoms that came together in the offseason and have put together one hell of a season thus far.

A lot of that has to do with Peter Laviolette who, I believe, should be a front-runner for the Jack Adams Coach of the Year Award (a whole different topic for a later time). With four lines of offensive dominance and a young, consistent defense led by a veteran core, the attention turns to the disappointment in net.

Ed Snider clearly wanted to get the goalie we in Philly have been crying for since the days of Ron Hextall. The move in the summer to secure Bryzbee was a good one, in theory, but not all risks pay off. It’s time to lose the baggage, hand over the reins, and put the last piece of the puzzle together before we get any closer to the playoffs. Bench Bryzgalov.

All we wanted to see from him was a little fight to show that somewhere inside that loopy mind of his, a top-notch goalie exists. On Sunday vs. Boston, we saw Bryzbee throw some punches after getting steamrolled in the net. The fight, I believe, came too little, too late.

Proudly serving gay hockey fans and players since 2010
View all posts by Craig →
This entry was posted in Philadelphia Flyers and tagged Bobrovsky, Bryzgalov, Humongous big. Bookmark the permalink.