The 2012 NHL Draft, held in beautiful Pittsburgh, has come and gone. The lobby of the Omni William Penn no longer has 4 radio stations fighting for space, and there’s no more synthetic ice outside of Consol Energy Center. 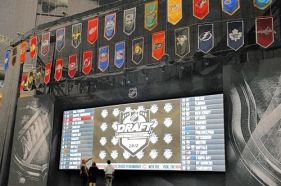 In a great turn of events, my ears have finally stopped ringing from the boos that flooded the arena whenever the Philadelphia Flyers were on the board to make their next selection. Nail Yakupov was taken first overall, as was expected, and the weekend was full of an excitement and energy I’d never before experienced firsthand. And now that the dust has had a little time to settle, let’s take a look at what the Pittsburgh Penguins did, ‘cause they certainly made some noise of their own. 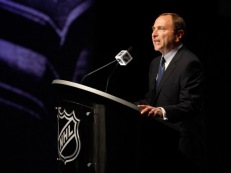 The Penguins were slated to make their opening selection with the 22nd pick. After the Minnesota Wild were called up to make their first-round choice with the 7th pick, I left the media area to rejoin some friends with whom I’ll be sharing a season ticket package this coming year. We chatted for a while and caught up, getting ourselves ready for the Carolina Hurricanes’ pick. And then Gary Bettman approached the podium as he had done earlier to announce deals like Višňovský to the Isles and Ribeiro to the Capitals. He had, it seemed, another announcement to make, one “of particular interest” to the crowd on Friday night.

At that moment, Jordan Staal, who had earlier in the week rejected a contract extension that the Penguins put in front of him, was shipped to Raleigh, North Carolina, where he and his brother, Eric, will suit up together in the fall.  The crowd roared, partially in disbelief, partially in celebration of what the Penguins got in return in the form of Brandon Sutter, defensive prospect Brian Dumoulin, and Carolina’s 8th pick. It was a truly electric moment that I felt lucky to be able to experience from inside Consol.

Oh, and it was also Jordan Staal’s wedding night. (Side note: girl, why you gettin’ married on a Friday?) With that 8th pick, the Pittsburgh Penguins selected defenseman Derrick Pouliot, a puck-moving defenseman who doesn’t have a ton of size but possesses quite a bit of skill. He fits right up in the same class as Despres, Morrow, and Harrington, all recent draft choices made by the Pens. As I told my friends, Ray Shero certainly has a type.

When it came time to choose again, they nabbed Olli Määttä, yet another defenseman. He’s bigger, he’s stronger, and he’s going to need to work on his skating, but he was, in my view, a pretty solid choice.

I was frankly a little surprised he was still available when the 22nd pick came around, but there were certainly plenty of surprises in the department of folks who went lower than anticipated (see: Forsberg, Grigorenko).

The Penguins weren’t done, though, after the first round had come to a close. While most folks were leaving (or had already left) Consol for the night, Ray Shero was making trips back and forth between his seat and the Phoenix Coyotes’ table on the floor. Speculation seemed to point to a deal for Keith Yandle, but he wasn’t part of the trade that was concluded. Alas, one of my favorite Penguins, Zbyněk Michálek, was sent back to the desert in exchange for Harrison Ruopp, Marc Cheverie, and a 3rd round pick. It’s clear that this was a move to free up cap space. If there were whispers of the Penguins trying to land Parise and/or Suter after the Staal move, this trade certainly dispelled any doubts about it.

On Saturday, which was rather anti-climactic after Friday’s insanity, the Pens grabbed the following players in the remaining rounds: Teodors Blueger (C), Oskar Sundqvist (C), Matt Murray (G), Matia Marcantuoni (C), Sean Maguire (G), Clark Seymour (D), Anton Zlobin (RW). Heavy up the middle, another defenseman, and a winger with their final pick. No real complaints from me, save the question of whether or grabbing a winger a little sooner might have been beneficial. But, hey, this is all a guessing game on some level, anyway, so there you go. 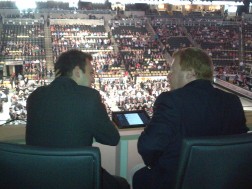 On a personal note, I’d like to thank Craig and Doug, and the NHL for allowing me to attend the Draft on my home turf. It was full of unforgettable moments and experiences (you know, like meeting Patrick and Brian Burke and thanking them for their efforts, which tops the long list), and I hope to be fortunate enough to attend again sometime in the future. I’d also like to send a shout-out to all of the lovely people that I met and to those whom I was very, very happy to see again after meeting in Toronto last month.

Before signing off, I’d also like to thank Jordan Staal and Zbyněk Michálek for their contributions to the Pittsburgh Penguins. 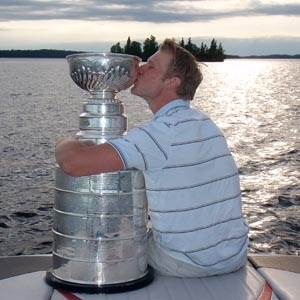 Jordan Staal was an integral part of the Penguins roster; he will be missed. He helped bring the Stanley Cup back to Pittsburgh, and his tireless work at both ends of the ice will never, ever be forgotten. And he deserves a special mention for doing all of these things with Tyler Kennedy on his wing much of the time. Just a couple pieces of advice, Jordan: never let your hair get that long again, keep rocking that backhand shot high to the glove side, and try not to hurt anyone who’s standing 2 feet to either side of the net when you inevitably miss a one-timer from the slot or circles.

Zbyněk Michálek spent 2 years with the Penguins and, in his first season, displayed the kind of shot-blocking, stay-at-home defense that the Pens were sorely lacking. His second season was rockier; he never quite found the same form that he had during his first year. That said, I know I’ll miss him back on the blue line or, perhaps more accurately, sprawled out on the ice at the edge of the crease in an attempt to block a pass or shot on the penalty kill. He’ll do well back in Phoenix just as he did before he came to Pittsburgh. I have to think he’ll enjoy being back out in Czech Republic West and wish him nothing but the best.

Next up for me? Giving Penguins fans a serious tongue-lashing in response to the whack-ass, embarrassing #smearPaulMartincampaign that set Twitter aflame.