No Bull: You Can Play

It’s a weird way to start this post, but I have to admit it was actually a bit disappointing to learn that what I’d understood to be a “You Can Play Team Night” at the Cow Palace was instead a full on “LGBT Night” event hosted by the ECHL’s San Francisco Bulls.

My initial concern was (of course, in retrospect) unfounded. I absolutely don’t have a problem with a team hosting a night to recognize their LGBT fan blocks — we exist, and thank you for acknowledging that! — but I was looking forward to a night specifically to celebrate and encourage and support athletes who happen to fit one or more of the LGBT letters, whether or not they’re still in the closet. The message of acceptance that is the laser-like focus of YCP fits so well in a pro sports arena, and I felt a little let down to learn that it was going to be what I imagined would be “just” a big gay rainbow rah-rah affair.

I’m not afraid to admit to being a bit of an idiot (of course! in retrospect) for having any concern at all about the wholehearted and honest embrace a hockey team bearing the name of San Francisco would give their LGBT fans; foolishly unfounded concern, in fact, when I was well aware that very same organization had the stones and delightful audacity to join in an event that was exactly as it sounds: Drag Queens On Ice. No, really.

LGBT Night at the Cow Palace, Saturday, March 23, was a total blast, done to the nines by the Bulls organization. The 4-1 defeat was a letdown, but our section was rocking! I had the pleasure of sitting near several people who counted this as their very first hockey game, so in addition to heckling the refs and jeering nearby folks in Stockton Thunder gear, there was some serious hockey evangelism taking place in the stands:

Yeah, that awkward moment: trying to explain icing to a noob. Totally happened.

The Bull’s fantastic YCP video was featured on the scoreboard during intermission, which received a rousing cheer from around the rink.

Later, Chuck-A-Puck ensued. Strangely, although I share a name with the game, I didn’t win. Yet again. I never do, alas.

I’m ashamed to admit I’d never been to the Cow Palace before, but I was generally charmed by the venue and the way it operates on game day — especially the mechanical bull, which is an entirely apropos and hilarious feature!

We had fairly inexpensive seats, yet the views were great — a fraction of the cost of seats with similar distance to the ice in an NHL arena. In fact, if anything, I thought our seats were a bit low to the ice! Reasonable ticket prices freed up the concessions budget, which is always appreciated, and ever so important, given the expansive beer garden behind the end boards. 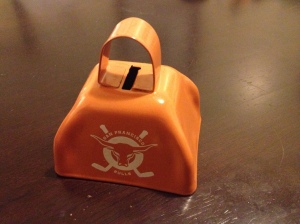 All event staff I interacted with were incredibly friendly and outgoing, and the atmosphere was much more easygoing and loose than the NHL experience, where there’s an intensity that follows the game at its very highest level. Free shuttles to BART / Muni made getting to and from the Cow Palace a breeze.

As both a hockey fan and a (very amateur) player, I thought the game was so interesting to watch. It was so cool to see how the ECHL doesn’t deliver perfect hockey — and I don’t mean that as a bad thing in the slightest. If you’re used to watching the NHL, it’s the story of the day when a play goes wrong. Watching possessions develop at the ECHL level was a totally different experience. Passes that aren’t always on target, and sticks that aren’t always in just the right place completely change the game. There’s a fantastic unpredictability when you watch and always have to wonder if the play is going to break down.

Thanks to the San Francisco Bulls for inviting all us hockey lovin’ homos into their house for the evening. I hope everyone else in attendance had as good a time as I did! I’ll definitely be back soon, and wish the Bulls all the best of luck in the upcoming Kelly Cup playoffs!

This entry was posted in San Jose Sharks, The Minors and tagged SF Bulls, You Can Play. Bookmark the permalink.

2 Responses to No Bull: You Can Play